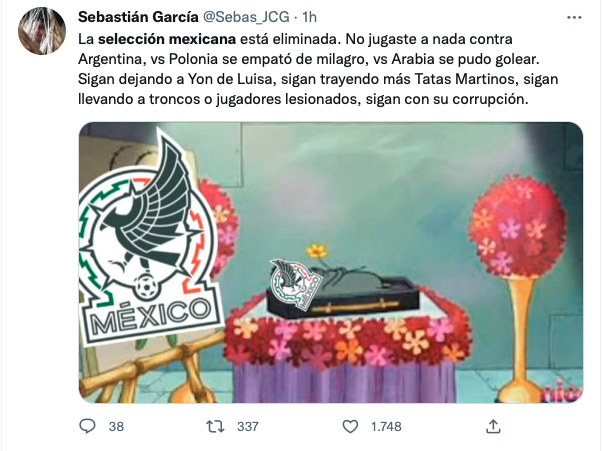 The digital conversation has become an important fact in the time we are currently in. Given this, after the elimination of the Mexican team from the Qatar 2022 World Cup, the trends and reactions of Internet users on social networks have been unleashed.

Although it seems not a very valuable piece of information, currently, social networks represent a new communication channel worldwide, which is why there are 4.62 billion network users worldwide, representing a year-on-year growth of more than 10 percent, according to data from We Are Social and Hootsuite.

Every day people join the digital conversation, where geographical barriers are over, from that the Internet was implemented in the daily life of people, we can learn about new things that are found in different parts of the world or that are in another language or culture.

In Mexico, a country with one of the largest populations, it is normal for digital conversation to be countless, where the same investigation refers, that currently 78.3 percent of the national population accesses social networks, which represents 102.5 million people in the country who make use of the various social media platforms.

This Wednesday the last game of the Mexican soccer team in the FIFA World Cup was recorded. After beating the Saudi Arabian team on the field, the numbers accumulated in their performances in the classification in the Middle East, they were not enough for the nationals to go to the next round, before that, social networks have witnessed memes, comments and even hashtag of the fans.

From tags like #FRACASO, which registered more than 30,000 tweets, #SeleccionMexicana with more than 10,000 tweets and #UNOMÁS with 90,000 comments, can be seen on the Twitter social network.

Read:  AMLO rules out the risk of economic recession for Mexico in 2023 for these reasons

But also, the Mexicans, who are very creative despite the sadness of the elimination, shared the best memes and jokes around the moment.

All of Mexico seeing that the Mexican team approaches the goal every 2 minutes but does not score the goal:#MexicovsSaudiArabia pic.twitter.com/us6gWmXsPy

The Mexican team is like the students who have failed everything and at the last minute want to get through with a lot of effort, they do very well but they don’t make it.

This meme always applies to the Mexican National Team… pic.twitter.com/0BFOelutYB

The Mexican team is eliminated. You didn’t play anything against Argentina, against Poland it was miraculously tied, against Arabia it was possible to thrash.
Keep leaving Yon de Luisa, keep bringing more Tatas Martinos, keep bringing logs or injured players, continue with your corruption. pic.twitter.com/DTWL3OCZTy

Better to avoid us so much, I farted, you have to give the cup to Kevin Álvarez for being handsome#Mexican team pic.twitter.com/iRkF2AZZ5C

LITERALLY THE MEXICAN SELECTION IS THIS 🇲🇽🇲🇽🇲🇽🇲🇽 GO MEXICO: pic.twitter.com/g1rmlA53yj

This is how it stays when I celebrate Mexico’s third goal #Mexican team #MexicoVsArabia pic.twitter.com/mHrhkm65Mg

Ah, but in the last minutes the Mexicans are very hopeful that Argentina will score another GOAL

me in chinga: #Mexican team pic.twitter.com/YPstsxASe4

And this is how, once again, people use the digital space to share their opinions on any eventuality that may be taking place in the world, positioning it in the best place.

This is the Uber of Qatar, with Arab sheikh-style transfers

While in Qatar, Werevertumorro’s restaurant is shut down