This is how social networks report an earthquake 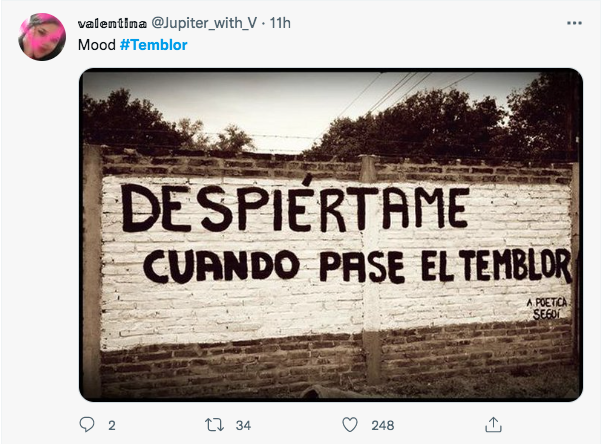 It already seems like a tradition, because, once again, a new earthquake has shaken Mexico City and surrounding areas, and social networks are there to make it known.

Definitely, September 19 is an iconic date in the life of Mexico, a date on which, as is well known, the 1985 earthquake is still in force in society; however, what happened in 2017 is also one of the most tragic and complicated events for the Mexican population.

It is clear that Mexico’s relationship with September goes beyond celebrating the beginning of the Independence movementbut, on the other hand, it commemorates one of the events that, in many ways, has marked the social life of Mexico.

As is customary, every September 19 a drill is carried out with the objective of remembering those dates of 1985 and 2017; however, it is also a time when the presence of an earthquake seems to be unavoidable.

just a few moments ago, Mexico experienced an earthquake of great magnitude again; according to what was reported by the National Seismological, we are talking about 7.4 degreesa fact that definitely caused citizens to leave their buildings and, of course, social networks were not left out.

Let’s not forget that we live in an era in which the conversation usually takes place through the different digital platforms that are available in the market.

In this context, we speak of a moment in which, according to data from We Are Social and Hootsuitethere are just under five billion Internet users around the world, a fact that speaks of the great relevance of social networks today.

Read:  Deezer debuts on the stock market and what many expected happens: a disaster

In this way, social networks have not stopped reacting to the earthquake that occurred just a few moments ago, between memes and all kinds of multimedia content.

Is not a #simulacrum #Shaking #Mexico #September2022 #gdl this is not a drill it really happened pic.twitter.com/dIhYIzQTAc