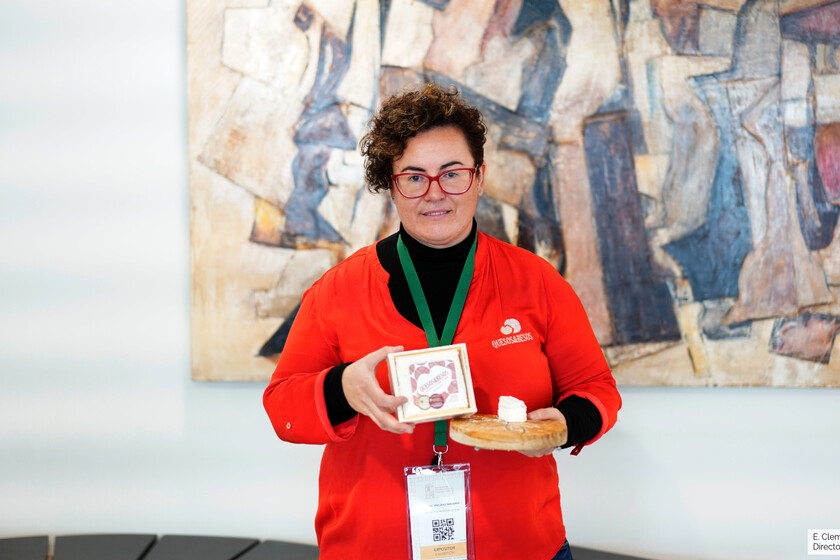 Silvia Peláez and Paco Romero, from the Jienense cheese factory Quesos y Besos, arrive on the second day of the International Cheese Festival in Oviedo as brand-new winners of the title for the best cheese in the world.

The couple, originally from Guarromán, carry a pallet with the cheeses they planned to sell throughout the week. He knows that they will fly in a matter of minutes: there is already a queue of dozens of people waiting for him to arrive at his dairy stand. People take the award-winning cheese with two hands. It costs only 10 euros. It is a unique opportunity.

Peláez tells us that he did not expect to win the first prize at the prestigious World Cheese Awards. After all, your cheese factory has only four years of life and compete against legendary houses. But they have not only won the first prize. Another of its cheeses has reached the grand final, in which only 16 cheeses from all over the world competed. It is the first time this has happened in the history of the contest.

The cheesemaker, yes, recognizes that when playing at home they started with better conditions: “It is true that we presented on Spanish soil with which it has an advantage and that is the cheeses arrive much better. They are very difficult cheeses to submit to competition, because lactic coagulation like ours is a cheese that has to reach its optimum point. There are a few days when it is splendid but then plummets down, with touches more ammonia. If the cheese suffers … It is very difficult to achieve a merit of these characteristics with a cheese of this type. The fact of being in Oviedo, and the climate that it is, has been favorable for our cheese ”.

From paint to cheese

Cheeses and Kisses is a family project, of a couple who decided to return to their village to earn a living.

“We were both born and raised in the fields, my parents are farmers and Paco’s parents are ranchers,” explains Peláez. “We grow up in that environment, but then we take different directions and go to the city. I studied chemical engineering, and I did my career working in an industrial company, in the world of chemical painting. In 2015 we were working in Zaragoza and we decided to roll the blanket over our heads, make the decision to return to our land, retake the rural environment and start a cheese factory ”.

Neither Peláez nor Romero had ever worked with cheese professionally

Neither Peláez nor Romero had ever worked with cheese professionally. Although they knew the ins and outs of its preparation, as their mothers and grandmothers made cheese at home as almost all the women in the area did, they had to be formed from scratch.

Everything stays at home. Paco’s little sister is the rancher of the goats with whose milk this cheese is made. “The goats are from Malaga and they are grazing in the high mountains “explains Peláez. “They are herding and eating everything there is. All that is transferred to the cheese ”.

At Quesos y Besos they are not resting on their laurels and are always devising new cheeses, of unorthodox styles. The proclaimed best cheese in the world, Olavidia, It is a very special cheese, with a type of elaboration not common in Spain, in which the use of rennet is dispensed with.

“It is a lactic curd,” explains the cheesemaker. “It is the lactic acid bacteria that intervene in the passage from milk to solid, to curd, and a giant yogurt is formed. We take a ladle and we are putting it in each mold in the way you can see and in the center we put a capita of ash that comes from the olive bone. That bone is crushed and charred and it is what we use ”.

The other finalist cheese, Camembesus, It is made with a mixed technique. “We add rennet but there is also a decrease in Ph”, explains Peláez. “It has the texture of cammembert, it is very unctuous, but it has other nuances totally different from Olavidia. It is more goat, the ammonia tones come before, it is totally different ”.

An opportunity for Spanish and rural cheeses

Without a doubt, the awarding of these awards supposes a turning point for Cheeses and Kisses, but it is also a milestone for all artisan cheese makers in Spain, an important industry for the recovery of certain rural areas.

“My father-in-law is retiring and there was a risk that this livestock would be sold and an entire impeccable facility would be left empty,” explains the cheesemaker. “Thanks to our cheese factory we can pay for that milk very decently and Paco’s little sister has taken up livestock in a dignified way. It is something that we are taking advantage of, because it remains at home, but it does generate those jobs in rural areas that were being lost ”.

The award, says Peláez, also supposes “a dose of energy for the rest of the artisans, who see that doing things well, with perseverance, with work and with effort the rewards are coming ”.

Breaking Bad would have had a GTA-style game

All of Goku’s victories in Dragon Ball have a strange element in common.