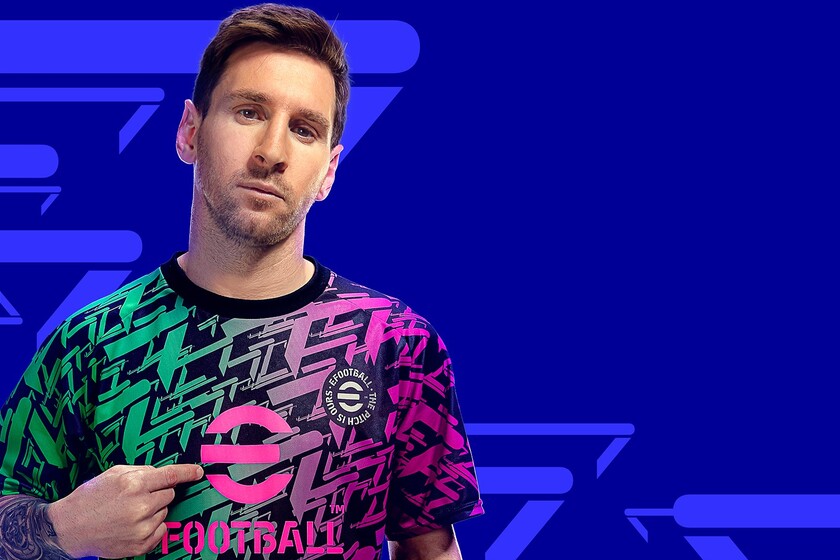 It is no coincidence that eFootball 2022 debuts on PCs and consoles the day before FIFA 22 hits the shelves: this year Konami seeks and encourages players to make a direct comparison between the two giants of the beautiful game in video games. And that his soccer alternative becomes free and totally multi-system it’s too powerful an added double claim not to give you, at the very least, the benefit of the doubt.

On Extra Life We had the opportunity to see first-hand the bulk of the news and the great plan with which Konami plans to rebuild the mythical saga Pro Evolution Soccer from its foundations. In the literal sense and also in the technical sense, since eFootball 2022 It has been completely developed with the Unreal Engine as a base. But, above all, in relation to his new game model and the gradual unfolding of his own experience.

eFootball 2022 it intentionally moves away from the classic format of soccer games that has accompanied us for decades to bet strongly on the philosophy of the game as a service and, in the process, unify the entire community of players and football fans under the same football experience, including those that come from mobile devices. A huge digital court where everyone plays with everyone.

From here, it is necessary to ask the question of rigor: How much PES is there in eFootball 2022? The short answer is that Konami plans to show the inheritance of its football saga in the gameplay at launch and in the future, between autumn and 2022, also through the reunion with several essential contents and the historical modes of Pro Evolution Soccer.

Index hide
1 The evolution of PES, a new era for Konami football
2 This is how eFootball envisions the future of football in video games
3 Revolutionary or not, eFootball will take the brave step that PES needed

The evolution of PES, a new era for Konami football

eFootball 2022 is not a rebranding of PES: it is a new stage for Konami in terms of its football deployment in video games that is born from the base and the experience gained over 25 years of PES. However, the inheritance from one game to another will only be reflected in what is playable at the time of launch: regarding the initial content there will be nine licensed clubs and we will be able to play, in essence, to Test matches and Online events.

Being more specific, the Master League will arrive later and on a date to be specified, and regarding the official teams we will have at our disposal the FC Barcelona, the Juventus (in FIFA 22 they have Piemonte Calcio), the FC Bayern München, the Manchester United, the Arsenal, the Corinthians, the Flamengo, the São Paulo and the River Plate.

As confirmed by Konami itself, the new batch of licensed clubs will arrive with the fall update without specifying names, origin, or quantity. In fact, the roadmap also has a Team Editor planned for before 2022 and for the winter update, a dedicated mode called Match: Authentic will be implemented in which all available teams will be enabled.

As an additional addition, we will hear the voices of Julio Maldonado again “Maldini“and Carlos Martínez when we go out to the field in case we bet on the Spanish version, while Rodolfo Depaoli, Claudio Palma and Christián Martinoli will lend their voice to the Argentine, Chilean and Mexican broadcasts respectively, among other announcers.

That said, when adjusting the gameplay Konami has had the advice and endorsement of two football titans: Andres Iniesta and Gerard Piqué They have been directly involved in the development of the game when it comes to giving new strength and identity to the touch of the ball and defensive duels.

To which we must add new tricks, such as the new Power Kicks system, an optional shooting system with new animations both for shooting at the goal and for making precise passes in which it is sought to reward the player’s technique with the spectacle of a good cannon shot; or a rethinking of defense through the use of the left triggers.

And what about the online experience? Discovering it will be the true litmus test of eFootball 2022, but we have already been confirmed that the game will have dedicated servers.

In other words, Konami is fully aware that the greatest asset of PES have always been the sensations that he has transmitted to the controls, and he wants eFootball 2022 inherit and continue to project that well-deserved image forged over a quarter of a century to fans; but -logically- closing only to what the previous installments already offered is a mistake.

Read:  Bridge of Spirits details the use of adaptive triggers on PS5

eFootball is completely free-to-play and has been designed to be played on all gaming platforms with the notable exception of Nintendo Switch, but both concepts they have nuances.

Regarding free, there will be paid content that we can purchase with game currency or real money, including a system of Match passes Seasonally with exclusive rewards and premium objectives. That is, the more we play, the more rewards we will receive.

eFootball PES will be free to launch, although there are what we can consider paid editions for all systems and that have been called Premium Player Pack. These are valued at 39.99 euros and include, in addition to the game itself:

As for the multiplatform, and this is the interesting thing, we can access eFootball 2022 and our progress made from any system. The game will be the same on PC, new and current consoles and even on mobile devices, although technically it will accommodate the possibilities of each system. Konami has confirmed to us that the PS5 version will make full use of the haptic capabilities of the DualSense controller.

However, the full multiplatform will take a little longer to arrive.

Konami plans that by 2022 the mobile version will receive an update that enables the possibility of playing with traditional controllers and, consequently, cross-play between all systems will begin.

At this point, it is time to talk about the eFootball roadmap: although the launch is a touchdown that is strategically anticipated at the start of FIFA 22, Starting in autumn, classic modes and long-distance experiences will begin to arrive, including a Creative Team mode that would come to replicate My Club and the Master League itself.

Revolutionary or not, eFootball will take the brave step that PES needed

Comparisons between PES and FIFA have been unavoidable for years, and Konami breaking the deck this season is a risky but interesting move– While it will be necessary to purchase a copy of the game from EA Sports in order to play on each system, eFootball 2022 It will come to everyone for free and opens the door for us to continue our games and progress from the mobile, the PC or the console that we have more at hand.

And not only that: although we will have to wait until the end of the year to receive the total cross game, which there will be, when this happens there will be no possible excuse to improvise games with who we want, where we want and when we want. That, however you look at it, is a total success that plays very in favor of eFootball 2022.

That said, there are two nuances that ugly this interesting move:

Take over the saga PES It is a responsibility, and it is beyond doubt that Konami needed for several seasons to give a boost to its soccer proposal. Taking off that image of continuity should be a priority. From that context is born eFootball 2022 And, although it will reach consoles, PCs and mobiles with a very fair content and full of promises to keep, the way in which it is raised is much more than a mere declaration of intent: it is the biggest hit on the table ever made in soccer video games for decades.

The Batman surprises with an impressive trailer in Spanish

How to unlock the secret ending of Far Cry 6

While you keep chipping diamonds, this Minecraft player completes the game blindfolded in 33 minutes

Is it worth upgrading to Windows 11? I’ve been playing the new operating system for a week, and I’ll tell you how it...

Gotham Knights reappears on the DC FanDome with a new trailer