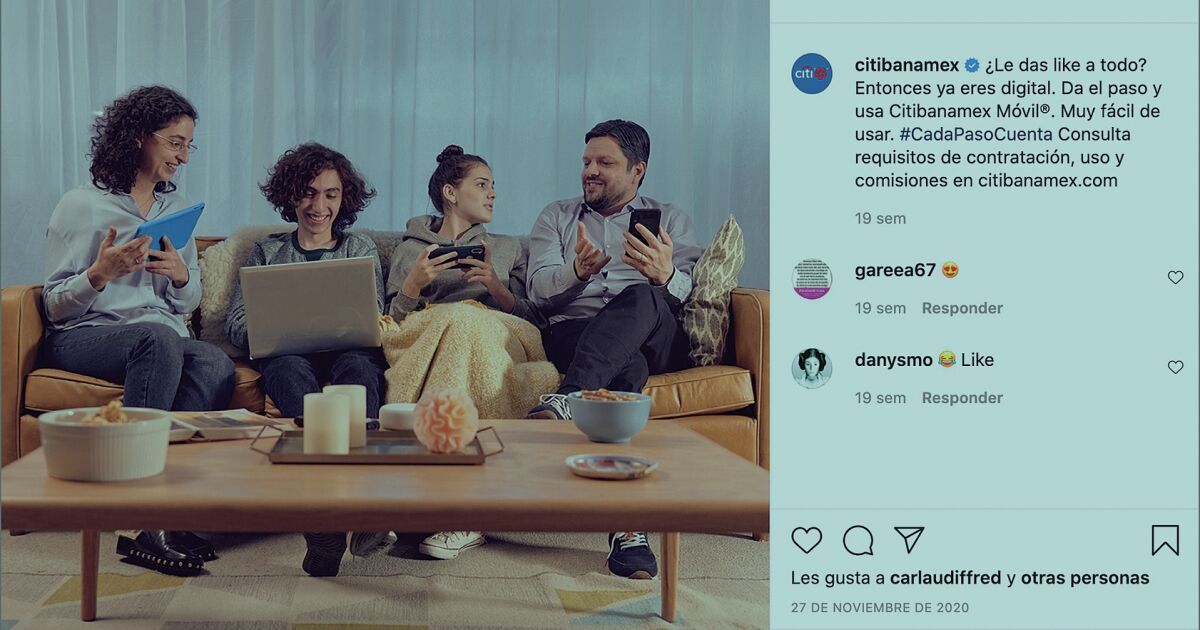 Sergio Eguiarte, Marketing Director of the financial institution, explains that before the pandemic, only 5.2 million account holders had downloaded the mobile app. But some of the customers weren’t even using it anymore. So the bank and its agency designed the ‘You are already digital’ campaign, with the aim of showing their clients that using the application was as simple as making a video call and, why not, almost as easy as asking Alexa to put your favorite playlist.

“Customers saw it as complicated and even in the midst of a pandemic, they still wanted to go to make transactions at the branch. There was a barrier and what we tried to do was show them that they were already more ready than they thought to do all their banking operations from the app, ”says Eguiarte about what was his first campaign for Citibanamex.

But to talk about digitization to its users, the bank had to be on the digital platforms that its users already used. “We had to flood it and infiltrate it to further demonstrate how absurd it was not to be digitized at the banking level when they were already in the world. digital all the time, ”explains María Fernanda Gutiérrez, head of Publicis One Team for Citibanamex in Mexico.

After the campaign, and with the help of the pandemic, the bank saw its app downloads grow by 165%. Today, there are 13.8 million account holders who already have it on their mobile device. Even those who had it and did not use it chose to give it a second chance and at the end of the campaign, 40% of these clients were already back. The bank expected to recover only 5% of them.

Read:  Former Fifa and Uefa presidents are accused of fraud

In addition, the uses that customers gave to the application were expanded. Before the campaign, customers usually used to enter to check their balance and verify that the purchases they had made were in order, but the campaign helped them understand that they could pay for services or replace deposits with electronic transfers without leaving home.

The process to carry out this campaign was not easy: it was necessary to record in the middle of the sanitary restrictions due to the pandemic; However, the creative team was determined to carry out a 360 ° campaign, covering all platforms: open and pay television, radio, outdoor advertising, advertising on digital sites and YouTube, one of the platforms that grew by up to 130% the number hours of content viewed during the pandemic.

Gutiérrez says that filming had to be coordinated and approved remotely and that this part of the creative process was what he most “struggled with”. However, the results of the campaign show that all the effort paid off.

GoPro Hero 10 Black, what you need to know about the new #GeekHunters camera