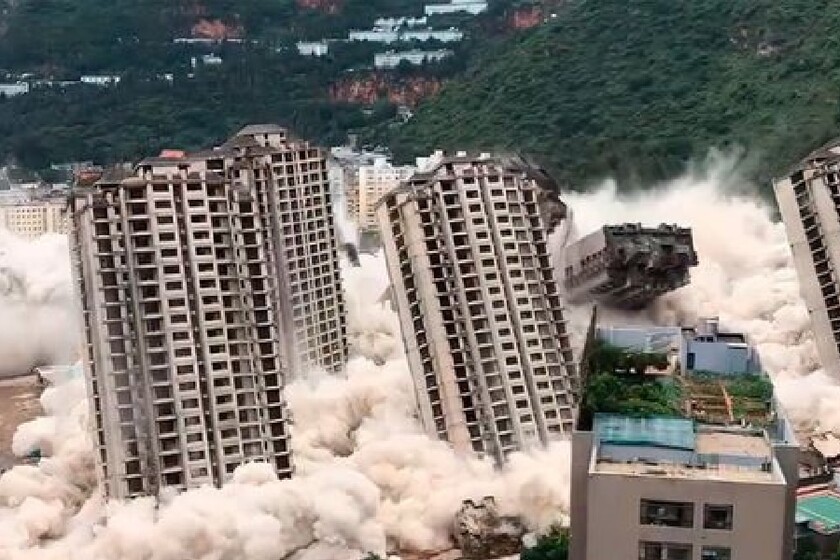 What’s the difference between Akira’s explosion from Neo-Tokyo and this one? Basically none.

In Kunming, capital of Yunnan province, in southern China, there are approximately seven million inhabitants. On August 27, 5,000 of them had to be evacuated so that they were not affected by the planned explosion of 15 skyscrapers that would cover an area of ​​500,000 square meters of the city, some 300 soccer fields one after another. Due to its spectacular nature, the operation is now going viral on western networks (along with an emotional pop ditty in the background that gives an even more surreal halo to the matter) (the most shared video has been erased, so we put a clone post with fewer retweets).

Two weeks ago in the city of Kunming🇨🇳 15 towers collapsed (a “North Port” of Rosario) after being 8 years without being finished. The oversupply of the Real Estate market in China graphically pic.twitter.com/GNGRcWgWZy

The failed Liyang Star City project. The story doesn’t quite fit into the image that some have wanted to project, that of the miscalculation typical of planned economies that would believe that they could force people to move to newly created mega-complexes to later run into the refusal of the population. The Liyang Star City was started in 2011 by Kunming Xishan Land and Housing Development and Operation (Group) Co, with a plan to create both residential areas and parks and commercial life at their feet. A year later the company ran into capital problems, and the work was assigned to another agent in the industry. The bumpy development continued for another year, and in 2015, faced with failures, it was acquired by a government company.

#China 15 unfinished skyscrapers were blown up in #Kunming. The construction of the buildings, which began in 2011, did not continue because the construction company ran out of money in 2013. Few stories for those who make a mistake pic.twitter.com/p8H0pOhUXE

The construction was of poor quality and, almost more importantly than that, what it offered was no longer up to the demands of Kunming inhabitants at the present time, with residences of misaligned sizes and with little access to light. The panoramic views of the explosion show us that those of the city do not lack skyscrapers in which to live a few meters from there. Better to tear it down and do something new later.

The largest scheduled demolition in Chinese history? Could be. It has been compared, for example, to the 2017 explosions in Zhengzhou’s “urban village”, where 36 buildings plummeted in just over 30 seconds. The difference is that, if we trust the data released by the state media, in Zhengzhou it affected almost one square kilometer, 2.5 tons of dynamite were used and the buildings were visibly lower, while in Kunmíng we came across 4.6 tons of explosives placed at 85,000 detonation points.

The lesson seems to be the same: When it comes to pantagruélicos real estate shows, the place to look is modern China. Anecdote 1) The eastern nation used more cement between 2011 and 2013 than the United States during the entire 20th century. Anecdote 2) in 2009 there were 221 cities in China with more than a million inhabitants compared to 35 in Europe, and many of them were new. Anecdote 3) we are running out of sand with which to make cement.

Meanwhile, Evergrande. China’s largest real estate developer announced today in a statement to the Hong Kong Stock Exchange that two subsidiaries defaulted on their guarantee obligations, putting the group “at risk of cross-insolvency.” A group with a debt worth 250,000 million euros. As reported in Cinco Días, the firm “has been trying for weeks to raise capital to meet payments to suppliers, while supervisors and investors observe with concern the risk of contagion to the rest of the Chinese financial sector.” Fear of a detonation, but this is of a different kind.

Belgian GP – Bad day for Alonso at Spa: «I was not comfortable, in the dry we are much better»