Bullfrag
Home Uncategorized This gaming box for your PC allows you to play with a... 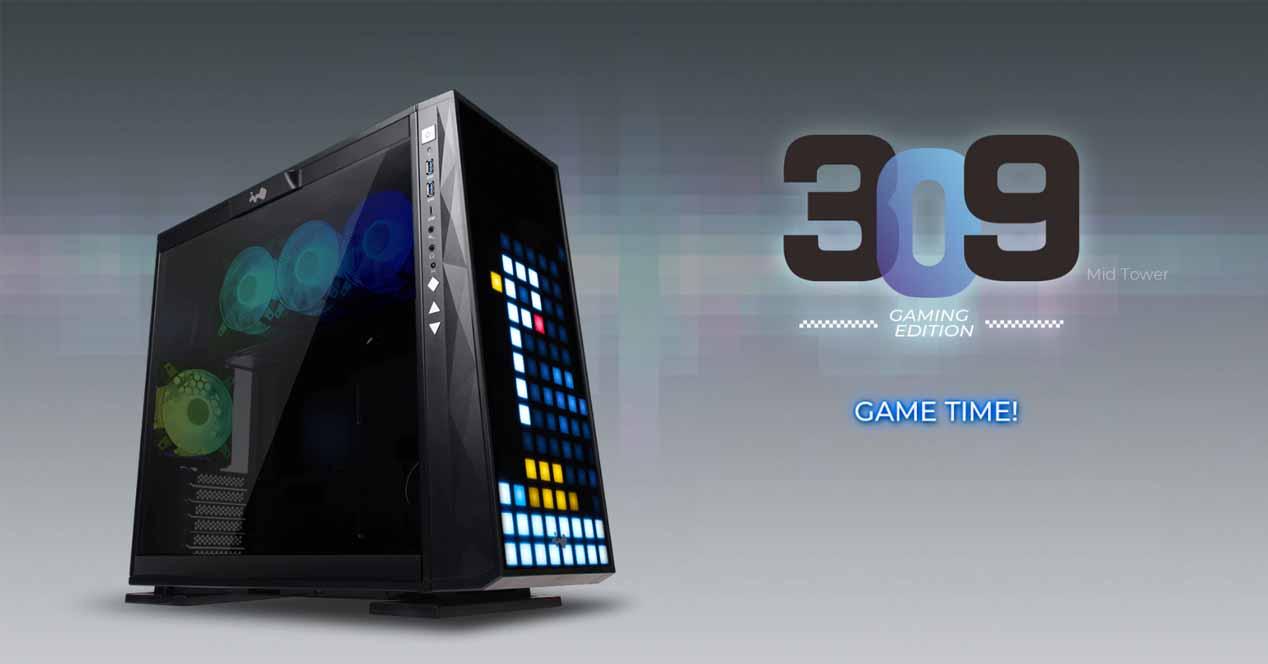 In Win is a manufacturer that has always stood out from the rest in terms of the design of its cases, since they have both extravagant models and with utilities that we never thought we could see in a PC case. It is precisely the case of this In Win 309 Gaming Edition, a box that is of course prepared to house high-end gaming hardware, but that undoubtedly stands out for its front panel and its built-in gamepad that allows, literally, to play in the box. Let’s go to see her.

Index hide
1 In Win 309 Gaming Edition, the PC box you can play on (literally)
2 A box to accommodate your high-end gaming PC

In Win 309 Gaming Edition, the PC box you can play on (literally)

In Win’s addressable RGB LED front panel is a vivid display that is sure to stand out from the crowd; Using its own software (GLOW X), it allows users to fully customize the arrangement of these 144 LEDs to show their creative expression, and is that it allows to configure animations of up to 40 frames with an intuitive and simple interface. In addition, the box also features a internal microphone It can react to sounds and voices with reactive lighting effects.

Four fans In Win Saturn ASN120 Premium products are pre-installed in the box, offering a complete cooling package for gamers to come in and build their new gaming rigs without worrying about having to top up the airflow. In addition, with an excellent ratio between cooling and noise, this box includes of course ARGB lighting configurable in its fans in addition to the front.

Users will be able to configure and control the running speed and lighting of the fans and front end with the brand’s free GLOW X software, but the fans also work with the RGB software on the motherboards. Each Saturn ASN120 fan provides up to 77.17 CFM of airflow and up to 3.12mm / H2O static pressure, ideal to double as both case fans and liquid-cooled radiators. In their typical operation, in addition, they only emit 25 dBA noise, so they are extremely quiet.

Read:  Here's how the new Ryzen APUs will boost your gaming performance

A box to accommodate your high-end gaming PC

The 309 Gaming Edition provides space to install up to 9 fans in total (although remember that it already comes with 4 pre-installed from the factory) and a versatile housing for liquid cooling systems, since it supports up to two 360mm radiators (front and ceiling). Unique top chamber design houses the power supply and up to three fans for effective airflow and heat output.

Other design features include a side panel of tempered glass removable without tools, a GPU holder and dust filters that can be easily removed for cleaning. As you can see in the image above, the box supports CPU coolers up to 160mm high, graphics cards up to 350mm long, power supplies up to 200mm long, and a total of four storage units, two of which are 3.5 ″ and two 2.5 ″. Supports, by the way, motherboards of format up to E-ATX.

Front I / O sits along the side edge of the front panel for easy access, and includes one USB 3.1 Gen.2 Type-C port, two USB 3.1 Gen.1 Type-A ports, headphone jack and microphone and the power, reset and LED control buttons.

At the moment the manufacturer has announced the availability of this new box, but has not said when we will see it in stores or at what price; However, if we stick to the precedents of the previous version, we can expect a price that is easily around the 300 euros.

How it works, price, apps, how to download and more

How to delete hidden or lost files on Google Drive

Free Fire will celebrate Day of the Dead with a very Mexican strategy!

What Fire TV 4K do I buy? The best Amazon models