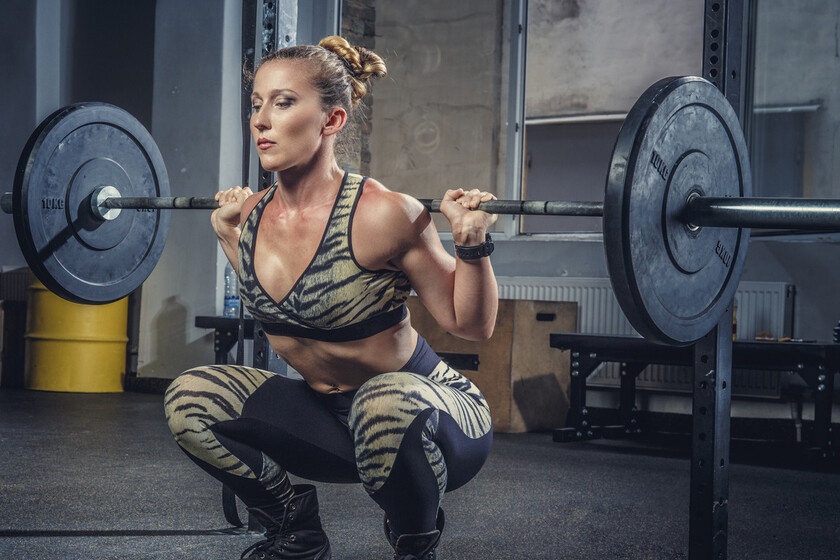 The squat is one of the best exercises for building muscle mass, strength and power in all leg muscles. In fact, squats is one of the exercises that is used to assess strength in powerliftersalong with the deadlift and the bench press.

In addition, it is not only capable of stimulating the legs, but our entire body, including the back, since if the person who wants to perform a good squat does not have a strong back and core, they will not be able to do it.

When we go to a gym, it’s hard to see a deep squat, although this does not mean that it is wrong, since each degree of depth can have certain benefits for each person. For example, for a runner, a soccer player, a basketball player, etc., who require a lot of power, doing a 1/4 squat is enough since that’s the range of motion they need for their sport.

On the other hand, a little more than half a squat is perfect for powerlifters since the judges correctly assess not a deep squat, but rather that the athletes are able to break parallel. Despite this, many athletes still use a deep squat.

Benefits of the deep squat

When we talk about muscle activation, it is always preferable to perform the full range of motion since we will be stimulating all the muscle fibers. In fact, according to this systematic review with meta-analysis, full-range-of-motion strength training is more effective than partial ROM for maximizing muscle strength and gains in muscle mass.

We have to take into account two factors (although there are several) when performing a squat if we want to gain volume in the buttocks, which are how much we flex and extend the knees and hips.

The gluteus is a very powerful and its main function is extend the hip and as secondary functions it has that of external rotation Y pelvic stabilizer.

When we perform a squat it is impossible not to flex both joints, but it depends on us how much we flex each of them.

There are several types of squats that, depending on where we place the bar, There will be more or less knee and hip flexion.

When we do a front squat, we have to place the bar in front of our neck while keeping our elbows raised so that we don’t drop it. At the time of going down, our ability to flex the hip decreases a lot because if we did, the bar would fall, so the front squat It is not a good squat to gain volume and strength in the glutes.

Read:  5 shower shelves that will help you keep it nice and tidy (and no drilling required)

The high bar squat is the most common to see in gyms. To do it correctly, we have to place the bar on the trapezius being careful not to hurt our vertebrae. When we go down to make it deep, we flex the hip somewhat, but not enough for there to be a great stimulus.

The low bar squat is another of the most used variants, especially in powerlifting due to the ability of athletes to lift more weight. When we perform the low bar squat, we must flex the hips so that the bar does not fall backwards. Also, the deeper you go into the low bar squat, greater will have to be our hip flexion since we have the risk of hurting our wrists. Therefore, the deeper the squat, the more hip extension work we will have to perform and, therefore, Greater stimulation and activation in the glutes.

The hip hinge is a gesture that is made with the hip for those people who are very dominant in the hip and have a lot of strength in the hip extensors.

When we perform a deep squat, it is normal to accompany the entire movement with knee and hip extension, but by making the hip hinge gesture, most of the concentric force will have to be done with the hip extensors and, therefore, we would involve the gluteus much more.

When doing the hip hinge, it is important that the athlete already has enough experience training since, despite the fact that it is a very good gesture to stimulate the gluteus, can be quite dangerous due to an increased risk of injury.

In Vitónica | 12 Yoga poses to reduce and relieve period pain

In Vitónica | 11 fruit ice creams, healthy and without added sugar, to make at home and cool off in the heat wave