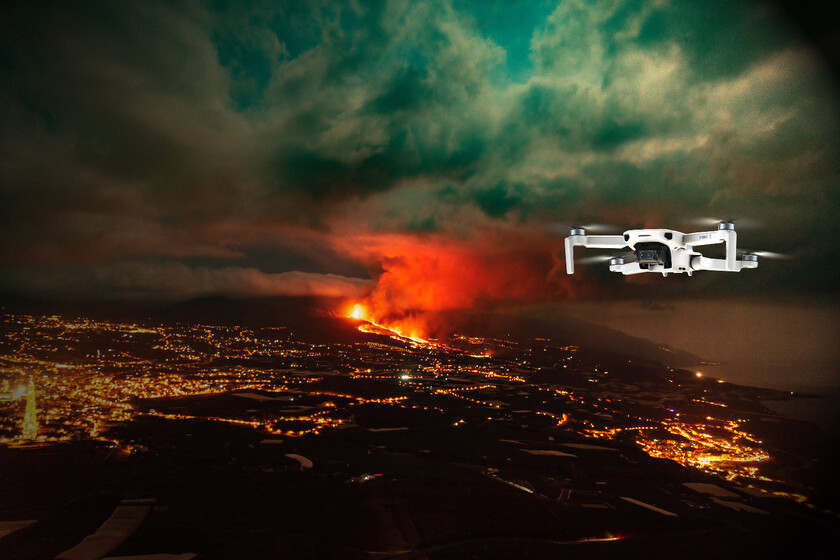 A few months ago we saw a drone go deep into an Icelandic volcano and get melted by lava; butCan you imagine that the artifact would survive the experience and return? This is what happened to a photographer who was on La Palma filming the Cumbre Vieja volcano with a small drone.

It all happened on December 1, 2021, two weeks before the volcano that has brought the palm trees headlong stopped its activity. The Youtuber Sunsets Sweden decided to “sacrifice” their little DJI Mini 2, which they nicknamed “Little falcon“, since the day before it had suffered significant damage when approaching the lava. That is why thought he could get unpublished images of the volcano if he smashed it into the lavaso he flew it very close until he lost signal.

And so it remained after contact with the lava.

The operator thought the drone had been melted by the lava; However, he miraculously discovered that the device reconnected to his smartphone and automatically started the way back after having suffered a (logical) overheating. The “Little Hawk” ended up with a good part of his body melted but still works, and even its owner was able to access his memory card without problem and recover the entire sequence that you have seen in the video.

A general view of the flight of the “little falcon” in which it ended up colliding with the lava.

Now him Youtuber has decided send it to fix and ask for collaboration for it; If you want to collaborate, you can go to his channel and, incidentally, see many other videos of the small drone (as well as others made by Sunsets Sweden on La Palma).

In this crack the drone ended up contacting the burning lava.

Cover photo | Montage of an image of the DJI Mini 2 over a photo of Eduardo Robaina shared on Wikipedia with a CC BY-SA 3.0 license

The Green Coast t-shirts that, for only seven euros, make us enjoy the last days of summer in pure tie-dye attitude