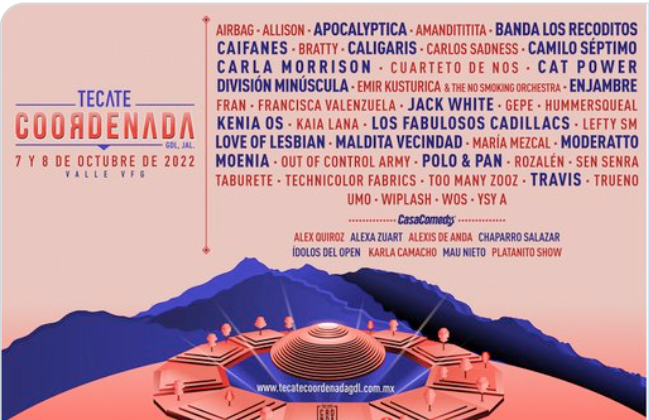 A few days ago the list of bands that will participate in the 2022 edition of the Coordenada Festival was announcedwhich will take place in Guadalajara.

After a long period of drought of massive events, this 2022, the reactivation of concerts does not stop and, apparently, it will not, even when the country is experiencing a new wave of Covid-19 infections.

The immediate future will bring us, from the outset, massive festivals such as the Corona Capital, in Mexico City, the Coordenada Festival, in Guadalajara, among others.

Since some years, In addition to Mexico City, cities like Monterrey or Guadalajara began to position themselves as the great stages for all kinds of events, among which the concerts of important international groups stand out.

In that sense, the Coordenada Festival, in the so-called “Perla Tapatía”, started in 2014 in Trasloma Parkin the capital of Jalisco, kicking off one of the most important music festivals in the country.

From 2014 to 2019, the festival was developed uninterruptedly and, each year, offering new experiences to music lovers; However, in 2020 and 2021, due to the pandemic caused by Covid-19, the music stopped and, with it, all the concerts and festivals around the world.

2022, as we mentioned above, began with a couple of truly massive concerts and even with quite relaxed prevention measures, showing signs that the end of the pandemic was drawing near.

They reveal how much one of the Coordenada Festival bands charges

Today, in the middle of the year and with a new wave of infections, it seems that the concert industry will not stop, to the point that fans are already getting ready for the Coordenada and Corona Capital Festivals.

And it is that, live music has become one of the greatest desires in a country that is used to large international eventsa fact that has been verified with the recent concerts that, only in Mexico City, have been carried out.

On June 7, it was announced the list of bands that will be part of the Festival Coordenada 2022a poster that looks for all tastes and that generated all kinds of criticism on social networks.

Within the wide range of talents that will be presented at Parque Trasloma, one of the names that caught our attention was Banda Los Recoditos, originally from Mazatlán, Sinaloa.

Now, on TikTok, Tomassini Lizárraga, a band musician, revealed how much Banda Los Recoditos charges per event, something that he recurrently reports in his content.

According to what the also tiktoker mentions, Los Recoditos, which will be presented at the Coordenada Festival, charge between one million and one million 400 thousand pesos per event.

On previous occasions, Tomassini Lizárraga He had already revealed how much groups such as Banda MS, Banda El Recodo and even Los Angeles Azules charge per show. and Los Tigres del Norte for an event.