“They didn’t give a dime for us” 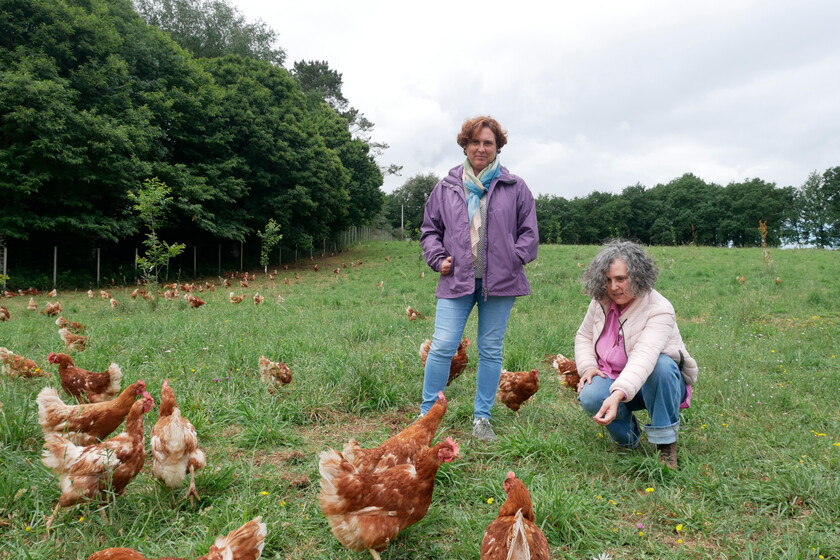 Today in all supermarkets it is possible to find eggs of free range chickens. But, in the 90s of the last century, the only way to get a real egg, laid by hens that had come out of the chicken coop at some point in their lives, was almost an impossible mission.

It is not that eggs were not produced hens with access to pasture, but these could only be found in the villages. With luck, if a family that had chickens had any left over, and after distributing them among the neighbors, they reached the markets of the capitals at stratospheric prices.

“In the 1970s, all production was transferred to a cage,” he explains. Nuria Varela-Portasmanaging director of Pazo de Vilane, the Galician company that was pioneer in the commercialization of free-range eggs in Spain. “In 1996 we launched a product with traditional methods and high quality, but with a modern approach to marketing”.

They did it from scratch and without much idea of ​​​​aviculture. The important thing for the family, explains Varela-Portas, was to find a business that would allow save the family manor from ruin, built in the 18th century: “The previous generation had emigrated. To Lugo, Coruña, Vigo… We to Madrid. [El pazo] he had a cow farm, but between 75 and 96 he was left without a farm. It was a very expensive summer house to maintain. In 1996, my father, with the desire to save the property and avoid ruin, returned from Madrid with the idea of ​​setting up something and keeping the manor”.

The company started with 50 hens, after the Varela-Portas saw a clear business opportunity that lay in treating chickens as before: “We came to meet a consumer need, which demanded alternative products to the industrial one. Here the village egg has always been in demand, and it was sold expensive. Perhaps because of this proximity to the rural environment we were able to identify that appreciation that the ladies of A Coruña had for this. The question was whether Madrid was going to have an inclination as well. What if. The first place where we sold was at El Corte Inglés in Pozuelo. And he was flying.”

The sale of eggs has kept the family manor in good condition, one of the most representative in the Ulloa region, in the geographical center of Galicia.

Last year, Pazo de Vilane invoiced 8 million euros and its eggs – which are produced by 200,000 hens with the help of 49 employees – are found in several of the largest supermarket chains in Spain. But when Nuria –who had grown up in Madrid and had just spent a period in London– she moved with her parents to her family manor, in the municipality of Antas de Ulla (Lugo)his plans sounded the most pilgrim.

The cardboard box for the eggs, a design by the artist Pepe Barro, has become the market standard

“The town saw me arrive at the age of 25 with zero chickens and has witnessed how it is built an entrepreneurial project, Explain. “At first they didn’t give a penny for us and less for me. A 25-year-old urbanite, a woman, who comes to the countryside to set up a business? Does she forgive her?”

Today Nuria -along with her partner, Juan Pedro Sanchez “Juanpi”, head of production, manages seven warehouses and supervises the production of another six, which operate with an integrated production system -they belong to other owners, but work exclusively for Pazo de Vilane, following their parameters-. His sister and partner Pietydirector of marketing and communication, directs the commercial office that the company has in Madrid.

There is no doubt that behind the success of Pazo de Vilane there is great commercial work, in which the iconic cardboard box in which their eggs are sold, a design by the artist Pepe Mud that has not ceased to be imitated and has almost become a standard in the free-range egg market. But none of this would have been achieved if the eggs weren’t good. And producing so many good eggs has not been an easy task.

Eggs from all the farms are received in the company’s central warehouse, selected and packaged in the well-known cardboard box that has become the company’s most visible sign.

The advantages of free-range chickens

To receive the free-range hen certification, number 1 in the European code that is printed on the eggs, you must have 4 m2 per hen in the park and, in the chicken coop, one meter for every six hens.

Read:  The SEC will create a mandatory registration for bitcoin exchanges in the US.

In Pazo de Vilane the chickens, in addition to eating their daily ration of cereals, go out to the meadow every day and They bite grass, insects or worms. What they catch “This adds color and consistency to the egg,” explains Nuria. “Now the industry is converting to land, cage eggs are disappearing, but this does not mean that [las gallinas] be in the field.”

We visit one of the Pazo de Vilane warehouses together with Nuria and Piedad, who pose delighted with their hens. They surround us immediately and They start to peck at our shoes.

When the hens have a very red comb, explains Nuria, it is because they have good vascularization, they are lush and, moreover, they are more productive.

“They go to look for the cords because they think they are worms,” ​​Juanpi explains later. “If you go to a chicken coop and they are not used to the farmer they do not approach. In two minutes you have to have 10 chickens within a meter. That means they are well socialized.

Although Juanpi joined the project in 2012, when it had already been running for 16 years, everyone who knows the company agrees that his arrival has a lot to do with the success that Pazo de Vilane has achieved in recent times. His is the merit of making so many hens live together freely without conflict. And he has achieved it by applying to poultry management techniques from his original profession: social education.

“I do with the chickens what I do in a rough neighborhood,” says Juanpi. “You arrive at a place where there is a group of conflicting animals and you do what is known in social education as the transect: walk around and see what happens”.

Juan Pedro Sánchez “Juanpi” is the production manager at Pazo de Vilane, but his training is as a social educator.

The man who whispered to the chickens

The production manager at Pazo de Vilane spent a good part of his first years of work crouched down to see what the hens saw. “Humans look at all the species of this above, but if you get up to her level you understand what she is seeing”, Explain. “The first four years I was crouching all the time. When someone new comes I ask them to get down.”

“You have to talk to the hens because the first thing it identifies is the human voice,” says Juanpi

Thus, little by little, he began to understand how to better manage the chickens. “I have studied a lot of animal etiology,” explains Juanpi. “And also I have seen many live recordings of the farms. You put a 50 euro camera in a corner and check. The behavior of the animal is very different when the human is or when he is not.”

One of the main tasks of Juanpi and his team lies in break the hierarchy that is usually formed in chicken coops, which causes the strongest hens to eat and drink to the detriment of the smaller ones (something not very interesting in terms of productivity): “What you do is disturb. We don’t hit them or insult them. We speak them and whistle them. You have to talk to the chickens because the first thing he identifies is the human voice. And you have to always go with the same color of clothes. It’s very important. There are colors that reject”.

All this effort in reducing the chickens prevents episodes of suffocation, stress and itching -which are the order of the day in the most industrial poultry farms-, which improves the well-being of the hens, but also their production, which at the moment is very high for a free-range farm.

The goal, they explain, is to reach a production of 4 million dozen eggs this year. It seems like a lot, but Nuria insists that it’s not that much: “Compared to cage producers we are very small. They can have 3 or 4 million chickens. Ours are 200,000. We are artisans and, although we are becoming more automated, it is a very careful and detailed production”. After visiting the facilities, we attest to this.

In DAP | The Italian company that is revolutionizing egg production by returning chickens to the forest
In DAP | 101 egg recipes, easy, cheap and delicious