They criticize tiktoker for risking his life in exchange for likes 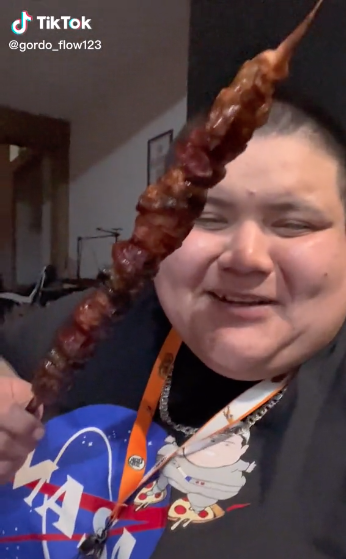 TikTok is one of the most used platforms by the country’s young population, which is used to share content on various topics. On the platform is the tiktoker @ gordo_flow123, who is known for sharing videos where he shows the food he tastes or makes jokes about his weight and his videos reach many likes among users and followers.

This tiktoker has one of the most followers on the platform, this is perhaps due to his way of being that generates empathy with people, or because of the interest caused by the new dish he ate today.

The internet has become a fundamental tool for people’s daily lives, during 2021, just over 88 million Mexicans used it, of which, 89.8 percent used it to enter their social networksaccording to a survey by the National Institute of Statistics and Geography (INEGI).

The use of social networks is of the utmost importance today, since many of them have had relevance in the population due to the information that can be shared in them. Among all those that exist, it is known that Facebook still leads the market with its almost 3 billion users; However, TikTok is getting closer to its reign, since, at least in Mexico, 50 million users over the age of 18 use the application.

Five years have passed since ByteDance created TikTok, a platform that was attractive to users for the ability to create and share short videos. In mid-2021, it reached one billion users per month and became the favorite social network of young people. A study of Sensor Tower revealed that as of the second quarter of the year, the app has been downloaded a total of 35 billion times.

And it is known that TikTok has been used to create content that adapts to the taste of all users; however, although many times this can be dangerous or sensitive for users, the creators do it to attract likes.

Tiktoker who risks his life in exchange for likes

the tiktoker @gordo_flow123 started sharing content from 2020, but it was until the following year that he concentrated on uploading contents foodie, then it went viral for a video showing off an oversized burrito, reaching just over 2 million views. Currently the influencer He has more than 4 million followers and his videos reach more than 60 million ‘likes’.

East influencer He has focused on sharing content where he shares with his followers his experience trying various dishes and has a plus-size clothing brand, which is located in Monterrey.

It is important to mention that care must be taken of what is spread on networks, with respect to this tiktoker who suffers from obesity has been criticized for the content he shares, where he promotes this lifestyle.

The comments he receives are very varied, there are those who laugh and celebrate the food that they are about to try and others allude to their weight and the consequences that this could have:

‘not even for a heart attack’, user @Cluver Galicia87

‘Someday I want an acquaintance who likes food as a hobby hahaha’, user @AntonioH-3828

‘The video that Óscar enjoys the most because of the way he says it😁😂😅’, user @DANCE SPIRIT😎

According to official figures, in Mexico, at least 70 percent of the population is overweight and nearly a third is obese, this disease is associated with diabetes and cardiovascular diseases. While poor eating habits and lack of exercise cause 32 percent of deaths in women and 20 percent in men.

Promoting this lifestyle on a social network can be detrimental to the consumer who follows this type of account and, in turn, to the person who does.

However, it is not the first time that a influencer She gains popularity for sharing videos about food and alluding to her weight. The Israeli tiktoker Idan Ohayon, who died at the age of 28 due to a medical condition, was characterized by sharing videos where he was seen eating and making fun of his weight problems.

This was his last video shared on TikTok, which reached 1.8 million views and 49,600 likes.

It is important to take into account the content that is disseminated on social networks, considering that it can reach various users and if one’s own health is put at risk, since it can have irreversible consequences for the user. influencer and it is detrimental to the followers.

Does the ‘gordimuerta’ exist?, they revive a seasonal snack on TikTok

Tiktoker without limbs becomes famous for his makeup tutorials

What are job interviews like in the US? Tiktoker latina shares details