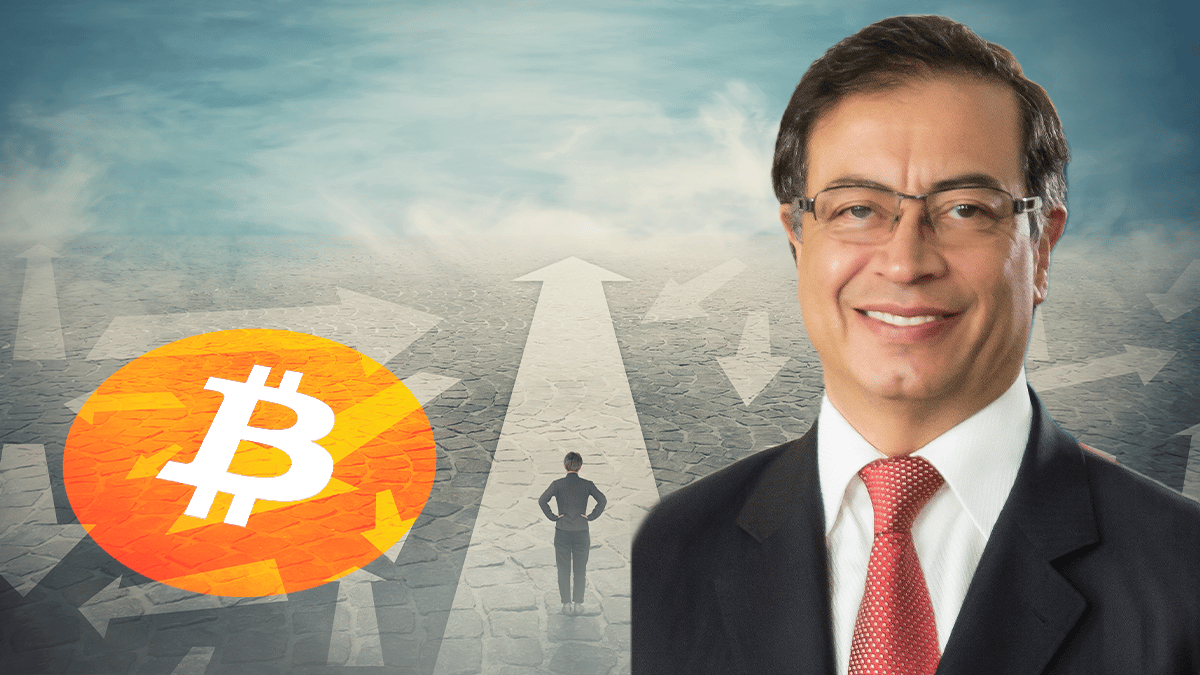 Gustavo Petro, the elected president of Colombia, has not recently spoken about bitcoin (BTC) or the cryptocurrency ecosystem, therefore it is unknown what his position will be against this ecosystem.

However, Colombian bitcoiners and the community in general are speculating on Twitter about what lies ahead for the industry in one of the three countries with the highest adoption of crypto assets in Latin America.

Petro will begin to govern Colombia from next August and so far there are only references to the past in deducing a clear focus of his ideas about the cryptocurrency ecosystem.

However, some of the assessments of the new president of Colombia on bitcoin tend to be contradictory, as the community is highlighting on Twitter.

Although on the one hand has been friendly with the pioneer of cryptocurrencies, to the point of celebrating “that it takes power away from the banks”; on the other he has also praised money printing, which confuses the community.

A tweet from Gustavo Petro published In 2017, he points out that “bitcoin removes the power of issuance from the States and the seigniorage of the currency from the banks. It is a community currency that is based on the trust of those who transact with it, trust is measured and grows, hence its strength”.

The message outstanding by the Twitter account of Bitcoin Magazine, has hundreds of comments from users, many of them Colombians, who, in some cases, they believe that Petro does support bitcoin and will show it after his takeover in August.

Others they say be on the lookout for what the new president will do with bitcoin, while there are those who doubt that Petro, although it represents the first leftist government to reach the presidency of Colombia, does something radical with bitcoin.

even many doubt that Petro comes to attract the attention of the International Monetary Fund or make radical decisions like Bukele did last year, declaring bitcoin legal currency in El Salvador.

Bitcoin vs money printing What does Petro say?

A Twitter user highlights another message Petro posted last year. In it, he declared himself in favor of printing money or issuing money.

Is about a policy that nowhere fits with bitcoin, whose economic system is based precisely on scarcity or limited existence (no more than 21 million will exist)

At that time, the current president-elect said: «Paul Krugman, one of the best economists in the world shows us how the emission of money for trillions of dollars in the US has not brought inflation. In times of recession, broadcasting can temporarily support an economy, especially if it is aimed at families».

Krugman says he is convinced that “money printing does not always cause inflation. It is as if government debt is the same as household debt; too plausible to test against the facts.

However, what Krugman mentioned contrasts with what happened in Venezuela, Argentina and other countries where an excessive monetary issue produced a high inflation which in turn devalues ​​their national currencies.

In response, the populations of Argentina and Venezuela have adopted bitcoin as an alternative to escape decisions made by these governments, as shown in a study by the economist Ángel García Banchs.

What will Petro do with bitcoin? the question everyone asks

CryptoNews awaits responses from Gustavo Petro’s press team, who were asked for comments to learn about the plans that the president-elect may have regarding bitcoin and the position that his government will have regarding the cryptocurrency ecosystem.

Meanwhile, the community continues to debate on Twitter what will the new president of Colombia do about the cryptocurrency industry? It’s what everyone is wondering.

The expectation of many is that the Petro government has an innovative perspective, typical of the presidents of the 21st century.

By this, they may be referring to Nayib Bukele from El Salvador or Faustin-Archange Touadéra from the Central African Republic. Both, nations where bitcoin is now legal tender.

In any case, not everyone agrees with a government declaring cryptocurrency as legal currency in its country if that means using a centralized wallet, like El Salvador’s Chivo app.

Still, for Colombian bitcoiner Juan Rodríguez, there is no doubt that the Petro will focus on money printingbut also there are who stands out the value of bitcoin that allows you to make your own decisions no matter what a president does or does not do about cryptocurrencies.