These bags of Lay’s chips cost 1,900 euros, but they have a trick 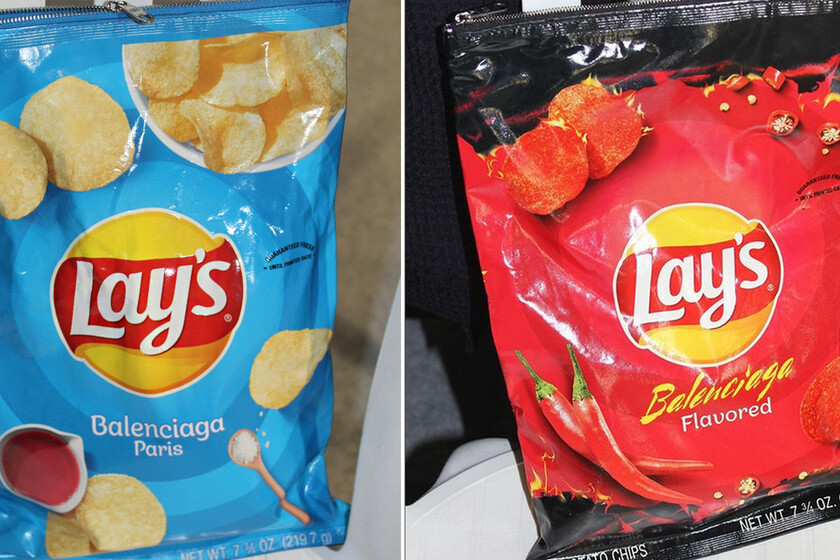 The situation of global economic crisis that we are currently experiencing can make us forget that there is still room for excesses of rich. And we are no longer talking about what one is willing to pay for the new Dabiz Muñoz menu or for bringing barnacles to the table next Christmas, but about eccentricities such as steaks and sandwiches covered in gold. Or, as in this case, a bag of Lay’s chips almost two thousand euros.

The Guinness record for the most expensive French fries in the world is held by the Serendipity 3 restaurant in New York, which has made its great claim of past luxury, but the world of fast food can go further than sneaking into a menu of high kitchen. It is no longer the food itself that has value, but design and brand turned into an icon. An icon of fashion, how could it be less.

It was last summer when Demna Gvasaliacurrent creative director of the firm Balenciaga, went viral in the fashion world by appearing at an event in Antwerp with a bag of Lay’s crisps as a handbag. There were few explanations about it then, although it was not surprising considering the peculiar style of the designer, who completely renounces following any canon, converting the most mundane in object of desire of those who can afford their prices.

After presenting his latest spring/summer 2023 collection, it has been confirmed that Demna has signed a special collaboration with Lay’s brand to launch a limited series of handbags bag, without handles or straps, replicating four varieties of the famous French fries. Life-size, imitating the wrinkled texture of the same and with a zipper closure, but yes, made of leather. And at the modest price of almost two thousand euros.

Read:  How much does the Porsche that Luka Doncic drives cost?

Specifically, the exclusive bags reproduce, in great detail, the flavors of potatoes chip classic, spicy, salt and vinegar and onion and sour cream, thus playing with the four recognizable colors (yellow, red, blue and green, respectively). Each with the name of Balenciaga on the front, so there are no doubts about its authorship and exclusivity.

Although they have not yet been put on sale, it is estimated that a series will come out. limited from this collection to make them even more exclusive and collector’s items of desire, at a few €1,900. We would say that it does not seem difficult to make a homemade version by reusing a regular, very clean bag of chips, although we intuit that the only interest in using such a fashion accessory -quite uncomfortable, on the other hand- is precisely to show off the name of the firm.

Photos | Balenciaga
In DAP | We tried the new Lay’s Horno: some (not) fried potatoes that are promoted with half the fat
In DAP | What are potato chips, who invented them and how can you make them at home?

As of December 1, the prices of 40 Coca-Cola Femsa products will rise; this will cost the ‘coquita’