These are the covers of the international media 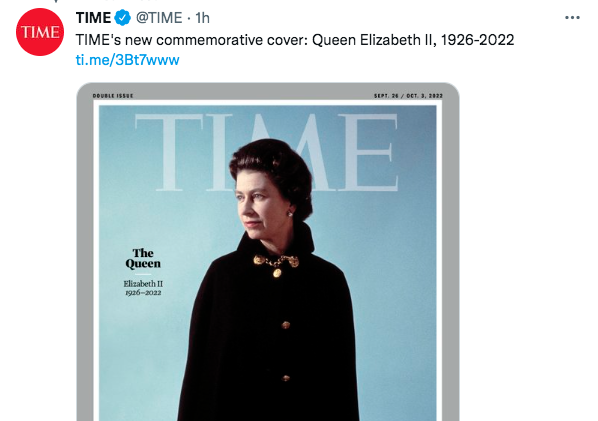 Undoubtedly, the death of Queen Elizabeth II has become the main coverage of the national and international media, being one of the most relevant news in history.

Through its official site, the Royal House released the news of the death of Queen Elizabeth II at the age of 96, after hours before the monarch’s delicate state of health was discussed.

We live in an era in which social networks are the first to confirm this type of event, displacing, once again, traditional media such as television and radio.

Let us not forget, in this context, that Currently there are about five billion Internet users around the world, in addition to the fact that the browsing time of users is very close to seven hours a daywhich is why brands and the media now have a strong presence on the digital stage.

At the time, to mention an example, the news of the death of the singer Vicente Fernández was made known, first, through the official social networks of the Mexican interpreter.

Now, given the importance of a personality like Queen Elizabeth II, the digital media once again proves its relevance in an era of hyper connectivity by announcing the death of the monarch, a day that has been classified as “D-Day”.

This is how international media reported the death of Elizabeth II

There is practically no media that does not report what happened today, from national to international, because the news transcends borders and, in one way or another, will have an impact throughout the world.

Queen Elizabeth II waved at crowds from the balcony of Buckingham Palace after her coronation in 1953.

Born in 1926, she took her first steps in a world we recognize only from sepia photographs. Here’s a look back at her extraordinary life of her. https://t.co/xJO2CDKGSg pic.twitter.com/wjNSJoC6Kf

In this special edition of CNN’s 5 Things podcast, we take a look at the life of Queen Elizabeth II, Britain’s longest reigning monarch who passed away at the age of 96. Listen here. https://t.co/oVErW2QXz0 pic.twitter.com/yOwqsFiUnf

Breaking: Queen Elizabeth II, the longest-reigning monarch in British history, has died. She was 96. https://t.co/KwcqW6QLaE

Her Majesty died at the age of 96 at Balmoral, her Scottish beloved estate, Buckingham Palace has confirmed. https://t.co/ZNhYj08KMa pic.twitter.com/8nx1zgbXBv

There is no doubt that, today, the digital conversation sets the tone for brands and the media to follow; it seems that television and radio are losing more ground, even with the arrival of streaming.

Read:  'Drive my car' gives Japan its second award for best international film of the year

According to a study of wavemakermore and more consumers prefer the possibilities offered by platforms of streaming compared to traditional television.

In that sense, Young people are the ones who spend more time watching content from social media platforms. streaming. Specifically, 58 percent of young people between the ages of 18 and 24 worldwide watch television via streaming compared to 42 percent who consume traditional television; however, if we talk about people over 55 years of age, 33 percent choose the streaming and 67 percent television.

On the other hand, Mexico is one of the countries that consumes the most open television content. A recent report from Federal Institute of Communications (IFT) mentions that, of 100 percent of those surveyed, 75 percent still consume open television channels.

According to what was said in the study, the contents most watched by Mexicans are newscasts, soap operas and movies.

Starting today, Operation London Bridge begins, a 10-day space that will serve to bid farewell to Elizabeth II and, in addition, for the succession of King Carlos, who has already been appointed.