these are the characteristics and prices of the new Surface

By WilliamsonSeptember 22, 2021No Comments6 Mins Read 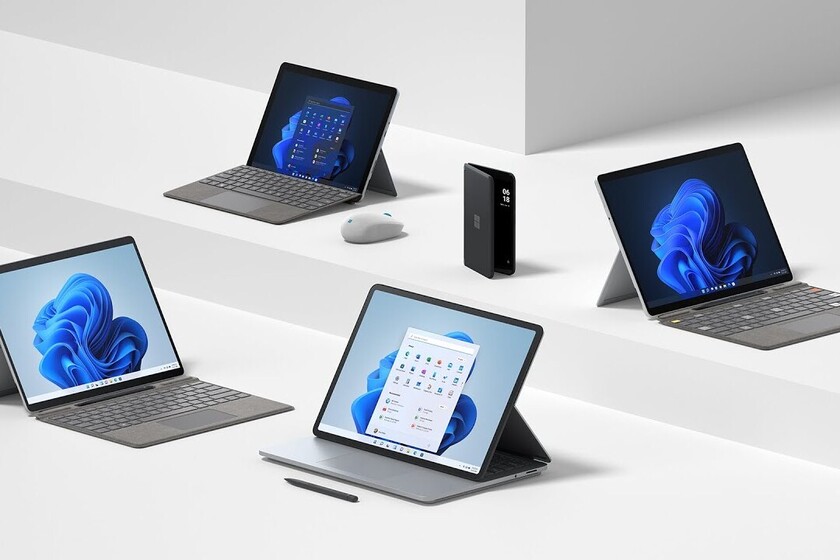 Today was the day marked on the calendar by Microsoft to introduce new devices. We have been seeing and learning about rumors over the last few days, many of which have ended up being true. And although we already expected some of the presentations, with some of the models we have had an important surprise.

Microsoft has presented several devices in one fell swoop. A Surface Pro 8, Surface Go 3, Surface Duo 2, Surface Laptop Studio new… models that arrive to replace their predecessors in the market more or less quickly and of which now we are going to know all their characteristics.


The new Microsoft Surface Pro 8 it fulfills what we already expected. With smaller frames the team that now offers a eye-catching 13-inch display with PixelSense. Ideal for struggling with ever-larger tablets and even Bitten Apple brand laptops.

The news that now comes the support for 120 Hz on-screen and Dolby Atmos sound support. In addition, it adopts an adaptive color technology that improves what we see on the screen.

The new Surface Pro 8 arrives with the Surface Pen 2. It is another novelty, since the Pen is able to recreate the vibrations we feel when writing with a real pen. It does it with magnetic impulses

According to Microsoft, this model has 43% more power and 75% faster graphics. One model uses 11th generation Intel processors. These can be accompanied by up to 32GB of RAM.

It has Thunderbolt 4 with USB Type-C interface and leaves the proprietary port to charge a battery that offers up to 16 hours of autonomy.

It also comes with a keyboard Surface Pro Signature Keyboard for Surface Pro 8, which highlights a receptacle for the Surface Pen 2, to store it and to charge automatically.

This model starts at a price of $ 1099.99. For now we do not have data on its availability in other countries or its price in euros.

The Surface Go 3 is a device aimed at the younger audience. A Windows 11 device that maintains the aesthetics of the Surface Go 2 that we already know.

The difference comes with the new 11th generation Intel Core processors. According to Microsoft, this will make the Surface Go an even more powerful device, according to the brand 60% more than the previous device.

When it comes to connections, the Surface Go 3 offers USB Type-C ports, card reader and Bluetooth 5.0. For the front camera we have a 5 megapixel sensor with support for Windows Hello and for the rear an 8 MP sensor with auto-focus.

The Surface Go 3 runs Windows 11 Home and it is compatible with the new Surface Pen 2. A model that starts at a price of $ 399.99 which shows that it is aimed at the younger audience. For now we do not have data on its availability in other countries or its price in euros.

Read:  The most common scams during Black Friday and Cyber ​​Monday and how to prevent them

Of the Surface Duo 2 almost everything had been said. An Android-based model that comes with a top processor, the Snapdragon 888. It has a large 5.8-inch screen and still generous bezels.

The new model is compatible, given the processor it carries, with 5G and WiFi 6 networks. I could not miss the Bluetooth 5.1 and NFC connectivity.

The two screens remain independent, slightly curved on the sides to facilitate a continuous screen feel. The news is that it includes a third screen on the “spine” that is used to view notifications without having to open the screens.

Each screen is 5.8 inches in size so that when the two panels are unfolded they form a screen of 8.3 inches diagonal.

It is still a folding screen system that allows you to use a screen as a remote control for games, something that can be used with Xbox Game Pass, but without neglecting the use with “two-way” applications.

In the camera section the Surface Duo 2 integrates a triple camera module with a 12-megapixel main sensor, a 12-megapixel telephoto lens and a third 16-megapixel ultra-wide-angle sensor, with f / 1.7 and f / 2.4 aperture lenses, as well as optical image stabilization. A model that has a starting price of $ 1,499.99. For now we do not have data on its availability in other countries or its price in euros.

The Surface Laptop Studio is another of the models presented. Tremendous design with a double base and a screen that then can be tilted like a Surface Pro 8 and even horizontal. A model that has inside an 11th generation Intel Core processor with four cores and a graphic NVIDIA GeForce RTX 3050 Ti.

This design makes it possible to go from being a device with a high power to being a device that can be used as a tablet, either with the hands or with the stylus. According to Microsoft the design and the hinge used allows to adopt three positions: laptop, stage and studio.

It is a somewhat thick and perhaps heavy device, to facilitate cooling. A model that comes to succeed the Surface Book and that sports a a 14.4-inch PixelSense display supports up to 120Hz and Dolby Vision.

Microsoft wants to take care of the multimedia experience and to achieve an optimal result it has opted to include four speakers with Omnisonic technology and Dolby Atmos support. Regarding the front camera, it has Windows Hello support and thanks to an artificial intelligence algorithm that adjusts the exposure to the lighting conditions of the location where we are.

This model makes use of USB Type-C ports with Thunderbolt 4 interface, facilitating the connection of all kinds of devices. A device that starts at a price of $ 1,599.99. For now we do not have data on its availability in other countries or its price in euros.

Top Gun: Maverick nominated for the Oscars: we remember its expansion in Microsoft Flight Simulator