The Xunta thought that its campaign against sexist violence was effective. They have achieved the opposite 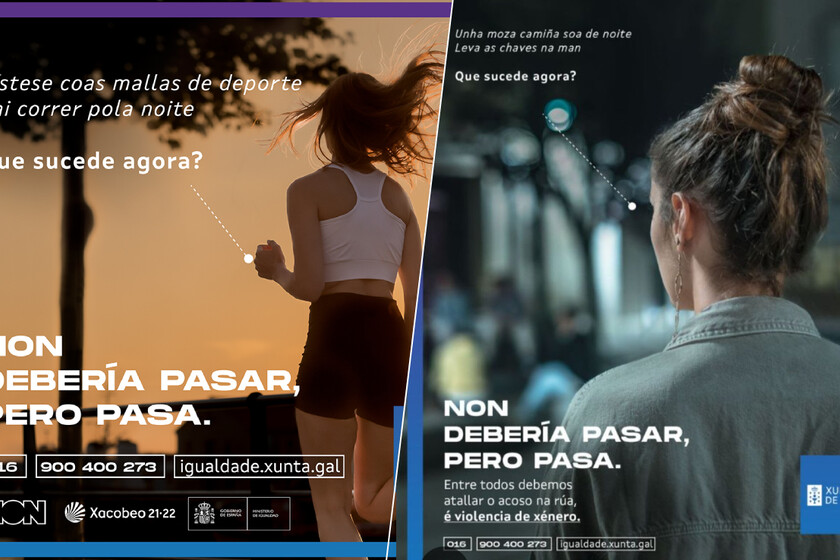 In the last few hours, a controversy has gained strength on social networks, which have raised the torches against the Xunta de Galicia amid a barrage of criticism from users and different personalities against the unfortunate approach of a feminist campaign. The commotion arises from the publication of several posters on the occasion of the International Day for the Elimination of Violence against Women which is held tomorrow, November 25, with the message: “He wears sports tights. He’s going to run at night, what happens now? It shouldn’t happen, but it does.”

The idea of ​​the Galician Executive was a slogan that focused on the harassment of women in the streets. However, the message seems to say that Harassment or aggression can be caused simply by wearing leggings, playing sports or going out at night, what blames the victim. In other words, it is interpreted that sexual assaults occur because of the clothing they decide to wear.

In addition, when referring to the fact of going out for a run at night, it also gives rise to the confusion that at that time the woman should not be alone in the street so that nothing bad happens to her. Again, it seems that she is to blame for doing all that.

🟣 Dress up some sports tights. I’m going to run at night. What happens now?

Many Twitter users have been launched against the autonomous government. Among them was the Secretary of State for Equality and against Gender Violence, Ángela Rodríguez ‘Pam’, who has taken advantage of to attack the PP. She explained that when talking about violence against women “There are no more responsible than the aggressors”calling the campaign “unacceptable”: Also among the critics are journalists such as Ana PastorSandra Sabatés, Andrea Ropero or Quique Peinado.

As pointed out by the association Xornalistas Galegas, which also advocates for the campaign to be withdrawn, the intention of the sexual campaign is to deceive the aggressor, it focuses on the victim, on the life they lead and how they dress. “Get over the idea that it would be better to stay at home. The tone is defeatist, it introduces the problem of sexist violence but it does not solve itnor does it give tools to society to know what to do or what is being done administratively (beyond having the number 016)”.

The tone is defeatist, it introduces the problem of sexist violence but it does not solve it, nor does it provide tools to society to know what to do or what is being done administratively (beyond having the number 016) pic.twitter.com/hnaD0iAXV4

As they point out, it must be taken into account that the campaign takes on a broader meaning in its full display (the campaign is accompanied by a video, a radio spot and other posters with different slogans but the message transmitted by the different parties separately is confused and remains centered on the victims.

The Xunta tried to focus on the harassment and attacks suffered by many women when they go out for a run. But it seems that the words to express that idea have not been the right ones. In addition, the Executive declares that these posters have been published and present in Galician cities for a couple of months “without receiving any criticism” from the General Secretariat of Equality. That is why they have already confirmed that they will not withdraw the campaignwhich according to point out, “ended a few days ago”.