the WSJ report on infidelity 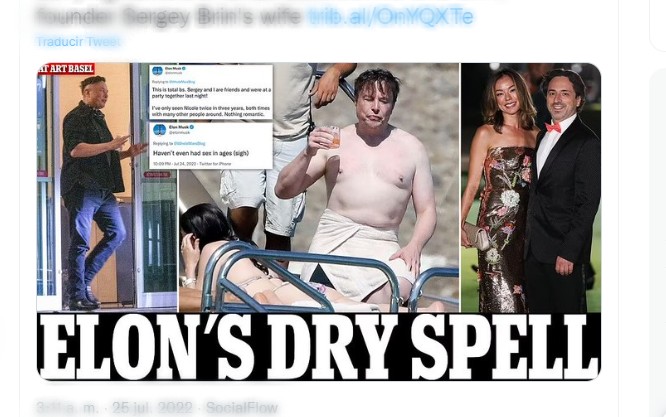 Billionaire Elon Musk has denied on Twitter allegations about his relationship with Nicole Shanahan and his friendship with Google co-founder Sergey Brin.

The tycoon referred to the subject this Monday on the social network, denying the content of the report The Wall Street Journal who says that he would have had an affair with Nicole Shanahan, Brin’s wife, and that this affair would have triggered the divorce of both.

On Twitter, a social network with which he has a legal dispute, he responded to a question in which he was asked to confirm or deny what the WSJ said.

Musk said: “Sergey and I are friends and we were at a party together last night.” In this way, she denied that the friendship between him and Brin had been broken. He added: “I have only seen Nicole a couple of times in the last three years, in all cases with many other people around. Nothing romantic.”

Responding to an account showing him relief at the denial, Musk wryly said, “I haven’t had sex in years (sigh).”

According to The Wall Street Journal, the affair between Musk and Shanahan ended the long friendship that the Tesla leader had with the co-founder of Google.

Read:  The report that shows that the electric car has a serious problem in Europe

“Elon Musk had a brief affair last fall with Sergey Brin’s wife, prompting the Google co-founder to file for divorce earlier this year and ending the tech billionaires’ longstanding friendship,” the report reads verbatim. of the WSJ.

Musk is the world’s richest person, with an estimated fortune of $240 billion, and Brin ranks eighth globally, with $95 billion, according to the Bloomberg Billionaires Index.

According to WSJ, Brin and Musk have been friends for years. That relationship led, for example, to Brin lending Musk $500,000 to get Tesla through the 2008 financial crisis.

Always according to the American media, in recent months there has been a strong tension between the two. Among other things, Brin ordered his financial advisers to sell his personal investments in Musk’s companies.

Brin, meanwhile, filed for divorce from Nicole Shanahan in January 2022 citing “irreconcilable differences,” according to records filed in Santa Clara County Superior Court and seen by the media.

The divorce request would have been made a few weeks after Brin found out about the affair.

Twitter’s revenue and profits fall for this reason