The World Cup matches in Qatar are being extremely long. We can expect the same in the future 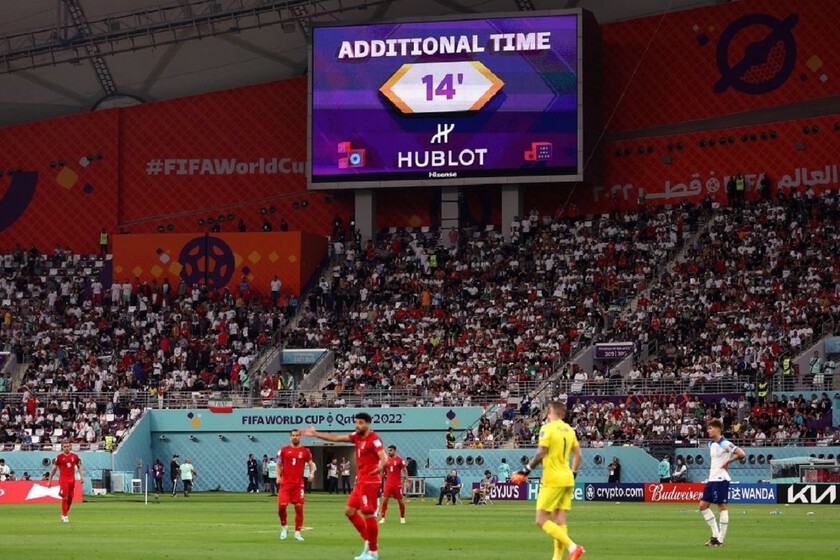 117 minutes and 16 seconds: it was the duration of the match between England and Iran at the World Cup in Qatar, as a result of the injury suffered by the Iranian player Alireza Beiranvand, becoming the longest group stage match in the history of the world. Mehdi Taremi’s penalty arrived at minute 102:30, the latest goal in a World Cup in history, excluding extra time. This was followed by Davy Klaassen’s for the Netherlands in the 98th minute and 17 seconds.

In soccer competitions, the referee usually adds three or four extra minutes on average. But what is happening in the World Cup in Qatar is different. In the games that we have played, the discount times attract attention. Only in the first five games played in the tournament was added the incredible figure of 85 extra minutes. To give you an idea: only in the England-Iran game, the referee added 15 minutes in the first half and then another 14 minutes in the second half.

This is causing quite a debate in the sports press with some celebrating FIFA’s attempts to put an end to the time wasting that has done so much damage to many teams. But, on the other hand, there are those who consider that this is giving rise to endless matches. The question that arises is: why has FIFA taken this new path?

The reasons why a match is stopped are very varied: injuries, referee decisions, VAR analysis, substitutions, penalties and red cards. But some players also tend to use the picaresque of deliberately delaying the resumption of the game as long as time continues to count and the end of the match is reached as soon as possible.

Eight goals were scored in the England-Iran match (6-2). Not only that, in minute 7 of the first half, the goalkeeper, Alireza Beiranvand, came out to clear a lateral cross from the English and collided with his teammate Majid Hosseini. The goalkeeper was left lying on the ground for several minutes and bleeding from his nose. They managed to stop the bleeding, but he ended up being replaced later. It’s just a sample that in games with similar characteristics you will be able to wait 100 minutes or more.

In fact, the committee of Pierluigi Collina, president of the FIFA Referees Committee, has conveyed to the referees of all the federations that FIFA’s intention is to that not a single dubious play escapes themso they must be prepared to be called to the VAR monitor more than they usually do.

There is a reason for these changes. FIFA wants to make sure every minute is played on the pitch and not lost to delay. “The World Cup is the most important tournament in the world,” Collina explained during a conference. “Imagine that two, three goals are scored at one time. So it’s easy to lose three, four, five minutes, just to celebrate a goal. This time must be considered and compensated at the end.”

This is leading to a point where all records are being broken. In the England-Iran 24 minutes added in total, crazy. By OptaJoe’s count, the five halves with the most stoppage time in World Cup matches since records began in 1966 took place on Monday and Tuesday: England v Iran, first half (13:59); Argentina – Saudi Arabia, second part (13:53); England – Iran, second half (13:05); United States – Wales, second half (10:32); Senegal v Netherlands, second half (10:03) This will continue to be the case throughout the tournament, and surely in the future of football that we will see in the coming decades.

Bill Gates on Artificial Intelligence ChatGPT: “OpenAI’s work is better than others”