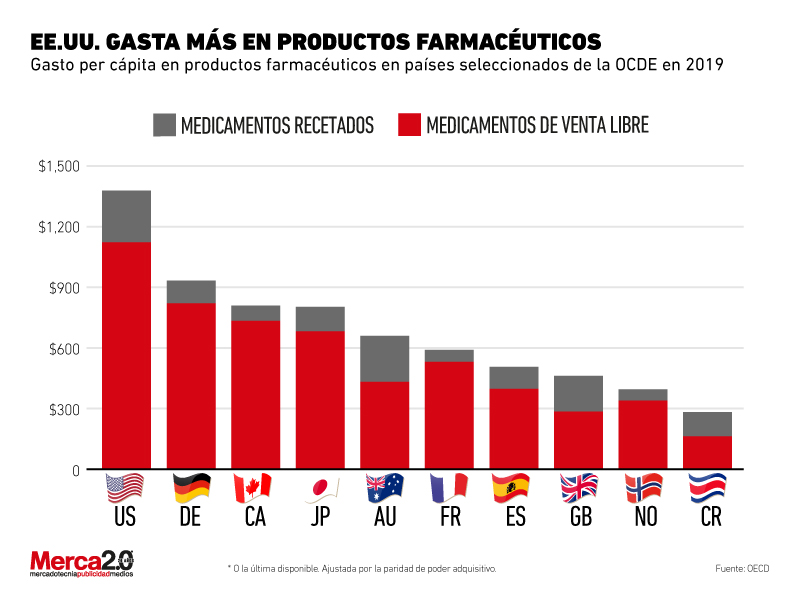 According to a recent report by the Organization for Economic Cooperation and Development (OECD), the United States is, today, the country that spends the most on pharmaceutical products, but what is happening in the global market?

Currently, one of the most competitive industries is the pharmaceutical industry, a fact that we can corroborate in one of the most recent studies of IQVIA, which reveals that, between 2001 and 2020, the income in the sector had a really important growth until reaching over a trillion dollars.

Of course, we are talking about a period of two years (after the arrival of Covid-19) in which the industry has had a great challenge, but also a strong presence on a global level, at least, this is what IQVIA reveals.

As shown in the graph above, Taking data from the OECD as a reference, the United States is the country that has spent the most on pharmaceutical productssince the average American accumulates costs of $1,376 in medicines, 47 percent more than Germany, which is the second country in allocating more expenses in this sector.

For their part, countries such as Canada and Japan are more level with each other, both spending about 40 percent higher than the average, with $811 and $803, respectively.

It should be noted that the OECD countries that spend the least on medicines are Mexico and Costa Rica, although it was below the average in many Eastern European and Scandinavian nations.

The industry outlook for Mexico in 2022

Recently, during the National Congress of Pharmacies, a group of leaders of the pharmaceutical industry in Mexico estimated, by 2022, the production of 5.7 billion drugs, that is, more than the 4.2 billion that were developed in Mexico. 2021.

Read:  Netzhome; 7 reasons to integrate a smart plug into the home

And it is that the pandemic caused a 60 percent increase in private consultations, which is why the demand for generics was even greater.

According to what Rafael Gual Cosío, general director of the National Chamber of the Pharmaceutical Industry (Canifarma), mentions, the demand for generics grew up to 28 percent, which was driven by antibiotics, antivirals and other supplies such as antibacterial gel (alcohol in gel) or face mask.