the traditional marzipan sweet typical of All Saints 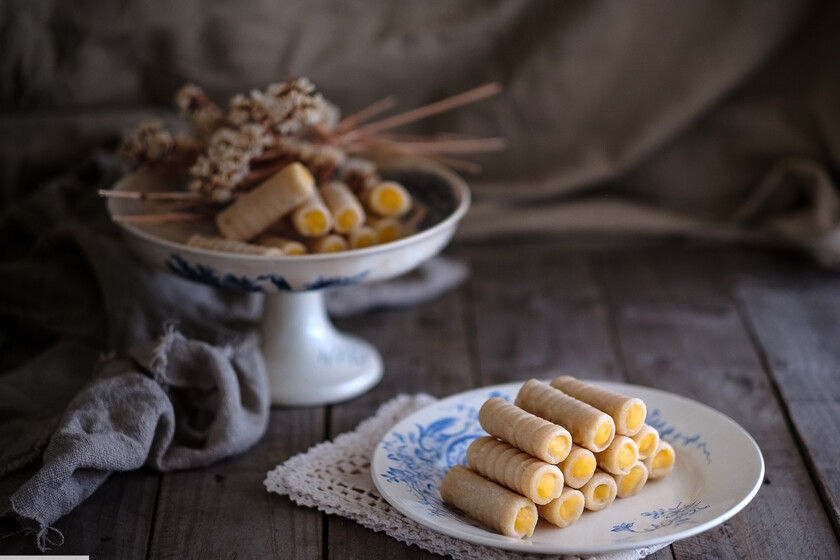 We will start by preparing the marzipan. For that, in a saucepan, add the sugar and water, put it over medium-high heat and bring it to a boil. Once it boils for a minute or so We remove it from the fire. In a bowl, add the ground almonds and gradually add a third of the prepared syrup, stirring at the same time with a wooden spoon. We continue incorporating the syrup in small quantities and observing that a paste of manageable consistency is made, since it depends on the ground almonds that we have.

We make a ball and let it rest and cool for about two hours. Once cool, sprinkle icing sugar on the table and roll out the marzipan until it is 2 to 3 millimeters thick. Then with a skewer we mark the typical lines of the bones and cut some rectangles about 5 centimeters wide by 6 centimeters high. To give them the shape, we roll them on the stick of a wooden spoon, and we place them upright on a baking tray. Let them dry in this way for at least four hours.

While we prepare the yolk cream. For that, in a microwave-safe glass bowl, add the yolks and beat them lightly. On the other hand, in a saucepan, make a syrup again with the water and sugar, over medium-high heat, once it reaches a boil we count three minutes or if we have a kitchen thermometer, it will be when it reaches 105 degrees Celsius. Remove and add the syrup to the egg yolk, stirring nonstop.

Put the bowl in the microwave and cook the yolk at maximum power for 30 seconds, stopping and stirring, until the yolk thickens. It will be about two minutes or two and a half minutes. We can also cook it in a bain-marie without stopping stirring and being careful not to cut it, this will take half an hour or so. Once the yolk is thick, let it cool for a while at room temperature covered with a film attached to the surface so that it does not crust, then we put it in the fridge for two hours so that it takes on body.

Once the bones are dry, we put the yolk in a pastry bag with a narrow nozzle and fill the bones with it. Once filled, we prepare with the icing sugar and the water, a bath icing and we put the bones in it, turning them over with two teaspoons and later leaving them to drain on a rack until they dry, which will be at least four or five hours depending on the humidity of the environment.