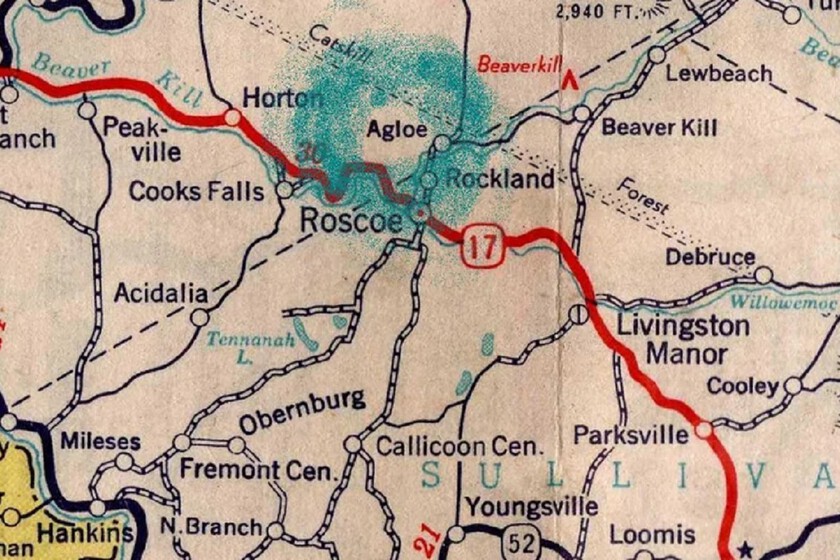 Someone can lose the mobile, the bag or the umbrella. But lose an entire city? The same thing happened in upstate New York, USA, in 2014. Google did something it almost never does: it wiped a city off its maps. But don’t blame them. The origin of the city was suspicious. And how that town, Agloe, a speck of a village in the western Catskills, ended up on maps 90 years ago remains a cartographic enigma. How he persevered is even more unheard of.

Let’s see what actually happened. The town was invented as a cartographic trick in the 1930s, but somehow it ended up becoming a reality. In those years, there was no town on that stretch between Rockland and nearby Beaverkill, just a dirt road.

So? Cartographers don’t usually invent entire towns with pencil and paper. But they do create more subtle traps: non-existent dead ends or false river bends or tight mountain rises. Such “trap streets” are rarely officially admitted by cartographers, but it is an ancient practice to keep copycats at bay.

Why? Companies that create maps are hacked all the time. You hire a cartoonist, you check the spelling, you work on the colors, you put all the cities in the right place, and a gas company appears, or a tourist agency that takes what you have done and puts its own name on it. You take them to court and the offenders tell you: “try it”. Because there is a real world, obviously the maps will be identical. And the pirates get away with it.

Unless the cartographer runs a little “scam”. If it turns out that a competitor has the same fake city on their map, then you’ve pretty much caught them red-handed.

That’s what Otto G. Lindberg of General Drafting Co. thought when he saw Agloe on competitor Rand McNally’s map. Agloe was the brainchild of Lindberg and his assistant, Ernest Alpers; his own name was a mixture of his initials (OGL and EA). Agloe did not exist.

Rand McNally sent cartographers to upstate New York, and there, where Agloe was marked on a map, there was a building called the Agloe General Store. This is how a fake city became real. That is, the same copyright trap took on a life of its own.


Agloe survived on Esso and Exxon road maps into the late 20th century and even long enough to evolve to a digital city on websites like Googlewhere it made its debut in 2013. It was even mentioned in a 1957 travelogue in The Times about “scenic drives”, which gushed about “an unmarked country road running north through Rockland and Agloe” .

In 2008 Agloe gained notoriety for being featured in John Green’s YA novel, paper townyes Why did they plant Agloe in upstate New York? According to Mr. Lindberg’s obituary, she went fishing one day in 1923 and got lost on the way home. “Cartographer by profession,” the article said, “decided to provide maps to prevent such situations.”

Argleton is a town in the North East of England. Well, actually, it’s more of an empty field in the North East of England. For a time, however, Argleton existed on Google Maps and websites listed hotels, businesses, and apartments for rent in the city. business was real, but they only existed in other nearby towns. In 2009, Google removed Argleton from its digital map.

Moat Lane is supposed to be a winding road in Finchley, north London, although Google’s satellite view only shows trees and gardens. Like Argleton, Moat Lane was probably carried over from the TeleAtlas directory, which formed the initial basis for Google Maps in Europe. Like Argleton, it has since been erased.

The map of Bristol contains a small cul-de-sac called Lye Close, jutting out from Canynge Square. It is not indexed in the list of streets on the map and is placed in a strange way. Sometimes it’s not so clear whether a missing street was deliberate or just a mistake. Kemp Ave in Toronto, for example, is an unmarked, unpaved lane behind some houses. It has been removed from Bing Maps, but still appears on Google.

In the digital age of Google and company

Many of these copyright traps have ended up being deleted by Google or some other guardian of the digital map. With multiple world maps at our fingertips, trap streets are no longer the secret they once were. Many reported trap streets and towns have quickly disappeared from the digital record when someone reported them.

But that doesn’t mean digital cartographers still don’t have tricks up their sleeves. OpenStreetMap, which is a wiki-style open source map editable by anyone, expressly warns contributors not to copy existing map files.

Digital map providers who do not want their raw (vector) map data copied can implement a class of Easter Eggs. The lower bits of the geographic coordinates are systematically modified so that they are not obvious to a user of the map, but can be used in proof of copyright to prove that the data has been copied.

When Apple Maps used OSM data on one occasion, the community immediately realized. They noted, for example, that Apple Maps had the exact same streets and buildings labeled in Pakistan and noted oddly poorly characterized winding trails.

A similar area of ​​Norwich on Apple Maps (top) and OpenStreetMap (bottom). The shape of the trails is the same, but they are miscategorized as roads on Apple Maps.

“The specific shape of roads, coastlines or rivers are other gifts. A map is like a huge fingerprintsaid Alex Barth, who works for Mapbox and is on the OpenStreetMap board of directors. Trap streets are easier to spot these days, but that doesn’t mean maps are easier to copy on the sly.

These fake streets were always something of a paradox, as they inherently contradicted a map’s purpose of accurately reflecting reality. Agloe and Argleton are there to remind us.