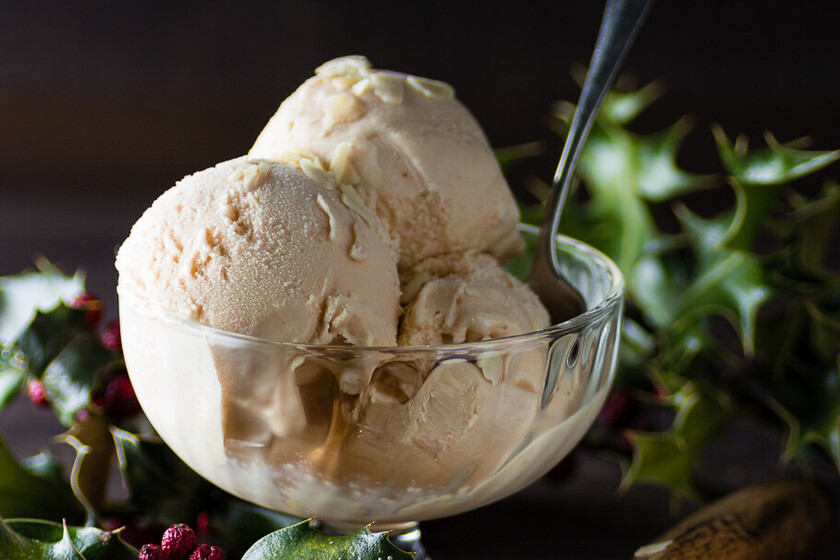 The secret for this nougat ice cream to be very creamy and with a slightly crystallized texture is invert sugar. You can buy it already prepared in pastry shops, although doing it at home is very simple by following this recipe to make it in a saucepan, or this one to make it with Thermomix if you have it. It is worth getting into the kitchen half an hour before, and thus being able to get a creamy ice cream as we eat it in ice cream parlors, and not many of those crystallized ice creams that we make at home that are in the end hanging around the freezer.

Well once we’ve got the invert sugar done, we let it cool and we already started with our recipe for nougat ice cream.

For that we mix the milk, cream and powdered milk in a saucepan. We stir with a rod and put over medium heat to heat the mixture, stirring so that the powdered milk granules dissolve. When it is warm, we add the invert sugar, the honey and the whipped yolk. We remove and cook until just before boiling, or if we have a kitchen thermometer when it reaches 85ºC. We separate quickly from the fire.

We pass the mixture to a tall blender glass or to the glass of a robot with blades, and add the nougat in pieces. We grind everything for 1 minute. We go to a bowl and film “skin”, that is, with film glued to the surface of the liquid so that it does not form a crust. We chill in the fridge for four or six hours and we go to an ice cream maker and then to the freezer, or if we do not have an ice cream machine, we freeze directly and stir every half hour for three or four times until the mixture is firm.

Read:  goodbye to these AMD and Intel CPUs