Bullfrag
Home Uncategorized The Spanish Stock Market warns Iniesta the risk of being a Binance... 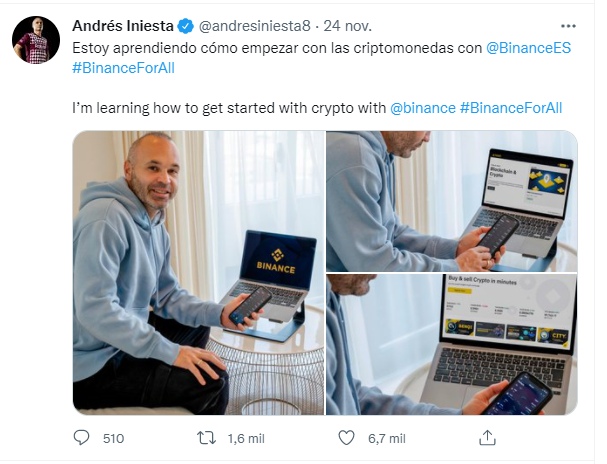 Former FC Barcelona star and current Kobe Japan player, Andrés Iniesta, is a new influencer for Binance, one of the cryptocurrency exchanges that has grown the most in recent years.

However, the promotion made by the player on social networks was not welcomed by the Spanish market regulator, who scolded Iniesta for talking about products that “carry some significant risks.”

“I’m learning how to get started with cryptocurrencies with @binance #BinanceForAll,” the player wrote on his social media accounts, with photos in front of a notebook in a gesture of doing transactions on the Binance website.

The publications did not give any indication of whether or not the company paid for the content, although everything indicates that it is part of a commercial relationship included in a marketing strategy between the exchange and the player.

Iniesta, who played most of his career for Barcelona, ​​was part of the Spanish team that won the World Cup in 2010 and now plays for Kobe. He has 25 million followers on Twitter and 38 million on Instagram. The post received 270,000 likes on Instagram.

I’m learning how to get started with crypto with @binance #BinanceForAll pic.twitter.com/3Km58KrnPG

A few hours later, in a tweet, the community manager of the National Securities Market Commission of Spain, the market regulator of that country, published that he should “inform himself well” about cryptocurrencies (bitcoin included) before making any kind of investing in them or making recommendations to others to do so.

“Hello @ andresiniesta8, crypto assets, being unregulated products, carry some important risks,” the CM of the CNMV told the player on Twitter.

Hello,@ andresiniesta8, crypto assets, being unregulated products, have some relevant risks. It is advisable to read the statement from@CNMV_MEDIOS from 2/9/2021 https://t.co/SWRF73xEJj and educate yourself thoroughly before investing in them or recommending others to do so

Binance, Iniesta and the regulation of cryptocurrencies

Market regulators around the world are concerned with bitcoin in particular and cryptocurrencies in general.

Even with crypto trading platforms that handle large amounts of money and whose operations are mostly unregulated. And that each time they achieve greater penetration through influencers and digital marketing strategies.

The CNMV tweet has very interesting responses. In general, they reproach you for not also warning about regulated financial assets that were promoted by well-known figures and later turned out to be fraudulent.

“A pity that you did not notify Iker Casillas when you supervised the Bankia IPO prospectus,” wrote one user.

“Hello @CNMV_MEDIOS and with the Gowex shares what do we do? they were regulated by you, I went from having 10,000 euros to ZERO, you took the share out of the stock market and started investigating as this 2014 statement says … 7 years later and everything remains the same! ”, points out another.

“The regulated ones do not have any risk as those who bought preferentials, those of the multi-currency mortgages, the investors of Banco Popular or those of the Bankia IPO are well aware,” wrote, ironically, another user on Twitter.