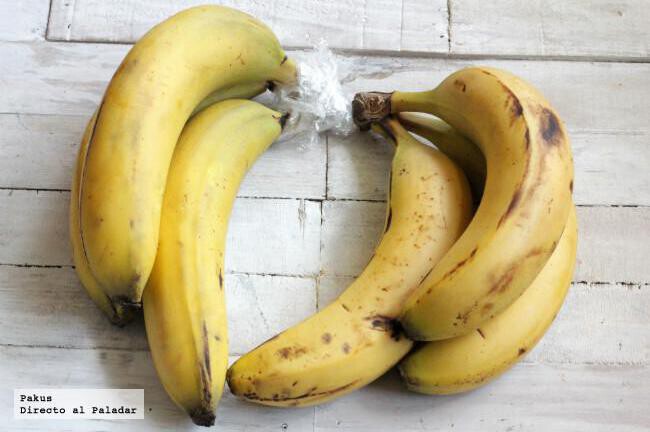 When I saw this trick to make bananas last longer without turning black I had a hard time believing it, but I immediately decided that I had to prove it empirically. And, once I have verified that the trick works, I will tell you how to do it so that you can use it from now on (like me).

The bananas on the left and those on the right are from the same bunch, but those on the left I protected them with the trick that I will now tell you and the others I left as is. Both were for seven days in the fruit bowl, at room temperature, taking into account that I have taken the photos during the first days of September in Madrid, keeping the bananas at an average temperature of less than 20º.

How to make bananas last longer without turning black

Some time ago my colleague Marta did a similar test, using zip bags and subjecting some bananas to a field test consisting of putting them in the refrigerator in two groups, some inside the bag and others without it. The result was quite evident since bananas tend to turn black right away If you keep them in the fridge and with his method, they lasted for a long time.

The trick to make bananas last longer without ripening that I have come to tell you, part of the fact that the ripening of the banana usually begins to occur starting with the tail or peduncle whereby the bananas are linked together in bunches. When the fruits are pulled from the plant, some enzymes are released that in contact with oxygen begin to produce the oxidation and ripening of the bananas.

Therefore, as a first piece of advice, it should be said that bananas united in a cluster of 5 or 6 units ripen more slowly than if we separate them one by one, since then the surface by which they would begin to oxidize would be much greater. If we have a bunch and we cut it in two halves, we can do the test and see how they mature with or without the simple trick that we are going to put into practice.

Read:  Do you play online? Watch out for the data collected by BattlEye

We will need: 6 bananas, a knife, scissors and plastic wrap or food plastic.

We cut the bunch in two halves with the knife. With the scissors we cut out a piece of plastic or kitchen film about 5 cm wide. To protect the bananas, We carefully wrap the tip of the bunch with kitchen film, trying to cover both the upper and lower part and even if possible we pass a round between the bananas. The result will be as in the first photo.

In the following photos you can see the banana evolution after one, three and five days, being the photo on the cover of this post that of bananas after a week. I think the pictures speak for themselves. Being protected, there is less oxidation and less ethylene is released, which is responsible for maturation and color change as a consequence of the appearance of the classic spots of the Canary Island banana.

The bananas that he had kept naturally were more ripe than the others, although at the end attached to the tail they had already changed color and were soft and brown. As for the rest of the banana, (central zone and the other end) it was slightly more mature than the bananas protected with the film, although it was not soggy or pureed either.

I hope this simple trick to prevent bananas from turning black is good for you, especially when you buy more quantity than expected and you do not plan to make any of our recipes with bananas.

How can someone with diabetes drink alcohol more safely?

A winter storm hits the eastern United States and Canada