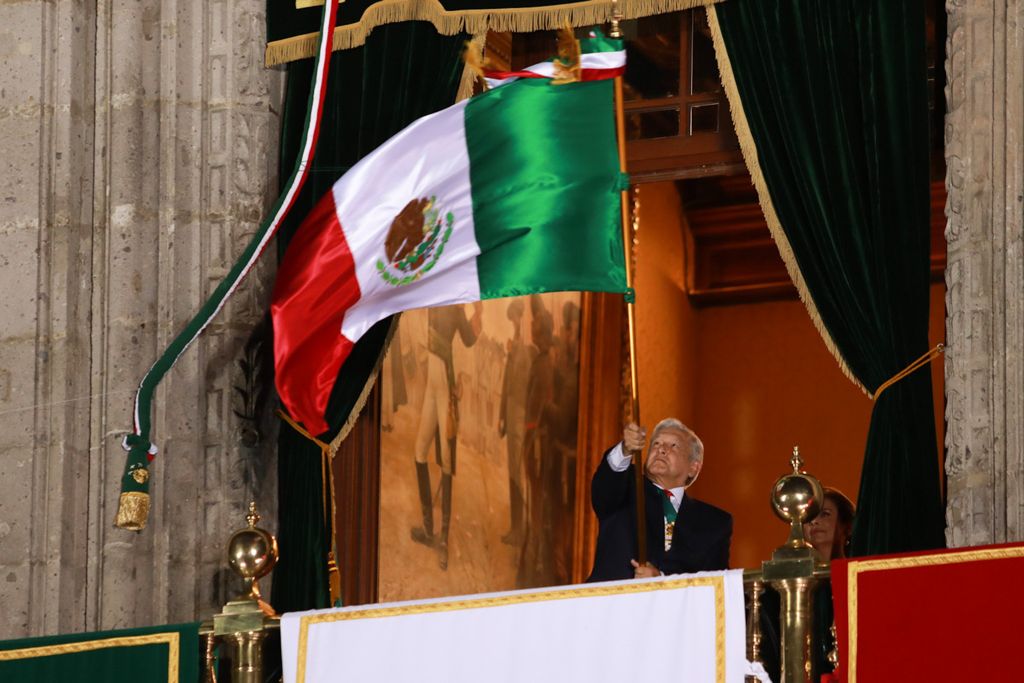 Ten streets bordering the capital’s zócalo restrict the entry of those who sought to reach the first square for the ceremony of the Cry of Independence, the second of the government of Andrés Manuel López Obrador, without an audience.

For many, the extreme security that revolved around this day is surprising, like the one with President Enrique Peña Nieto.

“Well, not that everything was going to be different, the proximity to the town, this man is a pure farce,” said Sebastián, who had his face painted with the hope of entering the zócalo.

Read: AMLO gives Grito for the 211 anniversary of Independence in front of an empty Zócalo

In all the accesses to the plate of the Constitution, elements dressed in black and with a pin with the logos of the Army, the Navy and the Air Force registered the curious who wanted to approach.

What street are you looking for; go and ask the elements of the Presidential General Staff, “said the police from the capital who assisted in the security work.

Carmen Alponte, who traveled from Chihuahua, does not believe that President López Obrador has deployed an operation of this magnitude.

“Well, not that much love for the people? I wanted to shout with him, but it is a madness to be able to get close ”, she said, dressed in an overflow that she bought at a street stall selling national articles on Calle de La Palma and Madero.

The capital’s plinth was an impenetrable bunker.

Jesús Hernández bet that the harvest of national articles would bring him better profits if it was located on the pedestrian promenade of Madero and La Palma. This was the last point where the citizens of the capital could get close to, least of all, hear the Scream.

People came to buy plumes with led lights and wreaths of green, white and red flowers. From 35 pesos the smallest to 70 pesos the one with led spotlights with the national colors.

Read:  They "do not ask for a raise", they rent robots due to a shortage of labor

“The truth is that the year was better despite the pandemic,” he said.

In contrast, the first frame is all silence that is only interrupted for the military to give directions to the Mexican Army Choir that sang the national anthem and chanted the 20 cheers of López Obrador.

Walls of three fences plus the custody of the elements of the “presidential staff” guarded.

Unlike Correo Mayor, Cinco de Mayo, Pino Suárez, November 20 and September 16 that flow into the zócalo, in the surroundings towards the Central Axis everything is party.

“Long live Mexico, you bastard” is the most listened to harangue, nations and foreigners unite which unleashes the joy of the attendees.

Inside, right on the slopes of the first capital painting, everything is a control.

The expectation and monotony were only interrupted by two rehearsals by the Oaxacan singer Lila Downs. The surprise for the capital’s troubled by the COVID-19 pandemic was transformed in Latin America written by Calle 13, one of the president’s favorite groups.

True to his style of governing, the Tabasco came only to the presidential box. With the national flag the campaign brought by Dolores Hidalgo touched.

-What did you think of the Scream?

-Bored, I’d better have stayed at home, people wanted to celebrate and nothing, we wouldn’t have come to the zócalo, ”said Ana García.

Arceus shines in a new trailer introducing Kleavor, the evolution of Scyther