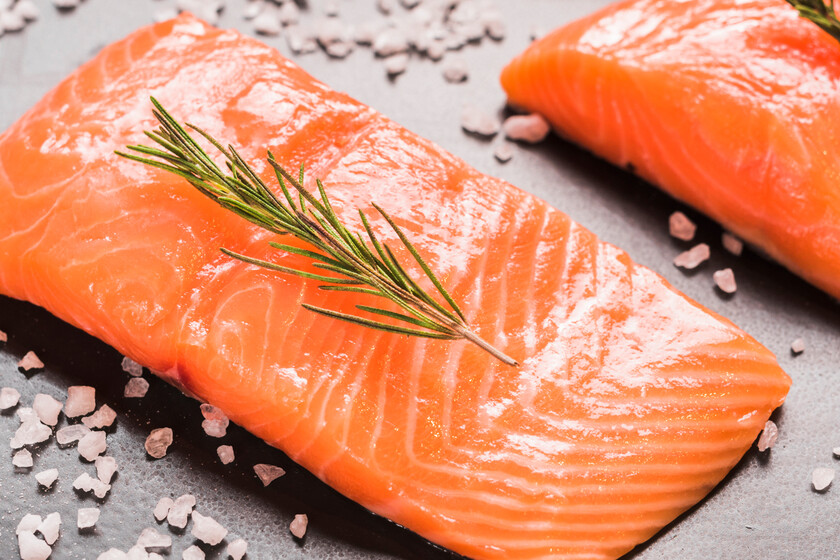 Of intense orange color, salmon has achieved great levels of success in our country at the expense of its flavorof the ease of its consumption and of being at quite affordable prices throughout the year in our markets.

This is mainly due to the fact that it is an aquaculture fish (which does not have to be bad), but it allows us to find salmon in fresh and frozen versions throughout the 12 months with practically no problem and some prices at any time.

However, that the salmon that we eat is fresh, frozen or smoked with those powerful orange colors it has nothing to do with the actual diet salmon have in the wildbut with a pigment that is added to the feed that these farmed fish receive.

With a much more different diet compared to specimens that live in the wild, which They usually feed on small crustaceans and other fishfarmed salmon have a feed-based diet that is most often made with fishmeal and vegetable meal that have a high protein load.

It is not because he salmon is a rather voracious animal and one of the great predators of the river basins of northern Europe and northern Canada and Alaska, where it is still quite common to see these specimens in the wild. In Spain, on the other hand, although there were salmon in the Cantabrian basin, now its presence is much more residual.

However, aquaculture gets us bent when thinking that salmon should have a very intense orange color. In fact, when we go to a fishmonger and see slices or loins of salmon and they are not as orange as we usually think, it is quite possible that we throw out their purchase.

This does not mean that they are lower quality salmon because they are less orange, since when we see farmed salmon between 10 and 15 euros per kilo, we can be quite clear that these specimens have never been in the wild.

However, since the mind is so capricious and our way of buying also tends to value color as a guarantee of quality, We think that the more orange a salmon is, the better it will be..

Unfortunately, none of this is true, since The quality of farmed salmon does not depend at any time on the pigmentation of its skin unless we are talking about wild salmon (which are difficult to find in Spain) and that they do have a somewhat more orange pigmentation, but not necessarily reaching the extremes that we know, and they obtain it from the diet rich in crustaceans that they follow.

What happens is that the creators of salmon in captivity use a pigment called astaxanthin within the feed of the salmon itself, which is a carotenoid that through the diet manages to dye (in a healthy way, never harmful) the meat of salmon or trout, offering sea orange tones that we demand in this type of fish.

In fact, this astaxanthin is a naturally occurring antioxidant in a certain type of microalgae and phytoplankton, from which it is mostly extracted to later form part of the salmon’s diet and thus offer this natural tincture that is obtained mainly from the algae Haematococcus pluvialisa species that is also beginning to have a great impact within the cosmetics industry due to its anti-aging properties.

In DAP | 17 Delicious Fresh Salmon Recipes
In DAP | Baked salmon, the easiest recipe in the world to enjoy oily fish

Artifact, the AI ​​news feed from the founders of Instagram

origin, properties and four recipes to prove it