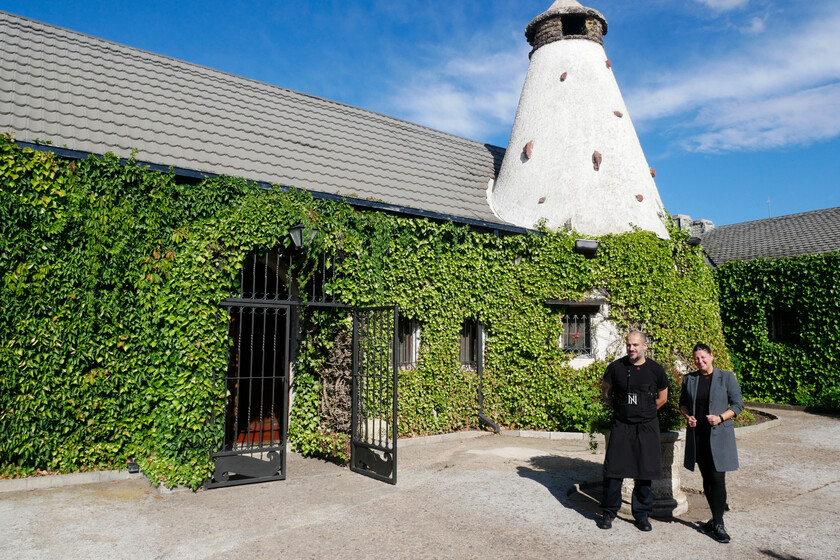 La Venta del Sotón is an institution of Huesca gastronomy. Founded in 1967, in the small town of Esquedas, was born to feed the travelers who traveled the old road that linked Huesca with Jaca, Tarragona, Pamplona or San Sebastián.

Since its inception, the sale was born with the intention of being a good restaurant, focused on publicizing the typical food of the area. Under its huge fireplace, built in the style of the old houses of Alto Aragón, sausages, sausages, ribs were roasted … And, of course, its famous lamb.

Although Sotón has always been a reference for good food in the area, many in Huesca were surprised when, in the latest edition of the Michelin Guide, the restaurant was made with a star. And he achieved it with a new proposal, on the upper floor of the sale, baptized as Espacio N, which had been filming for less than two years and which had hardly been talked about in the press. A personal project of Ana Acin (daughter of Lorenzo, the Alma mater of the sale, who died in 2002) and the cook Eduardo Salanova, natural from Canfranc Estación and tanned in the stoves of Echaurren or Aponiente.

The Espacio N dining room radically breaks with the traditional style of El Sotón, both with regard to the kitchen and the dining room. Upon entering the space, which is reached after having a few aperitifs in the classic vending fireplace, you move to another dimension. The room, designed by the decoration expert Julio Luzán -who has worked in films like The Impossible and even Game of Thrones- is diaphanous. A minimalism that leaves room for the maximalism of a drastic kitchen in its approach.

The sale, which retains all its tradition, and the new Espacio N, located on the upper floor.

A work of culinary history

The menu for the sale of the Sotón is presented as a historical tour of Aragonese cuisine, recovering old recipes that have fallen into oblivion, but which today are surprisingly modern.

“When we had a clear idea of ​​creating a gastronomic restaurant here, it was the sale itself that led the way, as it has been and is a benchmark for Aragonese cuisine ”, explains Salanova. “Avant-garde cuisine had to revolve around this, it is our land and it is what we feel comfortable with. Since 2015 we did a lot research work, reading books, trying things that were not used, investigating recipes that we found droppers and trying to see how they work ”. 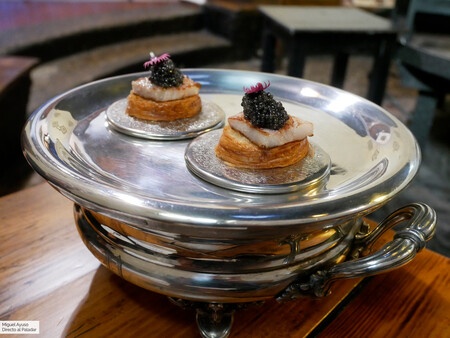 Espacio N’s journey begins in the fireplace of the old vending fireplace, where Salanova prepares a bite of Latón de la Fueva double chin on the grill, which is served on a slice of croissant and finished with caviar. Delicious.

This research work has led them to the point of even looking for forgotten products, such as Mainar turnips (Zaragoza) that Juan Altamiras, a Franciscan friar from Aragon, mentioned in 1745 in his seminal cookbook Nuevo arte de la cocina española. Acín and Salanova went there to verify that only one octogenarian continues to grow this variety for personal consumption. His idea is to try to get them back on their feet, and in the meantime, they serve a lime-soaked turnip ravioli with grilled lobster and sour cream. 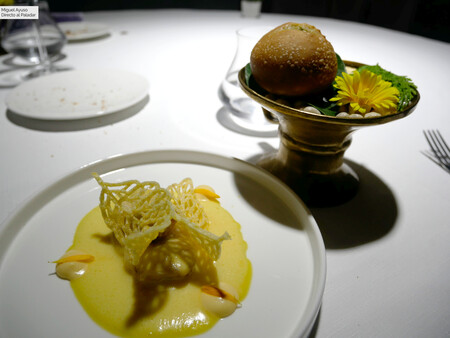 Although it sometimes seems that history is just an excuse to create new haute cuisine dishes, Espacio N’s panteraguélico tasting menu is a journey through the never seen Aragonese cookbook, which will surprise those unfamiliar with its cuisine, but even more so those who, like me, know it, because it allows to discover unusual possibilities of products and combinations

The cakeFor example, it is a local sausage, made from pig’s blood, breadcrumbs, flour, butter and spices. It is similar to blood sausage, but for my taste much coarser and with sweet notes. Although I love it with fried eggs, it is not the sausage that I would take to my grave. In N Space, however, it takes on new life accompanied by a smoked eel tenderloin and kabayaki sauce. Even the humble borage becomes an exceptional morsel.

Read:  LG launches a new system for Smart TV: what will happen to webOS? 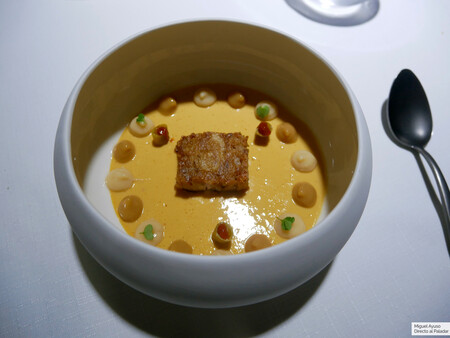 The interpretation of the recao of Binefar, an ancient dish claimed by the gourmet Teodoro Bardají, which Salanova turns into a chawanmushi. Very tasty.

The rebirth of Aragonese cuisine

“Oddly enough, we are only at the tip of the iceberg of Aragonese gastronomy,” explains Salanova. “There is a huge amount of recipes and techniques that have yet to be exploited. Aragonese cuisine is going to boom, as is happening now in Andalusia, which is at the tip of the spear. In Aragon in five years there will be a batch of chefs who are going to put in value that Aragonese cuisine, which mixes historical cuisine of the Crown of Aragon, has part of Catalan cuisine, has Arab roots … It is a very cuisine delicious”. 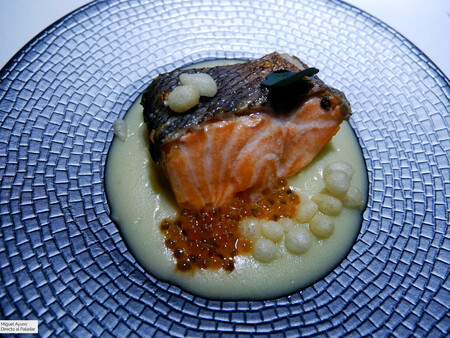 Aragonese trout is served cured in salt, with an emulsion of Teruel ham and crunchy tempura. Also very good.

Rich and forceful. If there is a problem with the menu – and I sure regret saying this – it is that it is extremely copious. There are 16 passes. And we are not talking about small bites. Perhaps the dish that I liked the most was Salanova’s particular interpretation of Aragonese ajoarriero. A sublime dish of cod cocochas, bathed in a hollandaise of the cod itself and garlic and accompanied by potato chips. Instead of presenting a cococha, two come, but the dish is also accompanied by a butter bun with parsley. A gochada that is impossible to leave half but with which many would already be eaten.

To finish off the salty part of the menu a light thing: the ternasco trilogy. Three dishes with lamb as the protagonist. First the neck, stewed in a tripe sauce and accompanied by a grilled red shrimp –you die–; later, a confit potato in the broth of the roasted lamb and accompanied by its skin –brutal–; and, to top it off, a royal with foie and civet in homage to Alain ducasse that, needless to say, does not float in space.

Impossible to stay hungry after going through the trilogy of the lamb. Quite a success.

Desserts are cool too

When you can’t take it anymore – especially if, like me, you are unable to leave anything that is so good on the plate – the three desserts. And you can’t leave anything on the plate either. The pella ice cream, toasted cauliflower cream, summer truffle and whiskey jelly are outstanding; and, even more, Salanova’s reinterpretation of the pumpkin patty, typical of the area, with vegetables roasted in salt. One last. 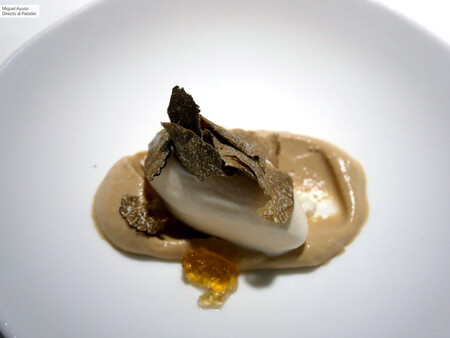 We rolled out of the sale, thinking only that it would be alright go one day without having to drive, Because Acín has some wines that are also attractive, with a menu that is focusing on rare, very interesting natural wines. The two we tried were excellent and very curious.

The Espacio N only has a decorative element, a relief of Ana’s father, Lorenzo, who died before his time, in 2002. “He was a visionary, already at the time, and somehow he had to be”, explains his daughter, that has carried all the weight of the restaurant on his shoulders, to which he dedicated himself body and soul since his death. “You would have loved this room. It is the evolution of the Sotón ”. 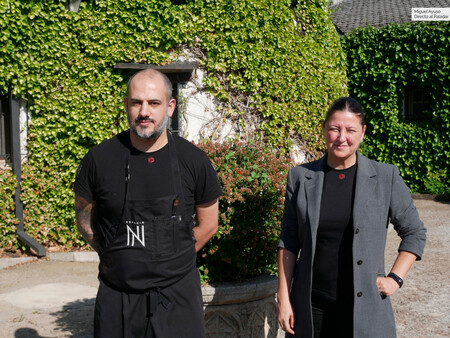 Eduardo Salanova and Ana Acín: a very well oiled couple in the kitchen and living room.

What to ask for: Until the end of the season, in December, only a single tasting menu will be available.

Meatballs of veal and caramelized onion with tomato sauce and basil, recipe

quick recipe for a healthy, light and tasty side dish or dinner

Salpicón acevichado of mussels and octopus, ginger and coriander fresh and light recipe

Chrono Cross remaster would be revealed in February

The best Call of Duty according to VidaExtra readers is…