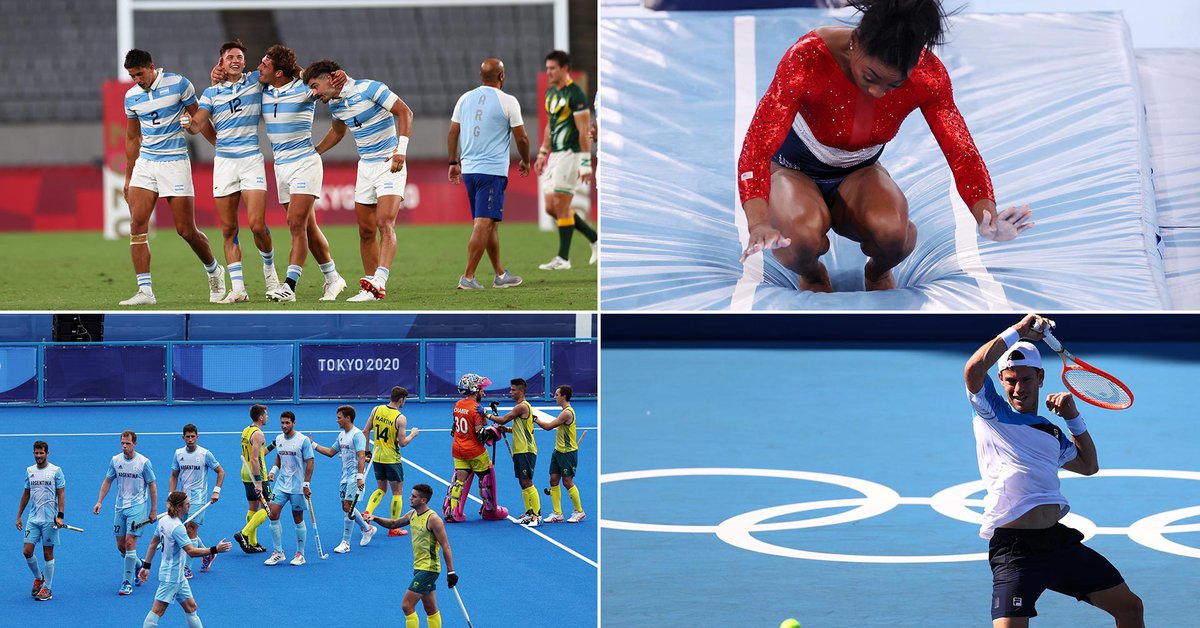 The action of the fourth day of competition in Japanese territory had several outstanding performances. At the national level, the epic triumph of Los Pumas in the rugby 7 modality against South Africa to have a double chance of obtaining an Olympic medal. For its part, Diego Schwartzman defeated Czech Tomas Machac 6-4 and 7-5 and advanced to the round of 16 in Tokyo.

On the other hand, there was the loss of the Lions 5 to 2 against Australia (they still keep their chances of going to the round intact) and the elimination of Nadia Podoroska. The tennis player succumbed 6-2 and 6-3 against the Spanish Badosa.

HIGHLIGHTS OF DAY 4 OF THE OLYMPIC GAMES:

The Pumas imposed their hierarchy in rugby seven ante South Korea and sealed a humiliating victory of 56 to 0 to guarantee a place in the quarter finals of the contest. Then, against South Africa, they gave the big blow by playing practically the whole game with one man less (expulsion of Gastón Revol). The national team prevailed by 19 to 14 and got among the best four of the competition.

Emanuel Lucenti he had a premature farewell on his debut when he fell in less than 25 seconds in the -81kg category heats in judo against Bulgarian Ivailo Ivanov.

Romina Biagioli, who despite a rib injury managed to finish the women’s triathlon race in 33rd place at 12:06 of the historic winner of Bermuda, Flora Duffy (first gold medal for her country).

The Lions were surpassed by Australia in his third match of the contest when he fell 5 to 2 (They tied with Spain and then beat Japan for Group A), but they are still in the race in search of qualification for the next instance.

Ana Gallay and Fernanda Pereyra lost to the Canadian duo made up of Bansley and Brandie in two sets: 22-20 and 21-12.

The Argentine duo made up of Fernanda Russo and Alexis Eberhardt was eliminated in the classification of the mixed 10m event. compressed air rifle, finishing in 27th place among 29 participants.

READ:  Mexican athletes are at the height of the world: Ana Gabriela Guevara

The Buenos Aires Victoria Travascio and María Sol Branz occupied the tenth place in the general classification of the 49er FX class.

Diego schwartzman he beat Tomas Machac of the Czech Republic 6-4, 7-5 and advanced to the round of 16 in Tokyo. The Little He will face Russian Karen Khachanov in the next phase.

Nadia podoroska, meanwhile, fell to the Spanish Badosa (6-2 and 6-3) and said goodbye to the women’s individual tournament. The Rosario will be back in action tomorrow, as she will make her debut in the mixed doubles with Horacio Zeballos.

The hit of the day was in the women’s team. Naomi osaka, one of the main candidates and in charge of lighting the cauldron at the opening party of the Olympic Games, lost 6-1, 6-4 to the Czech Marketa Vondrousova.

Sofía Gómez Villafañe finished in 23rd place with a time of 1:25:13, 9:27 behind the winner, the Swiss Jolanda Neff. The podium was made up of three Swiss cyclists (Sina Frei and Linda Indergand).

The United States team, one of the main favorites in the previous one, suffered the loss of Simone Biles after her presentation in jump (it was the first exercise of the North American). The young woman had to be replaced by Jordan Chiles.

The Russian team took advantage of its chance to break the hegemony and won the gold medal thanks to a total score of 169,528. The United States finished in second place, with 166,096. In last place on the podium was Great Britain (164,096).

Beach volleyball for men: Julián Azaad and Nicolás Capogrosso fell to the Dutch duo of Alexander Brouwer and Robert Meeuwsen (21-14 and 21-14).

Heroic triumph of Los Pumas 7 in rugby at the Olympic Games: they beat South Africa with one man less and are in the semifinals

Unusual episode in the Olympic Games: a boxer tried to recreate the controversial scene of Mike Tyson by biting the ear of his rival

James Gunn to work with DC Comics again in the future