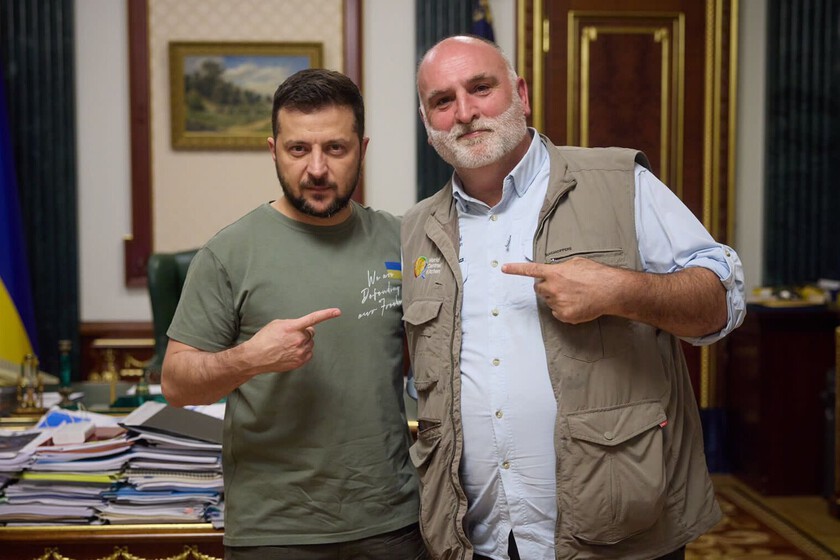 The Asturian chef José Andrés and his NGO World Central Kitchen came to help the Ukrainian population a few days after the war began after the Russian invasion. Since then, the organization continues its humanitarian work focused, fundamentally, on supplying basic foods and prepared menus on-site, among other tasks. A job that has not gone unnoticed by Volodymyr Zelenskypresident of the country.

The Ukrainian president wanted thank personally the support shown to the chef and his entire team, meeting with José Andrés himself in a meeting that the chef based in the United States has shared on his social networks.

Good meeting today about the Humanitarian work of @WCKitchen in @ukraine Helping displaced+refugees since day one of this war. I have thanked the more than 5k Ukrainians bringing hope one plate of food at the time #ChefsForUkraine 130 million meals! Ukrainians feeding Ukrainians! pic.twitter.com/8JUSUa2eFF

Good meeting today about the humanitarian work of World Central Kitchen in Ukraine, helping the displaced and refugees since the first day of this war. [Zelenski] He thanked the more than five thousand Ukrainians who brought hope with a plate of food at that time through the #ChefsForUkraine initiative. 130 million meals! Ukrainians feeding Ukrainians!

José Andrés attended the meeting accompanied by two ukrainian cooks participating in the operation of the humanitarian organization, and shared with Zelenski the different jobs and the deployment operation of means that they develop in their country and on the borders to help refugees, displaced people and any person affected by the conflict in need of help.

Read:  Pokémon GO and the rest of Niantic games have closed their servers in Russia and Belarus due to the conflict with Ukraine

World Central Kitchen continues its work to this day, now focusing more on responding to the urgent needs of the most vulnerable families who have returned or remain in the country, distributing hot dishes, menus of all kinds, food kits and basic products, and never stopping cooking to deal with a conflict that, as José Andrés himself affirms, has also become a food fight.

We feed an island: How the kitchen can rebuild life (Essay)

In DAP | José Andrés’s NGO sends Tupperware to the firefighters who had denounced the little food they receive working on the fires
In DAP | Russia attacks a train with food from José Andrés’s NGO in Ukraine: “This is not going to stop us”

what is it for and how to do it right