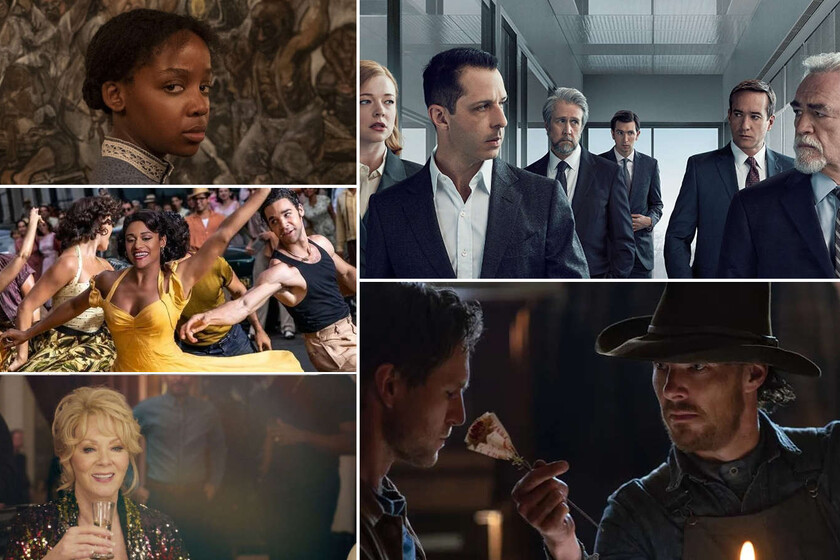 With the absence and crooked gesture of practically the entire industry that it claims to celebrate, The Golden Globes have faced their toughest gala. Few imagined that the lackluster one in 2021, divided into two scenarios located on each end of the country, would spell the end of an era.

Punished by their television partner and without the possibility of having the usual meeting of stars (and not so much by Omicrón), the HFPA decided to hold a discreet, private gala, without the press, without anyone to bother them and without even an online broadcast. But the prizes were going to be given: we would find out to whom, but not the environment in which they are given..

What has happened so that we are like this

Before going to the hermetic gala itself, let’s do a brief review of what happened. When we talk about Golden Globes, the image that they have transmitted all their lives (and that has been reinforced by famous directors) It is an ideal event for the group of Russians with a desire for vodka who organized it.

In fact, some wild elections both in nominations and in the winners suggested that, to be considered the “prelude to the Oscars”, they didn’t take themselves as seriously as we might imagine. It’s a bit of the image of that funny guy who gets drunk at parties but we spoil it … until we stop.

And it is that in recent years, the Foreign Press Association in Hollywood I was dragging a pretty serious image problem. Problem linked to the alleged lack of diversity among their stagnant ranks (they were also quite closed in their admissions) and to alleged irregularities in their funding.

Like everything else, it is one of those things that does not come from one day to the next, but has eroded over the years until the great players in the industry (Warnermedia, Netflix, etc.) They said that it has come to this point: either they changed their policies or bye bye. This joins Tom Cruise returning his accolades or NBC blowing up the situation by announcing that they are terminating their relationship with the Golden Globes, running out of television partners.

The HFPA, for its part, assumed the mea culpa and announced changes that would be implemented (although they would take time) in order to renew its image. An image that of course they wanted to untie as soon as the gala began with a message from Helen Hoehne, president of the HFPA:

“The Golden Globes are a bridge to a global audience of many colors, many faiths and many cultures, all united by the same passion: the love of movies”

Do you know about that friend who insists over and over again how “cool” and modern he is? Well, when they weren’t giving awards (and when they did, too), the HFPA talked about how diverse, inclusive and charitable they are. A communication strategy that more than works, raise suspicious eyebrows and cause some reluctance.

Read:  new teaser trailer of the latest episodes of the Netflix series

That spoils that apparent cleanliness of image that they have wanted to convey. Be careful, I am not saying that the awards in that direction are not deserved, only that the attitude in the communications they plant the seed of doubt around the intention with which the prizes are given.

The first half hour had O Yeon-su winning best supporting actor in series for ‘The Squid Game’, Ariana DeBose getting the best supporting actress in a movie for ‘West Side Story’, ‘Encanto’ as an animated film (which is worth, being Disney, few surprises but thematically) and ‘Drive My Car’ as a foreign film they already marked a “racial” course.

Obviously (and thank God), it was not going to be all like that and soon, in the series, it began to smell like the night of ‘Succession’. The excellent HBO series began to stand out taking Best Actor in a Drama for Jeremy Strong and Best Supporting Actress for Sarah Snook. Along with the best drama, it would become one of the night’s fictions.

We have even had some moment of the Golden Globes being those awards that we love so much, that is, dice to the mamarrachada, with the award to Nicole Kidman for her role in ‘Being the Ricardos’ over Kristen Stewart’s Diana Spencer. It is also true that the actress is one of the favorites of the association and, in fact, this is her fifth balloon (the last one for ‘Big Little Lies’).

Without skipping the script

Even so, the narrative of the night marked (and remarked) the racial and some of the jackpots pleasantly surprised us like ‘The Underground Railroad’ being the best miniseries, or Mj Rodriguez for Best Actress in a Drama Series for ‘Pose’. What is not so good is to announce that she is “the first trans actress” with the haughty phrase “History has been made!”, giving the impression that he has given himself for being who he is that because he deserves it.

On the other hand, the gala has not deviated too much from what was planned: ‘West Side Story’ for best comic or musical film, the revelation of the year ‘Hacks’ in the series counterpart and ‘The power of the dog’ (with Jane Campion getting the best director) taking the best dramatic film.

The end of the Balloon party (they promised us 90 minutes and it lasted longer) has left us mixed feelings But, in general, and even with doubts about the true intentions of the prizes awarded, I think that there is little that cries out to heaven in matters of merit. It will be necessary to see if this pantomime works and next year Hollywood will back these awards.