The peculiar utopia of Auroville, the city without money, political parties or religion 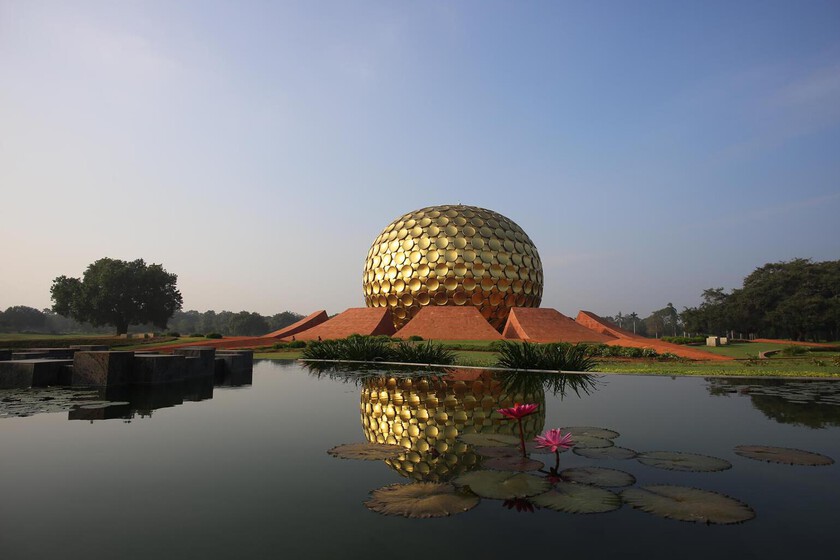 If we have shown anything throughout history, since the distant times of Thomas More, or even since Plato’s Ancient Greece, it is that humans have always been better at theorizing about utopian cities than putting them into practice. The fact that it is difficult for us does not mean, however, that we do not continue trying in the 21st century. Auroville, a town located near Puducherry, in southern India and just five kilometers from the Indian Ocean, is a good example.

It is not the only utopian dream, but it is one of the most powerful, partly thanks to the echo that institutions such as UNESCO gave it in its day. That and that the project is already graying: although it is still far from the objectives that were originally set, it was founded half a century ago.

To locate its origins you have to go back to 1968, to the hippie effervescence. Its promoter, Mirra Alfassa, a Parisian who had studied occultism and was a disciple of the Indian philosopher, yoga teacher and poet Sri Aurobindo, came up with the idea of ​​creating “a universal city”, a global community in which men and women from all the world could live in harmony. She called it Auroville, the city of dawn, also a nod to who she had been her great spiritual companion.


“Auroville wants to be a universal city where men and women of all countries can live in peace and progressive harmony above creeds, politics and nationalities”, declares the community on its website by way of synthesis, thus collecting three of the most powerful premises of his philosophy: it lacks government, money and welcomes all nations. Three ideas to which another equally powerful one is added: in the city its inhabitants do not handle cash as such.

Although any of those four maxims, of course, has its own nuances.

It does not have parties or a political dynamic like that of any other city in use, but that does not mean that its organization is anarchic. It has organs and makes decisions by consensus. At least in 2016, details The countryenjoyed autonomy and an annual allowance from the government.

As for money, Alfassa’s dream was to achieve a society without money and in which collective work and exchange operate, with which coins and bills would lose their meaning. On its page, the community explains how this guideline is translated into practice: “Auroville operates with a cashless economy. One can operate completely cashless. The deal is: if you work for the community at least five hours a day, it provides you with a livelihood, not a salary, but a mix of services, money and entitlements. Very basic, just enough to make ends meet”.

Expenses are charged to a personal account. France24 also ensures that when a new member settles in Auroville he gives up his property to the community and renounces private property. On its website, the community details its day-to-day rules, including how it acts with anyone who tries to take advantage of the system, and clarifies: newcomers “cannot land and wait for a free house, free land or anything else for free; It must be self-sufficient for at least one year.”

The rules are also clear when it comes to religion. In Auroville there are no creeds, which does not take away, emphasize those responsible, that those who choose to settle there are expected to “lead a ‘spiritual’ life.” What you will not find in the villa are practitioners of the main confessions.

Read:  Haaland to Manchester City, reaches an agreement to hire him

“Anyone who is still strongly attached to a specific religion, in the sense of wanting to commit to it and practice it, will find that Auroville is not their place. Although Auroville respects religions and has nothing against their practice, divide the people of the worldwhile Auroville is only interested in unity”, it proclaims on its website.

The community began to walk on February 28, 1968 on the theoretical foundations laid by Alfassa, known in the community as “the Mother”. His is the “Charter”, a kind of philosophical constitution that is based on four principles and that is still in force on a day-to-day basis as an “omnipresent reference”, as defined by the community itself on its website.

His main idea is that Auroville “belongs to humanity”but to join their community whoever arrives must assume that they become “a volunteer servant of the Divine Consciousness”.

The city is organized based on a sketch drawn up in 1965 by Alfassa and which was commissioned by the French architect Roger Anger, author of the detailed plan. Its structure is inspired by a galaxy and is divided into several zones, with arms that seem to unwind and revolve around a central axis, “the soul of Auroville”: Matrimandir, a kind of temple that the community reserves for “individual concentration silent”. Around there are areas dedicated to work or culture and already in an outer ring a “green belt” extends, with forests, farms and settlements.

Its managers explain that the city has a diameter of 2.5 kilometers and a green belt of 5 kilometers and the settlement was initially devised for a population of 50,000 people, a goal that is still a long way off despite the fact that the project launched walk for more than half a century. Today it has about 3,300 residentsyes, with a pronounced multicultural character: according to Auroville, it welcomes people of more than fifty different nationalities.

No one said that building an autopia was an easy task.