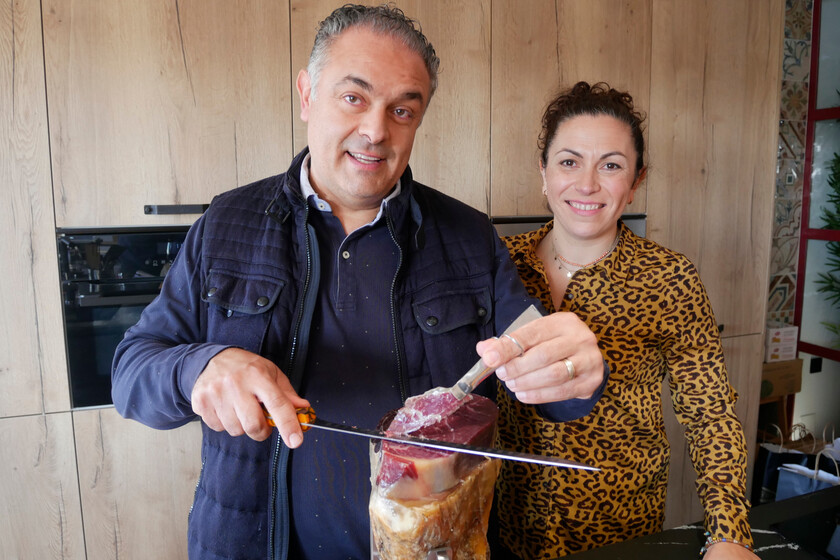 In the shadow of mount Teleno, the highest peak in León, is the region of the Maragateria. The region, populated since ancient times, has had a very particular culture and economy since there are historical records, based on the merchandise transports.

The city of Astorga, the economic capital of the region, was an important crossroads since Roman times: through what is known as Via de la PlataIt connected the south and north of the peninsula and was the nerve center from which trade with Galicia and Asturias was carried out.

It is not surprising, therefore, that the maragatos became expert carriers and traders. The men left their homes for months to work as muleteers: they transported salted fish brought from the Galician coast into the interior – hence the traditional ajoarriero cod – and when they returned they loaded the carts with sausages and other dry-land products.

From the need to preserve the food with which to eat and trade for a long time, one of the best-known foods in the area emerged: the dried meat.

Unlike other regions of Spain, where sausages and cold meats were cured only with salt, in the Maragatería meat has always been smoked to make it last longer. In addition, all the maragatos had oxen with which to move the carts and there was a large cattle hut, which guaranteed the supply of jerky.

The cold meat was used for own consumption, but, above all, for trade with her. For a long time, the biggest buyers of jerky were miners from neighboring Asturias, who had greater purchasing power. They even resorted to barter: the Asturian cecina was exchanged for pork bacon, which was not abundant in the area. Today would not be such a good deal.

The Maragato towns, such as Castrillo de los Polvazares, are made up of large houses with stables. Cars could be entered through its large doors.

From subsistence good to gourmet product

Although cecina has existed in León for millennia –they say that it was already made in Roman times–, only in recent decades the product has been improving, until reaching a quality that can look from you to you to the best Iberian ham.

Since 1994, the cecina de León has had a Protected Geographical Indication

Since 1994, the cecina de León has had a Protected Geographical Indication (PGI), which obliges producers who want to benefit from it to use only the hindquarters of cattle older than one minimum of five years old and a minimum live weight of four hundred kilos. But there are those who have gone beyond these minimum requirements.

Cecinas Nieto, based in Padrorrey, very close to Astorga, is the company that has bet the strongest on developing a premium jerky, with the raw material selected to have the greatest amount of infiltrated fat, more covering fat and 18 months of curing.

The cutting of the hind legs of the cows is the most laborious part of the production of the jerky.

The production, regardless of the quality of the raw material and the months of curing, is always the same, and is regulated by the PGI. The hind legs of the larger bovine are split off in four parts: cap, stifle, hip and against. The rest, the black pudding, mandatory in the classic maragato stew, is sold fresh.

In times, explain Conchi Nieto, the company’s export manager, the legs were cured whole, but considering that they can easily weigh 70 kilos, their handling becomes very complex. Currently, they only curate entire pieces for very specific clients, who want to showcase their power in their restaurants. The same goes for the beef jerky, very limited and only available in very exclusive restaurants –in Cecinas Nieto they make what is served, for example, in El Capricho–

The pieces are dried in parts, to avoid handling whole legs that can weigh 70 kilos

After cutting, the meat is buried in salt for three or four days, it is washed, and it is taken to the first, colder drying room, where it remains between three and four months. After this the pieces go through the smoking room. The meat smoked with oak or holm oak –The most common trees in León– for 15 days, with daily sessions that last as long as the fire can endure. After this, it returns to another drying room, without refrigeration, where it remains for 7 to 12 months, depending on the necessary aging.

Read:  inflation will make food more expensive at the reunion parties (and everything indicates that beyond)

The process mimics the way jerky was once made: the animal was slaughtered in winter, smoked in spring, and it was left to dry all summer, at a relatively high temperature, since the Maragatería is characterized by having a very cool and dry climate in winter and hot in summer.

During the last months of drying, all the pieces must be checked by hand, which are covered with grease from the cow itself and extra virgin olive oil, to prevent molds or undesirable bacteria from entering the interior of the piece.

Every year 200,000 kilos of product pass through the Cecinas Nieto curing rooms.

A family business with a vision of the future

Conchi and her brother Jose Luis Nieto Today they command the company that his father, José, founded, orienting it to the export market where, they assure, the future of the product lies.

In 2018 they opened a new factory to be able to produce the Halal certified jerky, so as not to share a roof with the pork sausages that continue to work in the old plant, also located on the outskirts of Astorga.

Arab countries already account for around 15% of sales, but they plan to expand by Saudi Arabia or Indonesia, countries that require special permits that take years to achieve.

Conchi Nieto, in one of the drying rooms.

The Nietos also do not neglect the local market: from this month their 7-month-old jerky can be found in Mercadona, under its own brand El Buey.

Its 7-month jerky can be found in Mercadona

Business is going well, but as is happening with many products, jerky faces a stock problem, that, together with the increase in costs such as the rise in electricity, is causing the price to rise. It is to be expected that, at Christmas, we will pay up to 20% more than last season. “Now there is almost no jerky,” acknowledges Conchi. “It has been sold more than normal and there is no stock.”

The grandchildren they want to expand the factory, but Conchi complains about how difficult it is to get all the permits: “You have to wait a year and a little for a license. It is not only that people do not stay in rural areas, it is that the bureaucracy is a disgrace ”.

Premium cecina is a cold meat that reaches levels of delicacy similar to those of Iberian ham.

How to enjoy jerky more

Already in the tasting room, we tried the different cured meats of 7, 12 and 18 months of curing. The seven-month-old is very tasty. It is the jerky we are all used to, darker and not too tender. The 12-month-old is rosier, with more infiltrated fat, and softer. Things are getting serious. But the 18-month-old is, quite simply, the best jerky I’ve ever tasted, a cold meat that looks the best Iberian ham in the eye.

The price of this premium jerky, which the company sells under the brand name El abuelo maragato, is 200 euros the piece of six kilos, a quantity somewhat less than that of good Iberian ham. Furthermore, the loss of the product for the final consumer is much lower, since by not including bone there is hardly any waste.

Precisely because it has no bone, jerky is usually sold in machine-cut delicatessens. But the Nietos strongly recommend that you knife cut. This practice is already common in weddings and events in León, but it has hardly spread to the rest of Spain. And the tasting of the product, as with ham, changes remarkably.

The jerky is cut on a special support, in which the piece is placed vertically. Unlike ham, the ideal is to cut the corned beef to counterfiberThis is how the slice, which must be very thin, melts better in the mouth.

To accompany the jerky you can add a splash of olive oil, although in the superior qualities I would do without it without hesitation. It is also common to serve this with almonds, but in the opinion of the Nietos, this addition distorts the flavor somewhat. To drink, they insist, better red wine than white. A great luxury.