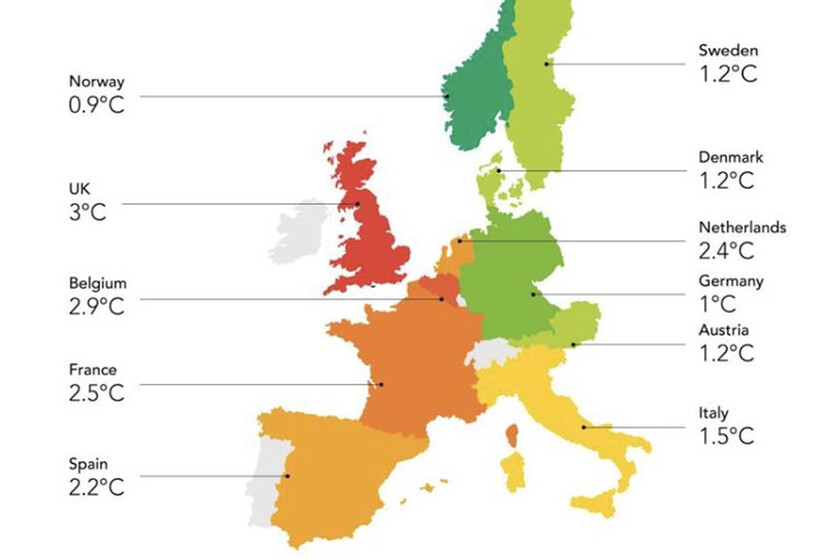 It is interesting what one nation considers essential and others not. Angela Merkel was once asked what she thought about Germany. His answer surprised many: “I think in airtight windows. No other country can build windows as beautiful and airtight as ours.” It is probably the most nationalistic quote you will hear from her. But he was right: German windows don’t allow even the slightest draft. And you can tilt them thanks to sophisticated hinge technology.

What went through Merkel’s head was not a trifle, far from it. Just search YouTube for “German windows” to discover a whole sub-genre of videos in which people from Korea and the United States are fascinated by the mechanism and efficiency of our European windows.

A map to understand it. A study, carried out between December 2019 and January 2020 in 80,000 homes, concluded that a house in the United Kingdom with an indoor temperature of 20 ° C and an outdoor temperature of 0 ° C loses an average of 3 ° C after five hours. Compared to some western European neighbors such as Germany, UK homes lose heat up to three times faster. Spain is not in the best position either, it loses 2.2 ° C. But Germany takes the cake: it barely loses a grade. It was their windows, of course.

Madame Chancellor, what feelings do you associate with Germany?

Merkel – “Well-sealed windows! No other country can build such well-sealed and beautiful windows. “

What about our windows? We can thank the environmental movement and the oil crisis in the 1970s for Merkel’s objects of praise: Windows were required to have circumferential rubber gaskets and frames designed to keep heat inside a building, by law. The first regulation on thermal insulation is from 1977. And, of course, there are inspection authorities and quality controls to maintain the standards. In fact, in the window and door market, there are two main types that stand out: those from North America and those from Europe. Climate, energy costs and energy policies have influenced the two continents to manufacture one and the other.

But we Europeans won. European windows have been tested to the highest standards in energy conservation and product quality. They have stood the test of time and proven to be more efficient. They are environmentally friendly as they strictly adhere to Passivhaus standards and thus reduce the ecological footprint of the building. The high costs of energy in Europe have led designers and technicians to make maximum use of natural resources of sun and air and therefore can be regulated to allow maximum air circulation between the exterior and the interior of a house. They even allow hot air to escape and cool air to enter through various features.

North American windows come with limited options for harnessing energy for self-sufficiency only. The other important factor that encourages little innovation in the mechanisms is the lowering of energy costs.

Thermal efficiency. To make it simpler: more used glass, better insulating property. European windows are more resistant to condensation, which reduces energy consumption especially in colder climates. While most windows in the US use double pane models, European windows have triple pane or even quad pane along with built-in blinds. Although recently North American windows have been using triple glazing, they have smaller gaps between them compared to European ones. Therefore, they are less resistant to the weather outside.

The use of non-conductive materials in European windows (UPVC, Low-E glass and a low U-value) improve the thermal efficiency of window glass. UPVC windows reduce infrared and ultraviolet rays that penetrate through glass, without minimizing the amount of light entering the home. That keeps the heat outside in the summer and prevents the inside heat from escaping during the winter.

Why in Spain they are smaller. You may have never wondered why our designs are smaller than the rest of Europe. The average size of a two-pane window in Spain is 1.15 meters high by 1 meter wide; In Switzerland, a similar standard model is 2.15 meters high by 1.20 meters wide, according to Leroy Merlin stores in both countries. “The perception is clear, there they stop being a hole in a wall to become a transparent wall, explained the architect Carlos Tomás in this EL PAÍS report.

If in Spain we have an average of 2,500 to 3,000 hours of light a year, in countries like the Netherlands they have 1,600. So it seems logical that the windows here are smaller, perhaps as a measure of sun protection. But it was not always like this. You only have to think about the vertical balconies on the streets of the center of Madrid or Barcelona to realize that one day our constructions embraced the sun with open glass and resorted to blinds and shutters to protect themselves from it when necessary.