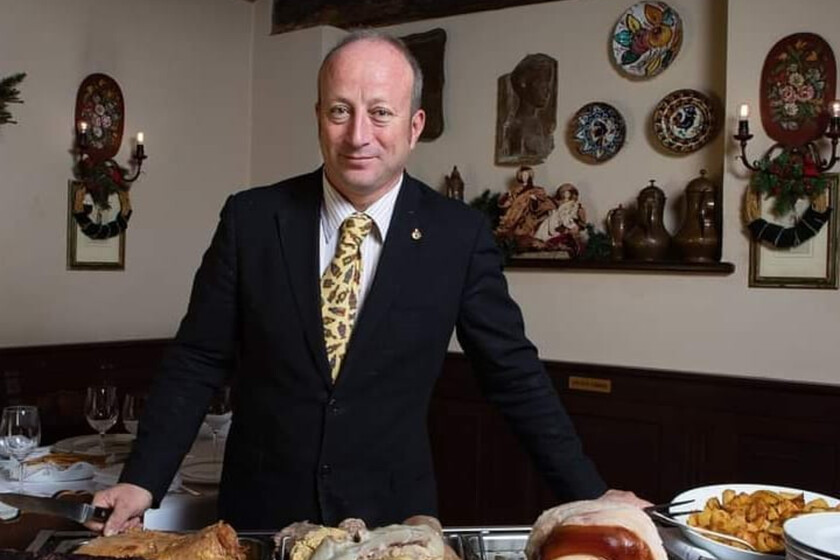 Car goes, car comes … Thus for more than half a century when Arnaldo Degoli, aspiring singer and hotelier, decided rent a small restaurant in Rubiera, a then small town about 15 kilometers from Modena (Reggio-Emilia), what we know today as Arnaldo Gastronomic Clinic.

Now he drives the cars Roberto Bottero, Arnaldo’s grandson and member of the third generation of hoteliers, who runs this place that sports a Michelin star for more than 60 years.

Nobody else has succeeded, breaking a longevity record that has lasted since 1959, three years after Michelin decided to publish the guide in the transalpine country, and has remained in it ever since (except for a couple of years moved in the nineties). A family milestone what is at the same time relic and trip to the past, but it never stops moving.

That story does not tarnish impasse biannual, in a restaurant that surprises by present your entire kitchen in carts, serving their succulents directly from them. From the antipasti cart to the dessert cart, necessarily passing through the boiled and cooked meats.

Clinica Gastronomica Arnaldo is in Rubiera, about 15 kilometers north of Modena.

After working in France as a cook, Arnaldo Degoli (born 1907) returned to Rubiera and decided lease the restaurant which was on the ground floor of the Acquila d’Oro hostel. There he dedicated himself to feeding as he had seen in France. However, it would not be until the 1950s when he decided to incorporate the car system into his proposal. From there, to heaven.

Traditional cuisine, guided by his wife, Lina, who was the other pillar of the restaurant, and who put the traditional recipes of Emilia-Romagna on the table. We talk about the cappelletti in brodo (a stuffed pasta that they make daily and that is served with broth) and also of the spugnolata, a recipe for morel lasagna (or mushrooms in season) that is the star dish of the house.

With the premise of the car, Arnaldo established a custom that still lasts and where some of the cars have been in the house for more than forty years, explains Roberto Bottero, his grandson, and in charge of the restaurant for more than 20 years.

“We have not changed anything. We have the same number of cars as before. If we have a full restaurant, two are for cooked and roasted, two for sweets and another two for antipasti and vegetables, “he explains after the service.

This is how they have been maintained, even in the decoration, which is an anachronism that is appreciated when you arrive at Rubiera, where The name ‘Clinica Gastronomica’ will surprise more than one. 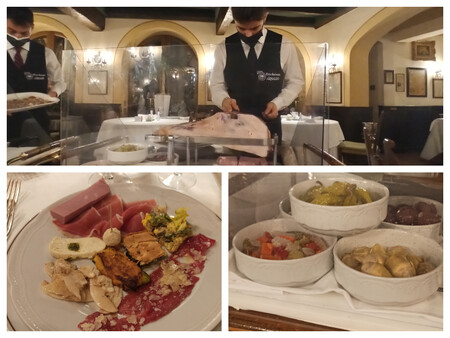 The most particular thing about Clinica Gastronomica Arnaldo is the car service, starting with the antipasti.

The leitmotif from a house that was close to the Modena Polyclinic, which is why during the 1960s it was common for doctors and doctors to come here. Arnaldo, with a hint of sarcasm, He said that his restaurant was indeed a clinic, because customers always came out of it happy.

An icon of Emilia Romagna who has also heard siren songs from abroad. “Have people ever come to offer us money so that we could set up another Gastronomic Clinic. Here, in Italy, but also in New York and the United States, but that is impossible, “acknowledges Roberto.

The liturgy of the chariot 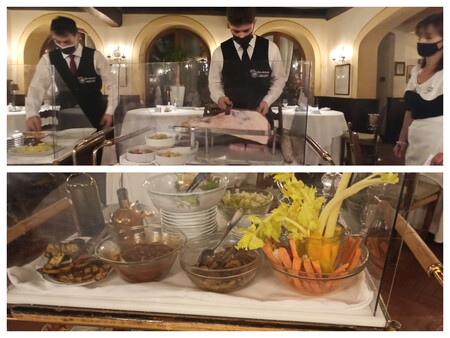 The first car is the antipasti, including local sausages. The vegetable one is presented together with the meats, as a garnish.

Going to Rubiera, a frequent crossing point of the Via Emilia that connects Parma with Modena, is quite frequent. The reason why customer loyalty is high, even to move to a town that one would think was off the gastronomic map with the naked eye.

Nothing is further from reality, customers come daily (even in dinner services, which are traditionally complicated on weekdays in Michelin star restaurants), seeking equal parts traditional cuisine and complicity.

It starts like this the parade of cars, starting with the antipasti. Some local cold meats such as mortadella from Bologna, carpaccio and prosciutto from Modena are mentioned together with a boletus salad, some stuffed zucchini, chicken salad or erbazzone, a local patty based on erbette (wild raw spinach ).

The one who wrote them, logically, asked ‘un po di tutti’. Separate car, then the rest of the first courses arrive, like the capelletti in brodo and the spugnolata, whose recipe has been imitated ad nauseam, but the result is never the same. 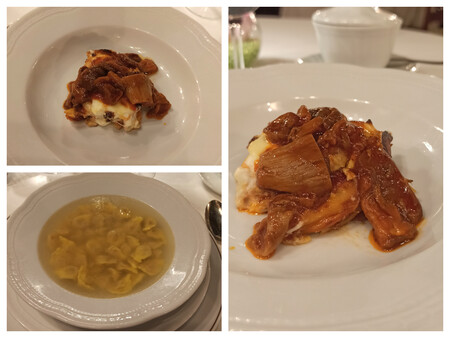 The capelletti in brodo and the spugnolata, a mushroom-based lasagna, are two of the restaurant’s most renowned specialties.

To that pair of signature dishes, as the English call them, the peak moment of any meal in Arnaldo is added, the appearance of the car of stews and roasts. A great moment that comes, how could it be otherwise, assorted with a wide garnish.

Read:  How to change the nickname of contacts in Facebook Messenger

More or less spicy or fresh sauces, fagioli with le cotiche (some very tasty beans), mashed potatoes and French fries, as well as mostard (a mixture of spicy and fruit that is also popular in this part of Italy).

All this as consort of a Cutting of meats that are cut at the moment and in front of the customer, who chooses what he wants to drink. Again, the one who tells you here, took advantage of the situation and asked for ‘un po di tutti’.

Cooked and roasted meats alongside their garnishes, including sauces, mostards, mashed potatoes, fagioli, and French fries.

The fantasy of any Carpanta brought to reality in a measured service, with about a dozen people in the room and another five people leading the rhythm of the kitchen.

Beef tongue, prosciutto, chicken (in three textures), polpettone, tail and veal head and the famous cotechino and zampone (two sausages based on minced and seasoned meat typical of Modena) are part of the landing of the Bolliti di Carne.

Along with it, the portion of roasts. Two options of roast pork loin, on the one hand one with milk and the other with Barolo wine, finish off the re of meats that once at the table the non-Italian diner understands that the local customer only asks for one or the other meat. And also that bet on the house wine, a remarkable red Lambrusco, to soak the agape.

You can take whatever you want from the stew and roast cart, even repeat.

If you survive this moment, you must still reserve a space for dessert. If you do not have enough travel, better focus on the House specialities: the zuppa inglese (a classic dessert of the area) or the pudding della nonna, with the traditional recipe of grandmother Lina.

Sweet and sour onion, fagioli, salad, mashed potatoes and French fries are part of the optional garnish of the meat cart.

Even so, a crostata, creme caramel (flan) or some interesting pears with sabayon they said eat me To reduce the adventure -necessary-, they offer a spazzacamino, a hot digestif with a touch of alcohol that really does the job.

The display in kitchen 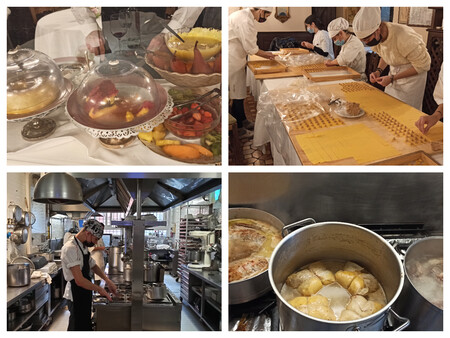 The final step with the dessert cart, making homemade capelleti by hand and the kitchen, where pots dominate the horizon.

More or less every morning, depending on the season, Arnaldo’s workers They make the capelleti by hand that will be served in the different services. A moment of meticulousness and precision in a chain to produce about 40 trays, which last a couple of days, and which are part of that home foundation to which we always return.

Already in the kitchen, Clínica Gastronomica Arnaldo is a bubbling pot frenzy where everything is measured to the millimeter to prepare services that allow the room to flow.

Cooks separately, different types of broth for the cooked ones … Clinica Gastronomica Arnaldo’s stoves smoke first thing in the day, but during the service they relax. Change the third, because it is the moment when the room gives the chest do.

Everything is done at home, or at least they try to make it as homey as possible. “We make the pesto, the capelleti, the saboiardi [bizcochos] for the English zuppa. In fact, we even make our own oil and our own balsamic vinegar “, explains Roberto.

An unprecedented pampering of flavor and textures that, seen from the inside, surprises even more by achieving that a simple cooking elevates the products and does not give the feeling of being a simple boil. “We cook with many broths and the ingredients are top quality. The hen, the pig, the cotechino and the zampone, which are from an artisan from Modena “, he tells us.

In fact, the customer bets mainly on the car of the cooked ones in front of any other. “It is the one that has the most success together with the capelleti and the spugnolata”, he admits. The secret, if it can be called as such, pay attention to the points.

“The most important thing is to know that each meat is cooked. Do not leave it dry, so we are careful with each type of piece and the time it takes,” he tells us. Meanwhile, Roberto gives directions in the kitchen when we say goodbye, where we leave with the resolved doubt that there will be continuity in the Gastronomic Clinic.

His son Riccardo, now in his twenties, will be the fourth generation of these ‘doctors’ of gastronomy that from Rubiera continue to show that their Michelin star looks like the first day.

the rise of the Bitcoin treasury, from December 30 to January 6