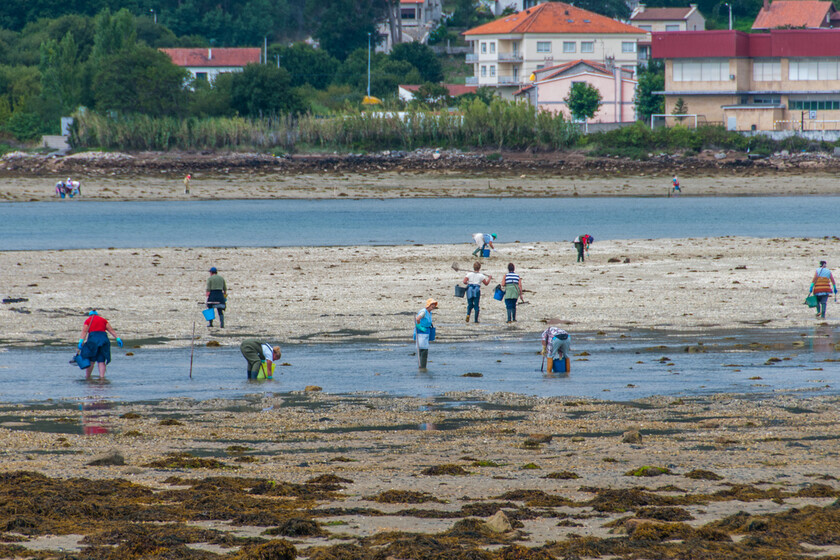 end the fish price speculation through the quota system, equating the retirement rights of shellfish gatherers on foot with that of shellfish gatherers afloat and offering greater protection to other groups, such as netters or packers, are in the inkwell of the Sustainable Fisheries Law project that has already been approved by the Council of Ministers.

The proposal, pending processing and parliamentary approval, would renew the Maritime Fisheries Law, enacted in 2001, and in which there are several assumptions that have already become obsolete.

Most of the text, according to various sources, focuses on the improvements in retirement rights for much of the sector (especially in women) and, above all, in the reallocation of fishing quotas in order to put an end to price speculation.

Equality between men and women

Although theoretically there is no differentiation that prevents men or women from being shellfish gatherers afloat (for example, those who work in rafts) or shellfish gatherers on foot (raking, for example), the reality is that the first task is eminently male, while the second is mainly female.

However, the coefficients for calculating pensions and retirement are different between the former and the latter. This situation generates an inequality that forces ordinary shellfish gatherers to work more to obtain a pension that could be similar to that of afloat shellfishers.

The bill, introduced by louis planes, Minister of Agriculture, Fisheries and Food, puts on the table a new reduction coefficient of 0.15 for different guilds. Among those mentioned, the rederas, the neskatillas or the empacadoras. In addition, the same reduction ratio will apply to shellfishers on foot and shellfishers afloat.

Read:  The seven legumes with the most protein to easily satisfy the body (and 35 recipes to enjoy them)

Although the law is also very oriented towards improving fishing conditions and its sustainability, one of the most ambitious workhorses of the Planas project is in the redistribution of fishing quotas. According to the ministry’s own publication, the law aims to use fishing quotas more efficiently and flexibly.

The government’s claim iseliminate any type of speculation” on the quotas, reallocating after each season the public bodies themselves the fishing rights and the amount of fish per vessel. According to the minister, the defense of “a public good temporarily ceded” to the private sector and a “better attribution” of these quotas.

This rationalization is intended not only to guarantee the legal certainty of the operators – the fishermen – but also a optimization of its use for the days assigned to Spain. This management would try to stop the speculation of the price of the fish already landed, since transmission mechanisms will be created between vessels to comply with the fishing quotas.

Lastly, although the bill is very ambitious and hits many sticks, it is also explained that the new law aims to address the management of recreational fishing in external waters to know its impact both on the economy and on fishing resources.

In DAP | Europe distributes its fishing quotas: which species will we find the cheapest and most expensive next year
In DAP | Can we still eat fish? Aquaculture and sustainable fishing, two possible solutions

How many days does gazpacho (or salmorejo) last in the fridge without spoiling, and how to extend its conservation