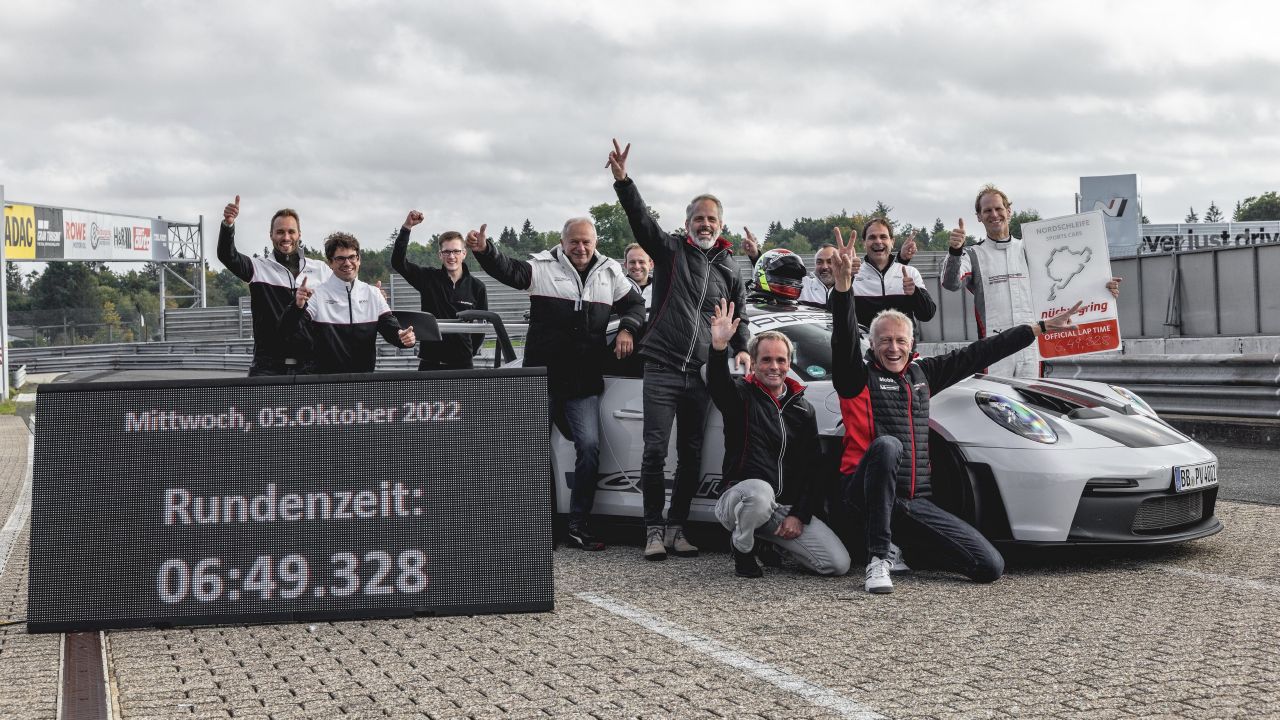 Add and continue. Porsche officially certifies yet another record at the Nürburgring circuit. The new Porsche 911 GT3 RS stops the clock in 6:49.328 minutes in the almost 21 kilometers of the Nordschleife route, thanks to an overwhelming 525 CV of the sports car approved for street.

It has been a year and a half since the new Porsche 911 GT3 was presented, and it has already shown that it was much faster than its predecessor. Then, he achieved a record on the northern layout of the circuit of Nurburgring stopping the stopwatch just before 7 minutes, with a notarized time of 06:59.927. He was the first to put in his windows the new generation of 992.

Because just six months ago the second trophy was added with the special preparation of Manthey Racing. The package specially prepared by this competition specialist of the German brand aboard the new 911 GT3, achieved a time of 06:55.2 minutes. A time that has been surpassed again for the most radical version of the 911 to date, a sports car with a brutal design and performance, with competition genes and with street homologation such as the new Porsche 911 GT3RS.

The Porsche 911 GT3 RS unleashes the madness in the brand

The best argument to convince customers that the new 911 GT3 RS is a guarantee of wild sensations and a perfect choice over its competitors. The 911 GT3 RS has a powerful boxer six-cylinder petrol engine and 4.0 liters that, without any supercharging, achieves a maximum power of 525 CV. The cavalry moves to the asphalt through the rear wheels, and dosed through the seven-speed PDK automatic transmission.

Read:  Red Bull denies that the purchase of 50% of its shares by Porsche is finalized

But the unit that has achieved the new record was not so simple, as it had the help of the “Weissach” option package, which means that it had the exclusive tires Michelin Pilot Sport Cup 2 R in sizes 275/35 R 20 at the front and 335/30 R21 at the rear. A configuration with which it is capable of reaching a top speed of 296 km/h. But almost touching this limit, at 285 km/h, it generates an aerodynamic load that reaches 860 kilogramsthree times more than a 911 GT3.

Porsche 911 GT3 RS, the Weissach beast to reign among supercars

With this configuration, the 911 GT3 RS set a time of just 6:44.848 minutes in a shorter lap of the 20.8 kilometers it was supposed to cover. Ultimately, where it has been tested hundreds of times during its prototype stage, it managed to set a new brand of 6:49,328 minutes. A whopping 10.6 seconds faster than the current 911 GT3. Now, the goal is for customers interested in this version to spend the 265,404 euros What does it cost in Spain?

Audience record that talks about us