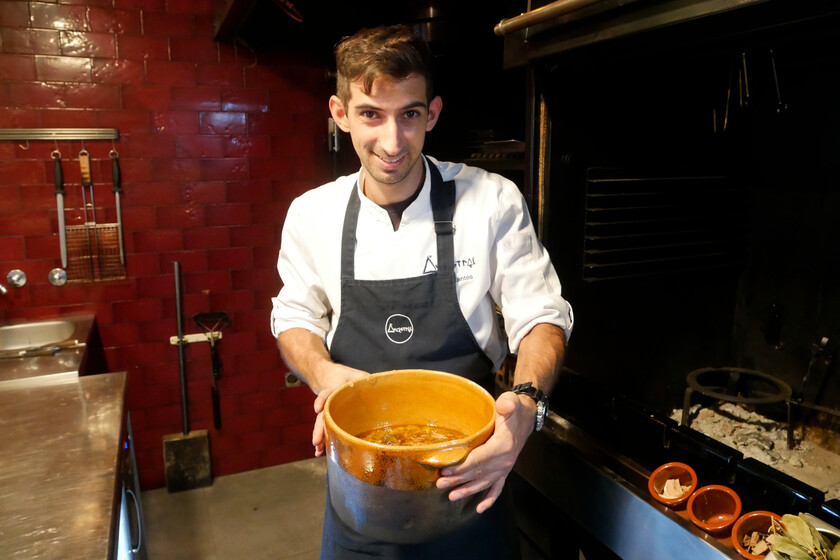 The Cook Victor Infantes It was on Tuesday like a flan. They had invited him to the Michelin Gala and, although his restaurant sounded like it was going to win the star, you didn’t have them all with you: “With the path we’re taking, I did think it would lead us to something good, but not so fast. And since this year everyone from Castilla la Mancha We were not clear at all.”

But, finally, Ancestral won a Michelin star, the second for the town of Illescas, where it is also located the bohío, by television chef Pepe Rodríguez. A circumstance that is surprising for a municipality without any tourist attraction whose only advantage is being located halfway between Madrid and Toledo.

Infantes admits it: he settled there just because rents were cheap. After getting the Michelin star as head chef at Clos, in Madrid – owned by the multi-star waiter Marcos Granda–, he decided to mount it on his own. first with Aleñoan open grill in the middle of a pandemic, with which to save the day before embarking on his real project: Ancestral, an ambitious gastronomic, with a radical approach.

“We wanted to claim something that was unique, that was not done,” explains Infantes to DAP. “We were developing the fire and the ember with ancient techniques, especially Castilian-Manchegan. The clay, the iron frying pan, the wrought iron… It went very well with the kitchen that I have, deep in depth, and the use of products from La Mancha, which is more humble than in the rest of Spain”.

The rebirth of Manchegan cuisine

Although Infantes was born in Madrid and continues to live in the capital, his family is from Source the Fresno (Ciudad Real), where he sucked the porridge and all the cuisine of La Mancha. But his is not yet another reinterpretation of the classic recipe book from this area of ​​Spain that until now had been a gastronomic wasteland.

In the year in which the gala was held in Castilla-La Macha, the Michelin Guide awarded three restaurants which, from their peculiar vision of gastronomy, have been a revulsive for the scene from La Mancha: Ababol, in Albacete; Oba-, in Casas-Ibáñez (Albacete); and the Ancient One himself.

The excellent garlic soup is served with toasted black bread with an emulsion of Pedroñeras garlic.

The three restaurants share the use of local products: river fish, lots of game and homemade preserves. But there their similarities end. In the case of Ancestral, everything revolves around its peculiar use of the ember.

“Cooking with clay is complicated, it has nothing to do with times and degrees,” explains Infantes. “You have to feel a little what you are cooking, pay close attention, try a lot and keep a very slow fire. But some stews are obtained with a concentration of flavor and a very good delicacy”.

The grilled kid sweetbreads are one of the most product-focused dishes, although they are accompanied by a cauliflower cream and a citrus demi glace.

Read:  Six molds to make homemade chocolates and have a sweet bite at hand whenever we feel like it

A surprising menu for its controlled forcefulness

Ancient shines in the spoon dishes. We especially liked their interpretations of the garlic soup and the stew of lamb’s trotters, with Castilian chickpeas, which is accompanied by a pig’s ear in Manchego marinade, buffed and smoked. A delight.

“All the techniques we use come from mud and smoke, but the defatting changes, the filtering of the broths, the concentration of flavors…”, explains Infantes. “And we use mixed techniques, maybe we do something in a vacuum that is already smoked and we end up on coals.”

The best dish on the menu is this trotter stew with Castilian chickpea, which is accompanied by a stewed and smoked pig’s ear with Manchego marinade.

This is very noticeable in a menu with dishes that are usually very heavy, but that in Ancestral they don’t end with your stomach in pieces. As in any gastronomic restaurant, one ends up eating wanting to take a nap, but to have gobbled up sweetbreads, kid, trotters, frog legs or eel, one comes out quite well off.

“We want the proposal to be harmonica, that it does not have too much smoke, nor too little”, explains Infantes. To the pleasantness of the experience, in addition to the degreasing, the room, run by Giovanni Heras, helps a lot; a “a bit classic” maitre d’, in the words of Infantes, who likes the first time.

Seafood is not served at Ancestral. The fish and shellfish are from the river, like this crayfish with kale cream. Very tasty.

“Have very close and in the end what he wants is to have a warm, comfortable room, in which he feels comfortable”, explains Infante.

The day we went to eat, a Thursday at noon, we were the only diners, but surely this changes from today. “Half an hour after they gave us the star, we had 140 messages in the reservation search engine,” explains Infantes. “It was instant.”

To top it off, kid roasted in a wood oven, its juice and date and hazelnut ravioli.

The future looks good for Ancestral and Infantes have no intention of resting on their laurels. “I already had the experience with Clos Madrid and there I did notice much more pressure, I assimilated stress in a different way,” concludes the chef. “What I have is above all the desire to continue demonstrating what we do, to continue cooking, synthesizing the ideas that we have and take them along a specific path that expresses the kitchen well. And get as high as we can.”

What to ask for: Ancestral has two menus, very affordable for what is already a Michelin star, which are still valid for now. Esencia, with 9 passes, plus appetizers and desserts (€80), and Origin, a somewhat shorter version, with 6 passes (€60).

In DAP | From jam and mortar to Michelin stars: the new era of Castilian-La Mancha cuisine
In DAP | These are the two new Michelin star restaurants where you can eat for 50 euros or less