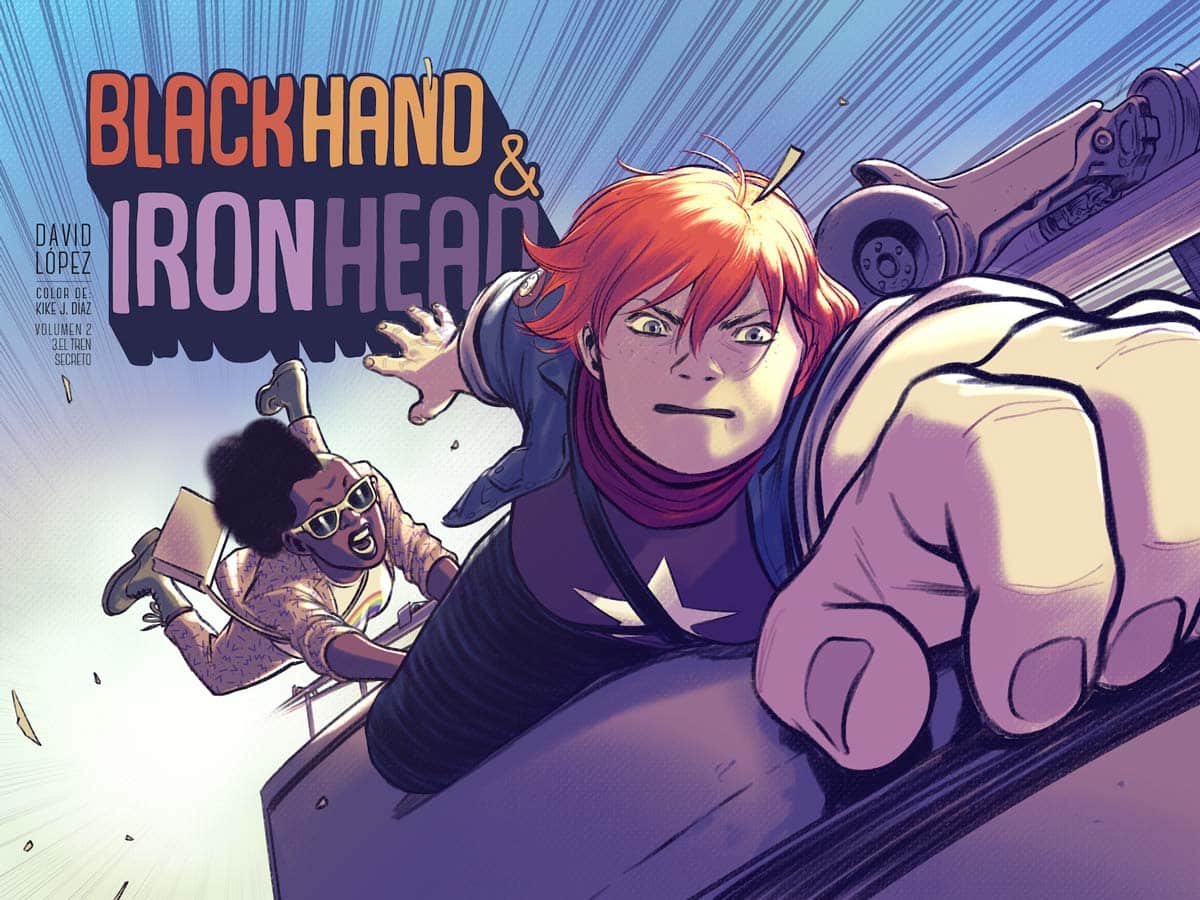 The Aragonese cartoonist David López publishes the new installment of his comic BlackHand & IronHead, in Spanish and… free!

This new installment is already available on the website of the digital publisher Syndicate panel, and can be downloaded for free or for the price that each reader wants, as happened with the previous installments of the saga, best-selling in their paper editions in countries such as Spain, the United States, Italy or France.

David López is an internationally recognized artist thanks to his work since 2002 for the Marvel and DC Comics majors, in collections como X-Men, Batman, Catwoman, Captain Marvel or Spiderman, among others. The author presents in this series for the youngest, and also those who are not so much, the new adventures of superhero Alexia (IronHead) and her supervillain sister, Amy (BlackHand).

The story is based on two female personalities away from the clichés of traditional superhero comics, and deals with themes such as diversity, adolescence, the value of friendship and family and generational conflicts, in a fresh, explosive tone at times. and, without a doubt, with a great load of humor.

This new installment consists of 6 episodes and its synopsis reads like this:

“After the death of their father, the sisters inherited a foundation that kept order in the world of superheroes, but it was full of corruption and lies so they chose to burn it to the ground. That was not a very popular idea and now everyone is going for them, including the main candidate for the presidency, a brute named King Gladiator.

If the sisters want to get out of this, they will have to ally and take the initiative, or they will literally slice their brains out. “

Below you can see a preview of this new installment

Read:  Tarantino banned Christoph Waltz from going to rehearsals for 'Inglourious Basterds' so that Hans Landa would impact the cast more on set

David López is a Spanish cartoonist, graduated in illustration from the School of Art of Zaragoza in 1996, who since 2002 works for the most powerful comic companies on the planet, highlighting his work for Kodansha, DC Comics and Marvel, in bestselling series such as the one taken to the movies Captain Marvel, X-Men, Batman, Catwoman, Deadpool, etc., as well as his own work, in which the saga of Blackhand & Ironhead.

In 1996 he began to publish comics in various fanzines, making the leap to professionalism just two years later with Espiral (1998), published in the Brut collection of La Cúpula publishing house.

From the year 2000 he began to work for the great American publishers, first at Marvel and then at DC Comics where he would establish himself with titles such as Fallen Angel (2002), co-created with Peter David and, even stronger, with Catwoman (2004) , which draws continuously for no less than 30 installments, breaking records.

In 2008 he returned to Marvel with a closer collaboration; in Avengers: The Reunion (2008), where he brought the love of the leading superheroes to Zaragoza, and continued in the editorial drawing for some of his header series: X-Men, Spider-Man or Guardians of the Galaxy.

His most media contribution to Marvelian mythology has been his work in Captain Marvel (2014) with screenwriter Kelly Sue de Connick, a work that inspired the 2019 film based on that same character.
It’s with BlackHand & IronHead (2017) when he rewrites his own creations. This graphic novel was edited by installments on Panel Syndicate, in digital format, and published on paper in Panini Italia (2018), Astiberri (2019) in Spain, Dargaud (2019) in France and Image (2020) in the United States.