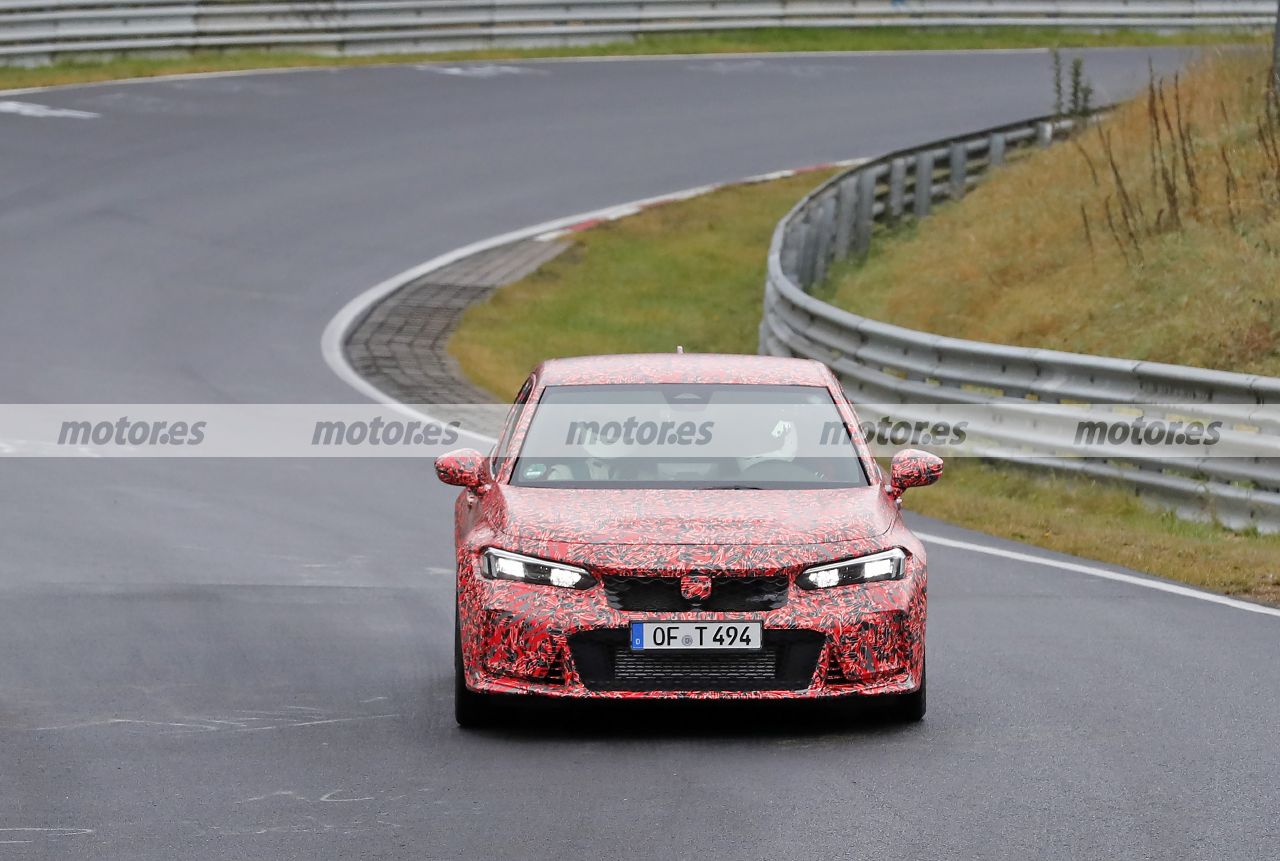 It has taken but finally we have been able to see it. One of the prototypes of the new Honda Civic Type R 2023 that has been showing itself around the Nürburgring circuit has decided to step on the asphalt of the German track. Some spy photos that show the compact sports car practically in a reconnaissance lap.

The next days should be key in the development and fine-tuning of the new Honda Civic Type R 2023Well, after a few days riding quietly on the roads surrounding the Nürburgring circuit, the sportier version has decided to enter the German track, as you can see in these new spy photos. However, they have not done it as we would have liked to see it.

To the limit, showing what he can do on a track like the German one. Only one lap was given by the Honda technicians, disappearing and returning to the workshops that the Japanese brand has in the vicinity of the circuit. And it is that the day was rainy, one of the reasons that invite to think that the team of engineers responsible for the Type R waited for better weather to wake up the new Japanese beast that will hit the market in 2023, losing all the camouflage that dresses the body of the new model.

The new Honda Civic Type R barely accumulates a little more than a year and a half in development, a short period of time that the Japanese brand will extend to almost two years to ensure perfect operation and performance of benefits under any circumstance. There is even talk that the firm may be looking for a new record on the German track, a milestone for a sports car that will be the last generation of combustion.

Read:  Germans consider electric as combustion when buying a car

The Civic Type R will be presented with a brutal aesthetic as it has always been characterized, with large grills on the front with a honeycomb mesh painted in black, generous air intakes on the sides of the front bumper and some aggressive open gills on the hood panel to evacuate the heat generated by the engine. With Brembo brakes and lowered suspension, the Civic Type R will also boast top-notch aerodynamics with a large rear spoiler that will grab as much attention as its three central exhausts.

The new top-of-the-range Honda Civic will re-assemble the powerful turbocharged engine from four cylinders and 2.0 liters VTEC with a maximum power that will touch the 330 CV, and without any electrified assistance. The Japanese have full confidence in this engine, and in this mechanical configuration, meeting stringent emission standards. In addition, the Civic Type R will be a real sports car, thanks to its six-speed manual transmission.

Adoption leads to innovation and use of technology