The mythological creatures of Spanish folklore, illustrated in a fascinating map

By EzraSeptember 18, 2022No Comments3 Mins Read 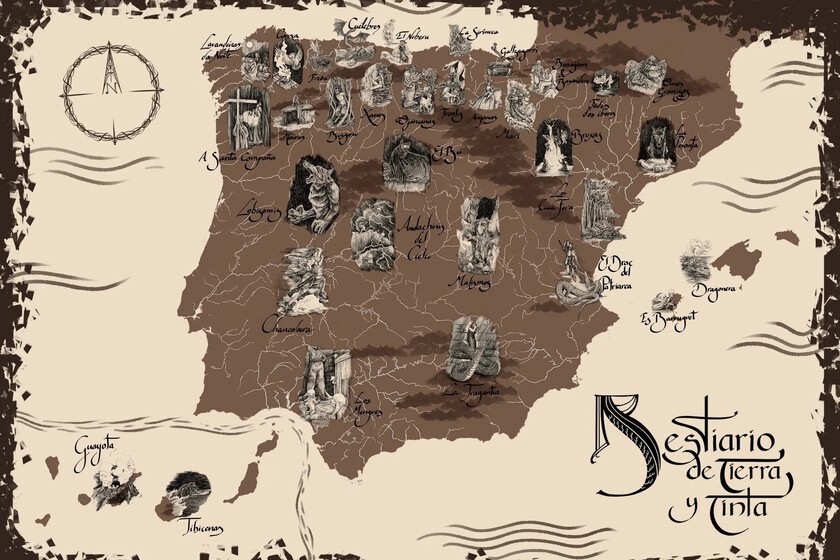 Two years ago, at Magnet we published an imaginative map of the world illustrated with the different mythological creatures with which each country is identified. Spain was represented by “El Coco”, the mythological being typical of the comics that parents tell their children at night before going to bed: “Be good or El Coco will come”. Equally or more interesting is the map brought to us by Clara Dies Valls, illustrator of the Bestiary of earth and ink with all the monsters and creatures that live in our folklore.

Actually, Dies never planned to create this map. It all started with a challenge on social networks between artists to make an illustration of a mythological monster from their area. This is how she began a fascinating task of research, documentation and compilation that led her to discover popular legends of our country. And what is better, that is how a long-term project was forged that ended in a beautiful illustrated album.

With all the material collected, the illustrator made an effort not only to draw those enigmatic creaturesbut in providing a small explanation next to each one of them giving life to a work that she herself was in charge of editing, laying out, illustrating, and writing with the help of a campaign of crowdfunding who helped him pay for the project.

From winged serpents to Wolfmanthe peninsula boasts a fantastic collection of urban legends that have been passed down for generations in communities such as Valencia, Asturias, Cantabria or Seville.


On the map you can see beings as mysterious as “Nuberu”, a magician who controlled the rain in Asturias or “la Pesanta”, a representation of sleep paralysis in the form of an evil dog. It can also be seen “The Drac of the Patriarch”a fantasy dragon that terrified the Valencian populations or “el Cuélebre”, the Asturian winged serpent whose function was to watch over treasures.

Read:  What will the Hogwarts Legacy map look like?

“El Ojáncano” could not be missing, a one-eyed giant that feeds on acorns in Cantabria or “the Galtzagorri”, tiny and cumbersome beings, in red pants, who help humans, according to Basque legends. The Lobisome even appears, the lycanthrope from Extremadura that terrified so many children in the region.

“Sometimes the legends they were used to disguise deities and save them from the control of the Church, sometimes simply to get the children to bed early. They give us another perspective of the area where they originate and, in turn, knowing these places helps us better understand their legends,” Dies explained in this interview with Traveler.