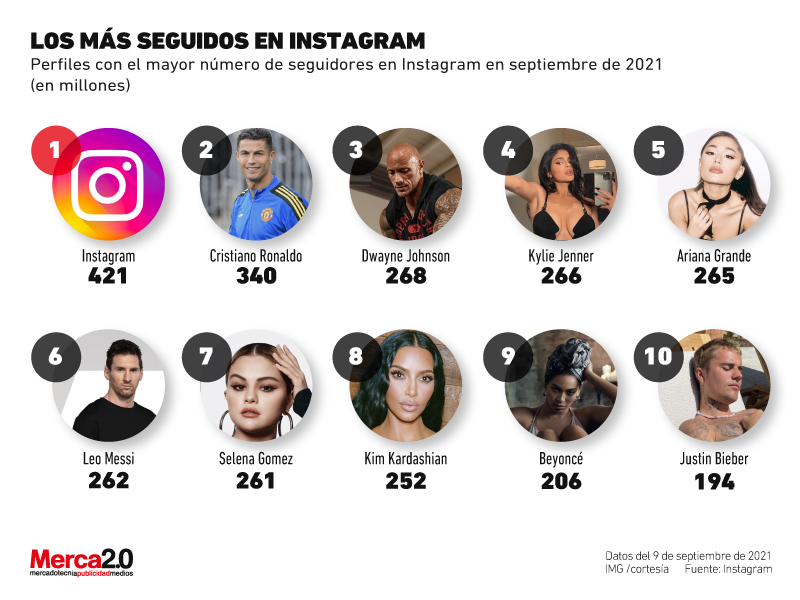 In today’s graph we present the Instagram personalities (singers, athletes, among others) who have the most followers.

Today, social networks are much more than simple spaces for social interaction; now, they are powerful platforms that are capable of positioning brands and increasing their sales.

By more we not only refer to Nike, Adidas, Dior, etc., but also to those personalities from the world of entertainment, sports and music, among others, who have in their networks a large niche of followers who, in their opinion time, they become potential consumers.

In other words, a person who has millions of followers on Instagram is undoubtedly a great showcase for brands, as their reach is immense.

As we know, the arrival of the pandemic caused social networks to experience an important situation, a situation that several users took advantage of to gain more followers.

Currently, Instagram has more than 1,200 million active monthly users, this according to data from Statista, and, in fact, the Instagram profile is the one with the largest number of followers, with 421 million.

Outside of that, speaking of personalities and as we can see in the graph posted above, the one who has the most followers on Instagram is the soccer player Cristiano Ronaldo, who has 340 million followers.

They are followed by Dwayne Johnson with 268 million, Kylie Jenner with 266 million, Ariana Grande with 265 million, Argentine Lionel Messi with 262 million and Selena Gomez with 261 million followers.

Undoubtedly, these numbers speak of the great popularity enjoyed by these personalities, which, in turn, represents a great commercial window for the brands they work with.

In fact, many of those that appear in this ranking have broken records for the highest number of likes received in a single publication. To mention an example, a single photo of Ariana Grande achieved the amount of 26.7 million likes.

In addition to those we mentioned, other personalities that add to the list of the most followed on Instagram are Kim Kardashian with 252 million followers, Beyoncé with 206 million and Justin Bieber with 194 million.

Stimulate your child’s memory with these foods