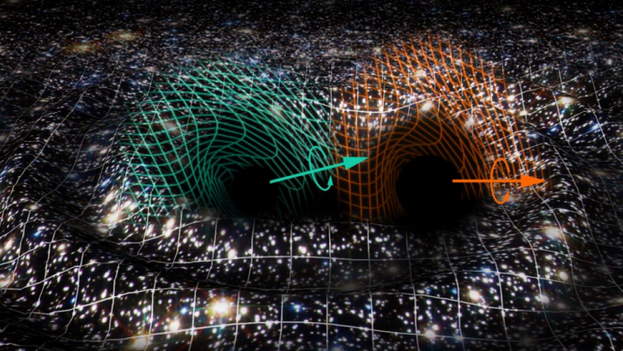 Both the primary components and the remnant are in a higher mass range than has been observed to date, and the resulting black hole is the most massive gravitational wave ever detected.

This finding has been the result of 15 months of work by two large scientific collaborations (Virgo in Italy and LIGO in the USA) that have had hundreds of experts from different countries, including Spanish participation.

The results obtained, as well as their scientific implications, have just been released in two articles published in the journals Physical Review Letters and Astrophysical Journal Letters .

This detection opens the door to discovering many more possible new astrophysical effects.

The massive binary system has been christened GW190521 – since the gravitational wave event was perceived on May 21, 2019 -.

That the record for mass detected by the Virgo and LIGO collaborations has been broken is an unprecedented discovery. “This detection opens the door to discover many more possible new astrophysical effects”, anticipates Thomas Dent, coordinator of the gravitational waves program at the Galician Institute of High Energy Physics (IGFAE) and member of the LIGO Scientific Collaboration.

Crucially, the remaining black hole is of intermediate mass, and this is related to one of the most fascinating and complex puzzles in astrophysics and cosmology: the origin of supermassive black holes.

These giant monsters, millions to billions of times more massive than the Sun and often in the center of galaxies, could arise from the merger of smaller intermediate mass black holes.

“There must be mechanisms that we do not understand and that allow the generation of black holes with higher solar masses, such as supernovae,” explains researcher Alicia Sintes, from the University of the Balearic Islands (UIB) and member of LIGO, to SINC.

“If they arose from the collapse of stars, they are in a mass range in which their presence is considered, in theory, impossible

Until this September 2, very few candidates of this type have been identified solely through electromagnetic observations and this is the first observation via gravitational waves. Furthermore, the range of 100 to 1,000 solar masses has for many years represented a desert of black holes.

One of the mysteries of the new find is the origin of the two parent black holes. “If they arose from the collapse of stars, they are in a mass range in which their presence is considered, in theory, impossible,” explains Dent.

“Therefore, it could help improve our understanding of the final stages of the life of massive stars,” he predicts. If they can know and understand it, they could find out what is the origin of supermassive black holes, one of the most complex puzzles in astrophysics and cosmology.