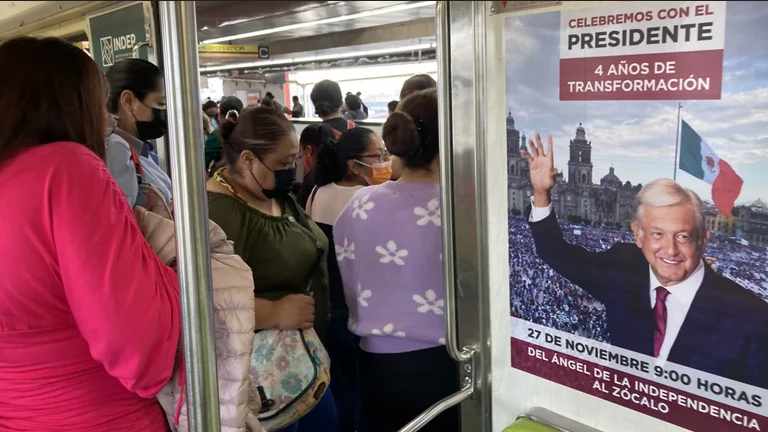 In the last hours, the digital conversation has revolved around the march called by President Andrés Manuel López Obrador (AMLO) with the intention of “celebrating” his four years of Fourth Transformation (4T); However, this convening strategy has generated many doubts due to its similarity in discursive, communicative, associative and contextual terms with the Government of former President López Portillo.

The march on November 27 was raised as a response to the so-called opposition and the march in defense of the INE, which brought together a large number of Mexicans (a number that by the way was not clarified, but between 16,000 and 200,000 people are spoken ).

Although AMLO has pointed out on several occasions that this march is not intended to attract “carried”, ironizing the way in which in some marches trucks and “kits” are presumably delivered in support of certain political ideologies, the truth is that a large part One of its media strategy has consisted of promoting a “celebration of the Mexican people”, in which many assure resources from the public treasury will be allocated.

According to journalist Darío Celis, the projection of the cost of the president’s “counter-march” would be approximately 1.5 billion pesos.

If this doesn’t sound familiar, let’s go back to the September 2, 1982when the current President, José López Portillo, called for a march in support of his decision to nationalize the private banks, bidding farewell to “the poor and dispossessed, due to the difficult situation the country was going through” with applause and tears.

“I do not come here to sell lost paradises, nor to seek historical indulgences […] telling the truth, mine, is my obligation, but also my right […]. I am responsible for the rudder, but not for the storm […] I have consequently issued two decrees, one, the country’s private banks are nationalized […] to the dispossessed and marginalized, to whom six years ago I asked for a pardon”.

This is what is heard in the fragments of his speech, where between tears and blows to the table, the former president said goodbye admitting his failure. Today, during “La Mañanera”, President AMLO stressed that it was during the administration of López Portillo that the problem of the nationalization of the banks has taken six-year terms to be reversed.

The similarities between the situations of the two “López” are many. Based on what some opinion leaders mention as Carlos Loret de Molawho has also been labeled as one of the opposition leaders by AMLO himself, points out that the President has returned to his old attention formula, where he shows that no one has a greater convening capacity than him, with the difference that currently You have all the resources at your disposal.

Read:  DC prepares a prequel to Superman, without Henry Cavill as the protagonist

Precisely, the “celebration” of his four years is very reminiscent of what was seen prior to the last march of López Portillo, something that of course did not go unnoticed by the most attentive on social networks.

This is the poster asking to attend the march led by López Portillo:

This is AMLO’s poster:

Which by the way, it would be worth noting that there has been a whole issue to consider regarding advertising in areas such as the subway. The President pointed out on several occasions that people do not always stay informed, which is why he has asked to “spread the word.” As a result of these “indications”, posters like the one shown began to appear in the facilities of the CDMX Metro Collective Transportation System.

For its part, the Metro Union distanced itself from any accusation for the publicity that was placed inside its facilities in favor of the 4T march. According to these, ISA Corporativo would have been the company that has been granted the concession for the Metro advertising environment, through a Temporary Revocable Administrative Permit, which also obtained the approval of Rosario Granado, Metro User Service Manager, so his staff was in charge of placing the advertising.

In both cases, the constant is the mobilization and allocation of advertising resources in an initiative outside the agenda of the President and his cabinet, which would perhaps be the equivalent of “frutsis” and “tortas”, if the comparison is possible. And even without having indicated everything, the media and the opposition reported some documents where supposedly the Unión Tepito and Indeporte are “carrying” and threatening people to attend the march.

I refer to the tests👇

They force merchants to go to the counter march, which is actually a parade.#AmloAcarreoFest pic.twitter.com/5k9ltno4JX

Both marches were planned at a time when popular opinion is strongly confused: on the one hand, the final movements of López Portillo and the general discontent and, on the other, the Electoral Reform with which AMLO would plan to reform the INEC.

As for the speech, there are almost textual similarities. The President has reinforced his position since his Fourth Government Report with which he points out that racism, classism and abandonment to the countryside have been an important part of his position, even since his presidential campaign.

Despite the fact that López Portillo kept all the attention of his economy on oil, he also maintained the discourse of helping the poor, a fact for which he was “fractured” at the end of his six-year term. However, there could be a tangible difference between the two: while López Portillo admitted having failed the Mexicans, it seems at this point difficult for AMLO to retract any of the opposition’s accusations.

The filmmaker Guillermo del Toro recently pointed out, although in a different context, “we survived the six-year term of López Portillo, but this is unprecedented.” For many users, this phrase has been capitalized to point out the mimicry between the two leaders.

Sites and bars in Qatar; historical implications of football