Bullfrag
Home Technology The latest build of Windows 11 is offering an error message on... 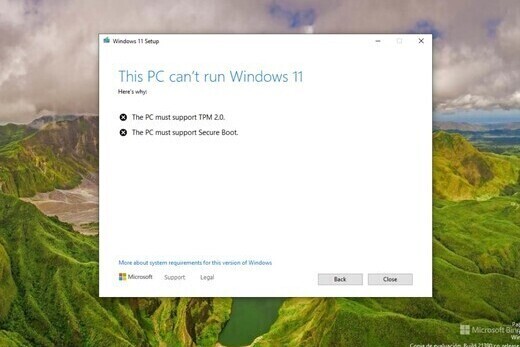 One of the complaints from users when Windows 11 was announced was the certain requirements that teams should meet who want to install the new operating system. There were rumors about a possible reduction in the requirements, something that seems that it will not be the case.

Microsoft has released build 22458 a few hours ago on the Dev Channel for Windows 11 and there are Twitter users what do they warn about a message that your computer does not meet the requirements to install Windows 11, not even on a virtual machine.

TPM 2.0 also in the latest Build

⚠️Upgrading to 22458 from 22454 in a VM requires TPM. This hasn’t been the case so far in Windows 11’s development. pic.twitter.com/XygljvroFQ

In order to install Windows 11 the star requirement is that the computer must have a TPM 2.0 module. A component that is also required so that virtual machines can install the latest build of Windows 11.

When trying to update to the latest version of Windows 11 with build 22458, some users are seeing a message appear stating that they cannot install it since the computer does not have the TPM 2.0 chip.

Remember that although Microsoft said that Unsupported computers could install Windows 11 and continue in the Insider Program, they also warned that these would not have new security updates.

It will be necessary to see if with later compilations there are changes in this regard and the message stops appearing when trying to install the new Builds that are coming to the market.