The International Space Station will have its own movie studio 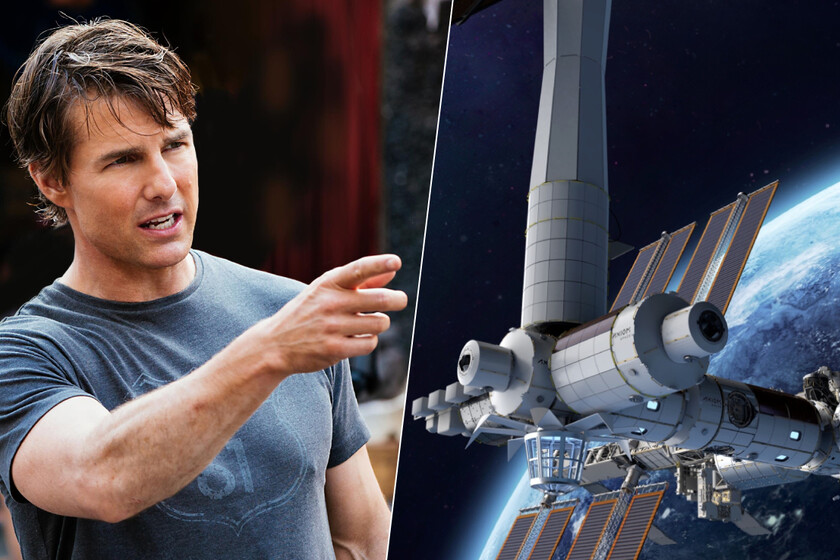 Even though movies set in space are a staple of the industry, logistical and financial barriers have always meant that creative departments and special effects teams had to do the dirty work to help audiences get rid of the disbelief. Recent attempts to recreate zero gravity and the claustrophobia of space have borne fruit with titles like interstellar or first-man. And years of research and effort and million-dollar innovations were also behind us “believing” the weightlessness of Sandra Bullock and George Clooney in Gravity.

Up to now. The next step for us to take was to go directly into space to record. And for that, the human being will build a studio there.

The SEE-1 module. This is how the Axiom device that will be at the service of the British studio Space Entertainment Enterprise has been called. They will be “the world’s first content and entertainment studios and multi-purpose arena in space.” It is an inflatable module, according to Axiom, which will have a diameter of almost 7 meters. The use of inflatable modules is an increasingly popular approach by private companies developing space stations to build large living areas, due to the advantage of launching smaller and then expanding to a larger volume once in space.

And Axiom has an agreement with NASA to attach at least one of the modules of its future space station to the ISS. So the idea is not so far-fetched. The company will then build the space station before finally separating it from the ISS in 2028 and making it a free station.

studies in orbit. Specifically, the ship will be available to people who want to film or broadcast live content in space, “including movies, television, music and sporting events.” A concert in space? Why not. Videos and images of the SEE-1 on the company’s website show the module as a giant white sphere, though no designs of what the interior will look like are yet available.

They also haven’t provided estimated costs or budgets for the project, nor do they detail how much they would charge others to use the studio. But since it is a shooting set in orbit, we cannot expect it to be exactly cheap.

It could only be Tom Cruise. Because he made 13,000 jumps on a motorcycle to record Mission Impossible 7. Because you don’t need stuntmen for stunts. Because a plane was hung with a rope while it was taking off and rose 1,500 meters. Only he is capable of skydiving 500 hours for a scene or jumping off a cliff on a motorcycle. Oh, we can’t forget that time he climbed the tallest building in the world, the Burj Khalifa in Dubai. Tom had one more thing to add to his collection of “moments when I risked my life to make a movie”: go to space.

Before and after the digital effects were removed on MISSION: IMPOSSIBLE – ROGUE NATION. Tom Cruise was really dangling on a plane 5000ft in the air, attached by one strap. pic.twitter.com/dehUrbCgDe

A space adventure for Tom. In 2020, NASA announced that it was working with the famous actor to send him to the International Space Station to film a project. The actor’s journey into space was to take place in SpaceX’s Crew Dragon capsule, which is used to transport NASA astronauts to and from the ISS. Later, NASA confirmed that Axiom would participate in putting Tom Cruise into orbit. As for what Cruise plans to film in the cosmos, all that’s been said so far is that director Doug Liman is involved and that the movie won’t be a Mission: Impossible installment (thank goodness).

The company is looking for investors for Cruise’s space project, which Deadline estimates at 200 million euros. However, the budget may be even higher, given the cost of leaving Earth. Just one seat on SpaceX’s Crew Dragon costs about $55 million, plus NASA charges additional fees for private astronauts using its facilities while in orbit.

It won’t be the first. A few months ago, a Russian film crew successfully flew to the ISS in early October for a 12-day shoot for the movie The Challenge. The film, about a surgeon who has to operate on a sick cosmonaut in space because his medical condition prevents him from returning to Earth for treatment, is scheduled for release later this year.

Although documentaries featuring footage shot by astronauts are now commonplace, and live television broadcasting took a big step forward with the Apollo moon landings, only modest attempts have been made to film fiction beyond the final frontier. In 2008, Richard Garriott made a seven-minute short film called Apogee of Fear, which features the acting debuts of several bewildered astronauts. Also some scenes from the 1984 Soviet film Return from Orbit they were shot in space. The next will be, finally, our beloved Tom Cruise.