By HarleyKaiaOctober 19, 2022No Comments3 Mins Read 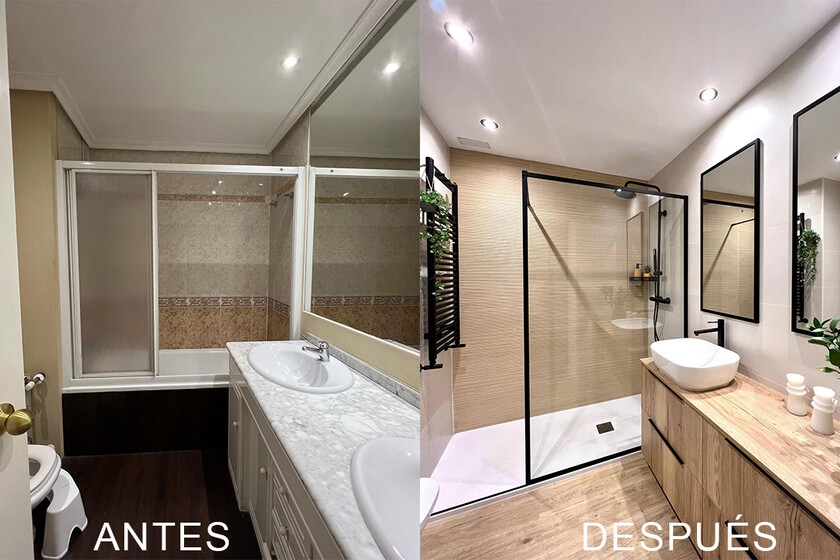 After the reform this bathroom it has become a spacious space that practices warmth and calm.

The adjectives warm or cozy were not usually associated with bathrooms that always sought the functionality of cold tiles and, incidentally, conveyed a great impression of cleanliness. But, since well-treated wood or its (increasingly better) imitations have reached bathrooms, they can also be an aesthetic continuation of other spaces in the house and transmit new and warm sensations.

This is the case of the transformation of this bathroom whose reform has been the work of Ana Lorenzana, from Decoryver Even though expert in reforms without works, In this case, at the request of the clients, there has been a change of tiles and toilets.

The bathroom before renovation it had undergone partial reforms so different finishes were mixed in it on the walls and different styles in its furniture. He even had sapelli finish wood flooring, very dark. Despite its generous size, the mixture of styles and periods gave rise to a chaotic space without much aesthetic coherence.

Before the reform the bathroom had four pieces. The toilet shared space with the bidet on a very “stuffy” wall that included the radiator.

The bathroom after the renovation

In this case, the reform has included new toilets, tiles and only the floor has been maintained, although on it, a nice water-repellent laminate with an oak wood finish, the same that the whole house now enjoys.

Timber is the protagonist in the new bathroom It occupies the same large space as the previous one. Instead of two sinks, only one has been placed off-centre, a trend that makes the most of the countertop.

In addition to the sink and the floor, the shower wall has been fitted with a ceramic coating wood finish in palilleria, another trend detail that transforms the bathroom into a very contemporary space.

Read:  Timberland's mid-calf boots that are so comfortable and cool for fall you'll want to wear them now thanks to the end-of-season sales

Instead of the bathtub, the bathroom now has a large shower, and instead of two pieces, the bidet has been dispensed with. Part of its space is now occupied by a practical shallow vertical cabinet but a lot of height and in which wood is also the protagonist.

As a counterpoint to the wood and the warmth of beige, accessories in black they add a note of contrast and sophistication in the beautiful new bathroom.

Shower shelf without drilling for bathroom corner in black for 14.99 euros

Fixed shower screen made of 8mm tempered glass and anti-limescale treatment and 195cm high with a 70cm matte black frame for 242.00 euros

Why is Ark’s Cathie Wood still investing in Bitcoin?

Disaster Looms For Digital Currency Group Thanks To Regulators And Whales