The IMF tells El Salvador to choose: bitcoin or loan 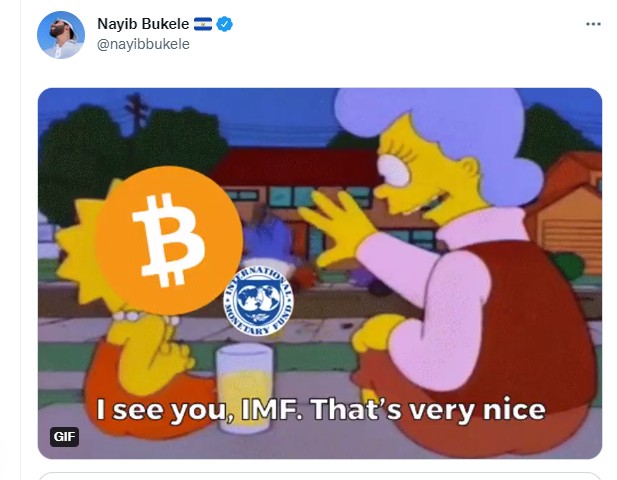 When in 2021 El Salvador adopted bitcoin as a new legal tender, many warned that there would be problems.

The first complications occurred since the end of last year, when the value of the mother cryptocurrency began a persistent downward trend that still continues.

The new problem for the communion between El Salvador and bitcoin is another: it is called the International Monetary Fund (IMF).

That’s right, the credit institution made up of a large number of countries but de facto dominated by the United States, issued a warning to the country that Nayib Bukele governs: if the idea of ​​adopting bitcoin persists, there will be no loans.

This is not good for El Salvador, since a year ago it had started talks to obtain a credit of 1,350 million dollars with the aim of strengthen its battered economy.

Although that payment seemed assured, now, with bitcoin in between, everything has become complicated.

The financial body has not welcomed the entry of cryptocurrency into the country’s economy, warning that it facilitates money laundering and the financing of terrorism.

The problem is that taking into account the purchase values ​​and the current price, it seems that the country has lost around 20 million dollars.

Bukele, president of El Salvador and fan of bitcoin, mocks the IMF

Nayib Bukele, standing in the middle between a president of a country and an enthusiastic crypto influencer, continues to give advice on how to invest in digital assets and has not been traumatized by the IMF warning.

What’s more, he has even made fun of the fall in the price of bitcoin by changing his profile photo to that of an employee of a McDonald’s fast food chain.

In its latest statement, the Fund demanded that El Salvador “reduce the scope of the bitcoin law by eliminating the status of legal tender.”

The response of the president of El Salvador on Jack Dorsey’s social network was a meme from The Simpsons in which the IMF is Homer trying to draw attention to the bitcoin issue.