The IMF does not show a promising future for 2022 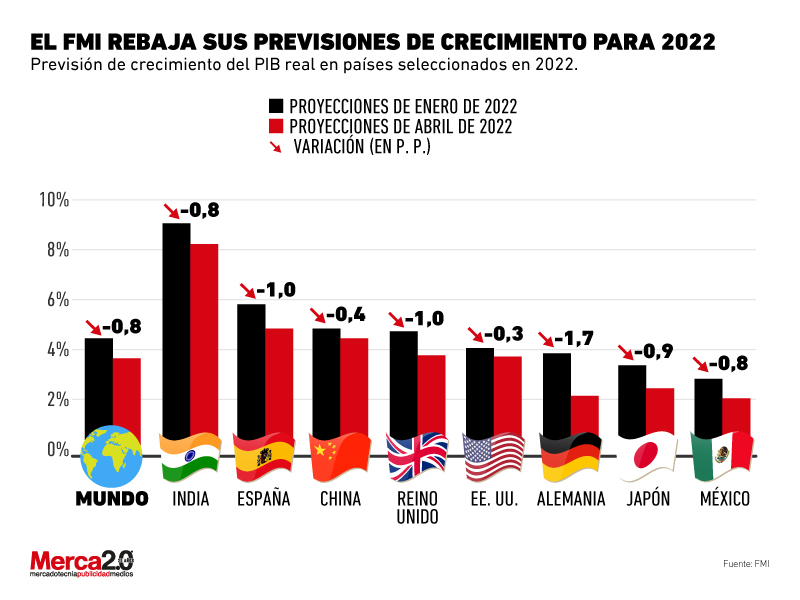 The International Monetary Fund (IMF) has an unfavorable growth forecast for 2022.

Although multiculturalism, differences between countries, clashes with religions, beliefs, economic shocks and other conflicts affect the economic situation of one or different countries around the world, there is an organization that seeks to promote global monetary cooperation that is capable of ensuring the financial stability, facilitate international trade, reduce poverty, promote a high level of employment and sustainable economic growth, which is awarded with the name of International Monetary Fund, better known by its acronym IMF.

This organization is made up of 184 countries and was created by an international treaty in 1945, in order to stimulate a good functioning of the world economy, with almost all the countries in the world. Likewise, it monitors the evolution of political, economic and financial measures, offering policy advice to member countries.

A support of this caliber capable of providing help and advice to countries that need support to solve their economy in times of crisis sounds quite attractive; however, the passage of history, wars and conflicts, has shown us an undeniable fact, any treaty can be affected by a conflict in between, thus influencing the alliances that the world could have and, therefore, altering the economy of it.

According to the official site of IMF, Russia’s invasion of Ukraine in 2022 has managed to reduce the projections of the global fund, which also continues to be affected by inflation and the number of confinements around the world that are still carried out due to the constant presence of Covid-19 in its different variants.

Read:  This is how the colors of your house influence your mood, according to RE / MAX

According to information from Statista, these events have led to the International Monetary Fund downgrades in 2022 down about 0.8 percentage point from its earlier global economic growth forecast for 2022 to 3.6 percent from 4.4 percent forecast in January.

According to the graph, the countries that presented the most negative projections from January to April 2022 were Germany with -1.7 percent; Spain, India and Great Britain with -1.0 percent; Japan with -0.9 percent; Mexico with -0.8 percent; the world in general with -0.8 percent.

Although all these figures result in negative figures after the context of the pandemic and the current invasion, it is thought that little by little the Global GDP registers its growth in the coming years.

According to the World Economic Outlook Database study published by the IMF, it is thought that the global gross domestic product (GDP) at constant prices represents 102 trillion US dollars by 2022a figure that will grow little by little until reaching 2026 and registering its maximum historical peak with 127 billion dollars, almost double since 2010 with 66 billion.

Although the IMF does not show good figures for this year, the forecasts show that world GDP will grow steadily in the coming times.

They create drinkable “Suavitel” and fulfill the dream of Internet users

“That is enough for me”; react to tour by Tec de Kidzania