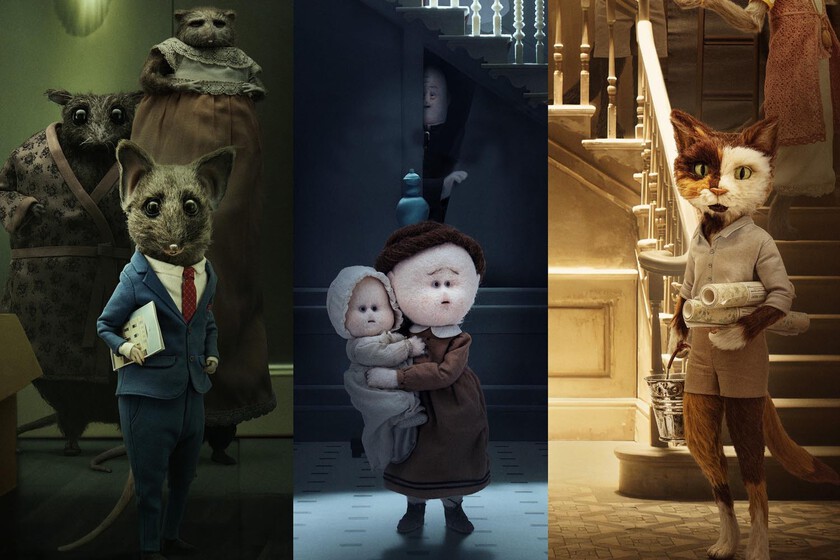 ‘The House’ (The House, 2022), one of the first Netflix original releases of the year, is a disturbing anthology of animation that has been announced as a dark comedy, but hides much more behind it. It is divided into three chapters, each directed by a different director, and all of which explore a different story related to the same house that connects each short film, which also have in common the delicious stop-motion technique, and a haunting tone.

‘The House’ begins with a story directed by Emma de Swaef and Mac James Roels, about a poor 19th century family who receive an offer they can’t refuse from an eccentric millionaire named Van Schoonbeck, who will build them a mansion for free if they leave his house. modest little house The new abode is huge, and a bit stuffy, and the eldest daughter, Mabel, discovers that the millionaire is constantly making changes, and his manager, Mr. Thomas, is slowly going insane.

As restrained as it is chilling, this first story is the one that most responds to a conventional horror story, a kind of ‘The Shining’ with dolls, very patient and atmospheric and with elements of terror close to surrealism. Its ending is quite grotesque and strange and works more like a David Lynch work.. And from the director of ‘Rabbits’ seems the style of the second story, which is starring mice and directed by Niki Lindroth von Bahr.

Already set in the present day, the middle segment is about a restorer who has put all his resources into renovating the mansion. When the job is done he realizes the house has a beetle infestation and before an open house he has to make sure the house is ready. Most potential buyers there show little interest, except an odd couple who claim to be “very interested” constantly.

A different tone of terror that is completed with a grandiose musical number with beetles reminiscent of the wacky cockroach pieces of ‘Joe’s Lair’ (Joe’s Apartment, 1996). In the third story, directed by Paloma Baeza and set in the near future, we enter the field of science fiction and the house is the only thing that remains dry in a completely flooded city.

Three visions and one look

It is now an apartment complex and the owner, a cat named Rosa, is also determined to renovate the mansion, but is unable to collect rent from two remaining tenants; a young man named Elias who pays him with fish and a hippie woman named Jen who pays him with crystals. When Cosmos, one of Jen’s mystical friends comes to visit, he tries to convince Jen that it’s time to leave the house.

It is the most fantastic and luminous story of the three, completing a diverse and unusual sample of dark tales with charming appearance, with talking animals and visual effects similar to those of a dollhouse, really a model that remains the great character of the film, captured in different ways by the three authors. But in each episode there is something below the apparent surface, something unsettling that never gets developed. And despite this, the house represents a kind of lifeline for all the characters and seems to attract the desperate.

The most interesting thing about ‘The House’ is that it is able to follow this thread with three different environments and not stop seeming to have the same thread and a sinister tone that oscillates between Edgar Allan Poe and gothic fairy tales, with an animation reminiscent of Ladislas Starewitch, Cegavske or Jiri Trnka, full of nightmarish textures that remain consistent thanks to the scripts of Enda Walsh, who knows how to convey the sense of strangeness and sinister darkness of the story to complete a delicious anomaly in animated film.

Deluxe shower with the most comfortable and stylish shower columns